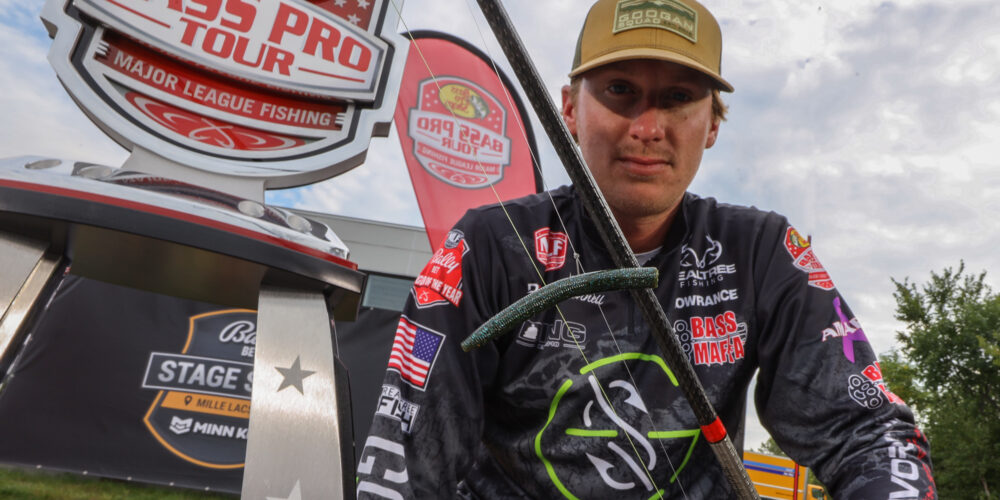 The 2022 Bass Pro season wrapped up on Minnesota’s Mille Lacs Lake, a fishery that’s known for big smallmouth bass. And for the six days of competition at Bally Bet Stage Seven Presented by Minn Kota, smallies showed up in bunches.

While SCORETRACKER® INSIDER showed that there were many ways to catch them during Stage Seven, some major trends emerged as nearly everyone in the Top 10 focused on the plethora of rocks in the lake, primarily with finesse tactics.

Here’s a rundown of how the top finishers caught them at Mille Lacs.

Dustin Connell’s 2022 season was remarkable, with three wins (all of which he claimed with the help of his Lowrance Active Target). On Mille Lacs, Connell hunted for irregularities.

“I was targeting boulders, isolated rocks, and anything that looked different,” Connell said. “Some places were on flats or long points and sometimes they were in the middle of nowhere. I found a lot of them scanning with side imaging and would then get on the trolling motor and pan around with ActiveTarget to see if any fish were living on them.”

Connell identified as many high-percentage areas as possible.

“I’d catch one or two and the fish would start to wise up, so I’d let them sit for a while,” he said. “I’d leave, go to the next spot, and come back later.”

The Alabama pro focused on water between 15 and 22 feet, primarily in the southeast corner of the lake. His drop-shot bait was a green pumpkin goby Googan Baits Rattlin’ NED Stick Bait fished on a drop-shot rig with a 3/8-ounce Googan Baits drop-shot weight. Connell also caught key fish with a wacky-rigged Googan Baits Lunker Log, also on a drop-shot.

David Walker made a thrilling run to close the event, but fell 4 ounces short of Connell. His second-place finish was just what he needed as he squeaked into REDCREST because of the excellent finish. To do it, he stuck shallow with a Z-Man Evergreen Jack Hammer ChatterBait.

“The pattern evolved throughout the event,” Walker said. “I started thinking it would be a deeper bite, but the more I fished, the more I gravitated to shallower water. The 3- to 5-foot range was where I did most of my damage.”

Fishing his 3/8-ounce green pumpkin ChatterBait with a matching Z-Man Razor ShadZ, Walker focused on breaks and would follow up with a Ned rig.

“So many times, there was just a low spot or depression and the fish would always be in that little break,” he said. “I think the break was more important than the depth. I would catch them winding a ChatterBait and once I knew I was around some fish, I would stay in the area and pick off more of them with a Ned Rig.”

“That hook has a stouter hook and was important for these big smallmouth,” Walker added.

Like others fishing on the final day, Michael Neal looked for isolated rock and one more ingredient: His best areas also had grass mixed in with the rocks.

“The bite was more consistent if there was some grass there, but it was really hard to find it,” he said. “I found some on my second day of fishing when I had some time to idle and look for areas. Most of it was between 10 and 18 feet of water.”

The drop-shot was his key weapon and he used a green pumpkin purple copper Big Bite Baits Scentsation SoMolly with a 3/8-ounce Kovert weight with a 1/0 light wire Gamakatsu hook.

“I also caught a couple of fish every day on a SPRO Hunter MD Crank in chartreuse and black back,” Neal said. “I would catch a few here and there with the crankbait, but the main deal was the drop-shot.”

Continuing his excellent string of finishes in 2022, Dakota Ebare notched another top five at Mille Lacs with the help of a drop-shot. He started the event targeting boulders, but discovered what would become his primary area on the tournament’s second day.

“I’d never been here and wasn’t sure what to expect, but knew boulders would be a factor,” Ebare said. “That’s what I did the first day and targeted isolated fish, but I knew it’d be better if I could find a group of fish. Then I stumbled onto my best area, a big flat with 17 to 18 feet of water and it had rock and a big belt of sand through it. The sand was key and there was a big school of fish there.”

After he found the area, Ebare rode that area for the rest of the event with a Strike King Half Shell in green pumpkin fished on a drop-shot rig.

This was James Elam’s third trip to Mille Lacs and his third top-five finish. He understands the lake’s nuances and primarily used a crankbait and drop-shot to continue his success in the “Land of 10,000 Lakes.”

“I cranked the mid-depth, anywhere from 8 to 14 feet of water with shad pattern crankbaits,” he said. “Every now and then, I’d throw a drop-shot with a wacky-rigged green pumpkin 4-inch Berkley Powerbait Maxscent The General. You had to stay back from the fish and let it sit in their face for a while before you could get them to bite the drop-shot.”

Mark Daniels Jr. kept it simple at Mille Lacs with a drop-shot, but only after some trial and error.

“I tried everything – a Ned rig, wacky rig, shaky head – but the drop-shot seemed to be the easiest way to get bites,” he said. “I was fishing isolated boulders, and if you could find a big boulder among other smaller rocks, that was the deal.”

Daniels focused on the 8- to 15-foot zone and utilized various drop-shot baits.

“That seemed to be the right depth because the deeper I went, the smaller the fish,” he said. “I fished a bunch of baits and would retie seven rods every night with different drop-shot rigs. I used a Googan Baits Rattlin’ NED and some Z-Man stuff like the Trick ShotZ and TRD. All of the baits were green and anything that looked like a crawfish seemed to be the best.”

Justin Lucas’ primary strategy was looking for areas others weren’t focusing on. For him, that meant heading to deeper water. His primary weapon was a drop-shot with a 4-inch green pumpkin Berkley Powerbait Maxscent The General.

“I tried to find fish deeper than most guys were sitting; a lot of my areas were between 20 and 25 feet deep,” he said. “This is a temperamental lake with the wind, so I fished all over this lake and changed based on the wind direction. It was rough the last day out there, and I had to try to force some new stuff and it didn’t work.

Alton Jones spent his practice before the event (and during a pre-practice scouting trip) putting in time on his electronics. He idled and searched for isolated boulders throughout the lake and it paid off as he won his group and advanced directly to the Championship Round.

“All I did in practice was look for boulders,” Jones said. “I had a bunch of them everywhere from 5 to 20 feet deep, but 7 to 12 feet was the juice. I tried to ‘windproof’ myself and had boulders in every section of the lake, so I could have something to fish with any wind direction.”

To catch his fish, Jones used a Berkley Powerbait Maxscent Flat Worm in green pumpkin or brown back, Texas-rigged on a 1/0 Extra Wide Gap hook paired with a 3/16-ounce weight.

Fishing the east side of the lake, Jesse Wiggins fished isolated boulders in water between 17 and 20 feet. His approach was straightforward, with the same bait and rig during all of his fishing days.

“It was pretty simple and just one thing; it was drop-shot only for me,” Wiggins said. “I was fishing a green pumpkin Jackall Yammyfish. It’s a Ned rig bait, but I wacky-rigged on my drop-shot. I fished it on a 1/0 drop-shot hook with a ½-ounce Titan Tungsten weight.”

Adrian Avena has experienced success on all three trips he’s taken to Mille Lacs in his career. He targeted isolated boulders with a drop-shot but also mixed in a swimbait this time around.

“I was fishing isolated boulders on the lake’s southeast corner,” Avena said. “Most boulders were in 12 to 25 feet of water, but some were shallower. I fished a Berkley Powerbait Maxscent Lil’ General Worm or Flat Worm on my drop-shot and used a bunch of different colors; I don’t think it matters and it’s more about the MaxScent. I also caught a few fish on a small black swimbait.”