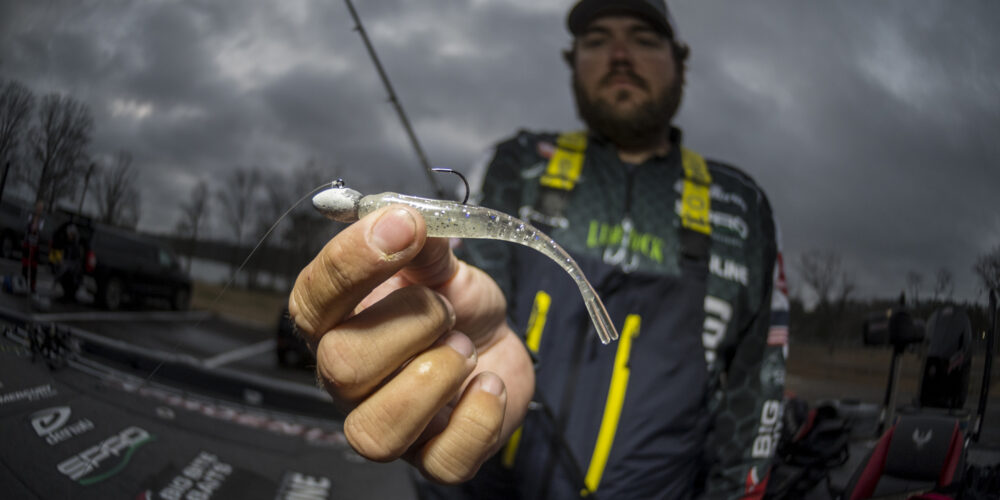 CULLMAN, Ala. – The quality of the fishing on Smith Lake during the Favorite Fishing Stage Three Presented by Mercury stayed steady for all six days of competition, despite drastically changing conditions from the start of the event to a rain-soaked morning in the Championship Round. Spotted bass made up the bulk of the numbers on SCORETRACKER®, but some healthy largemouth also made an appearance.

There proved to be many different ways to catch fish and anglers fished shallow and deep with various lures.

Connell’s approach was all with spinning gear and light line while watching his Lowrance ActiveTarget looking for baitfish.

“They were mainly eating threadfin shad, not blueback herring, so it was mainly small baits and shad colors,” he said. “I caught some with a Damiki rig and most came on a drop-shot with shad colored baits including the Googan Baits Drag n Drop. I fished the drop-shot with a No. 1 Owner Cover Shot Hook and ½-ounce drop-shot weight.”

Jordan Lee has plenty of experience on Smith Lake and purposely stayed close to the Smith Lake Park takeoff to maximize his fishing time.

“I tried to stay a couple of miles or less from takeoff,” he confirmed. “I could have run some other stuff, but there are so many places I wanted to fish. I decided to put my trolling motor down and fish instead of running around too much.”

As the wind picked up during the later part of the tournament, Lee went with a Berkley Stunna Jerkbait 112 (northern lights) while mixing in a jig around docks in the Knockout Round and a Berkley PowerBait MaxScent The General on a shaky head in the Championship Round.

“The only way I knew to catch numbers of fish was running windy points with a jerkbait,” Lee said. “The winds push those baitfish on a few select points. I caught some good largemouth during the week on docks with a ½-ounce tungsten jig in green pumpkin blue with a 3-inch Berkley Boss Grub in watermelon as the trailer.”

“I was chasing those bass that were roaming anywhere from 100 to 200 yards off of the bank and not relating to anything except the balls of baitfish,” Neal said. “They were anywhere from 5 to 40 feet below the surface and it seemed like the bigger fish were deeper. Up near the top, about half of them were nonscorable.”

Neal fished a drop-shot rig as well as a Damiki rig with a Big Bite Baits Jointed Jerk Minnow on a 3/8-ounce Big Bite Baits Swimmer Head jig head that’s equipped with a light-wire Gamakatsu hook that Neal said was crucial for hooksets in deep water.

Relying on his years of experience fishing Smith Lake, Jesse Wiggins started the event fishing small swimbaits and then switched to crankbaits to allow him to make the Championship Round.

“It was mainly a 2.8-inch Jackall Rhythm Wave and a Keitech on a 3/16-ounce head the first two days,” Wiggins said. “In the Knockout Round and Championship Round, the Jackall MC60 and SPRO RkCrawler crankbaits in crawfish patterns.”

His primary areas were points he’s fished his entire life and where he learned to fish a crankbait as a kid.

“I tried fishing the bank, but it didn’t work,” he said. “I went old school and fished points I grew up fishing. I ran as many as I could in a day.”

Oklahoma’s Edwin Evers spent the week fishing fast and burning the bank in a 20-mile section of the lake where multiple lake arms come together.

“I was covering a lot of water focusing on the rock in 4 to 6 feet of water,” Evers said. “If I saw a fish on my ActiveTarget, I’d throw a shaky head at it.”

His crankbait of choice was a Berkley SquareBull 5.5 in various craw patterns and brown mustard. Evers fished a Berkley PowerBait MaxScent Hit Worm in plum apple on his shaky head.

Wesley Strader stayed in shallow dirty water during the week, focusing his efforts above the Duncan Bridge towards the Brushy and Sipsey rivers.

“I was throwing a 1/2-ounce green pumpkin Z-Man Evergreen ChatterBait Jack Hammer with a Zoom Z Craw trailer,” he said. “I added some orange skirt material from All In Tackle to give it some color and the skirts are crawfish scented. The key was covering as many points as I could, and I stayed in the dirty water.”

Strader also landed a few on a shaky head and flipping mats with a tube and mixed in a red PH Custom Lures Flat P crankbait.

“A lot would miss the ChatterBait, and I could throw the crankbait in there and get some of them to bite,” he said.

Ott DeFoe did what he does best: he made a long run up a river and wound a crankbait. He started the event slowly and made a big run during his second qualifying day. His slow start wasn’t for lack of fish catching, just the size.

“I finally caught a scorable bass and it was my 38th fish of the day that day; I went two periods with a zero to start the day,” he said, noting that he changed areas slightly and found bigger fish.

DeFoe decided to make the long run mid-tournament and caught his fish on his Rapala Ott’s Garage Slim crankbait and a Rapala DT 6 in various colors.

“I was running 35 to 40 minutes each way because I felt like the lower end was getting too much pressure,” he said.

Jacob Wheeler dominated his group’s Qualifying Round yet again by hunting groups of suspended bass with his forward-facing sonar.

“It came down to chasing the pelagic spotted bass that weren’t anywhere near the bank,” he said. “The water came up so fast before we got here that some fish didn’t adjust to it and there were groups of single and double fish just suspending out there.”

“The primary bait was the No. 9 size Jigging Rap in white and chrome black,” he said.

Brent Ehrler had a one-two punch of a Yamamoto Senko and a crankbait. Both accounted for fish during the week and he changed his approach based on the sun and depth he was fishing.

“Fish were looking down for crawfish more when it was cloudy and looking up for baitfish when it was sunny,” he said. “I was fishing for bass suspended under floats on deep docks over 100 feet of water and would throw a wacky-rigged Senko in natural shad for them while watching my Garmin LiveScope and a Neko-rigged Senko in green pumpkin to fish on the bottom in shallower water.”

Ehrler also caught a handful on a small swimbait and added key fish with a Lucky Craft 1.5 DD crankbait each day in a “Brent Ehrler custom” color that he doctored with markers.

“I caught the most on the bladed jig, but scrapped up some each day with the JerkMaster Jr.,” Howell said. “I was focusing on the original shoreline up the river from takeoff. The water had come up so much and the bank grass was flooded, but the fish were still relating to it.”