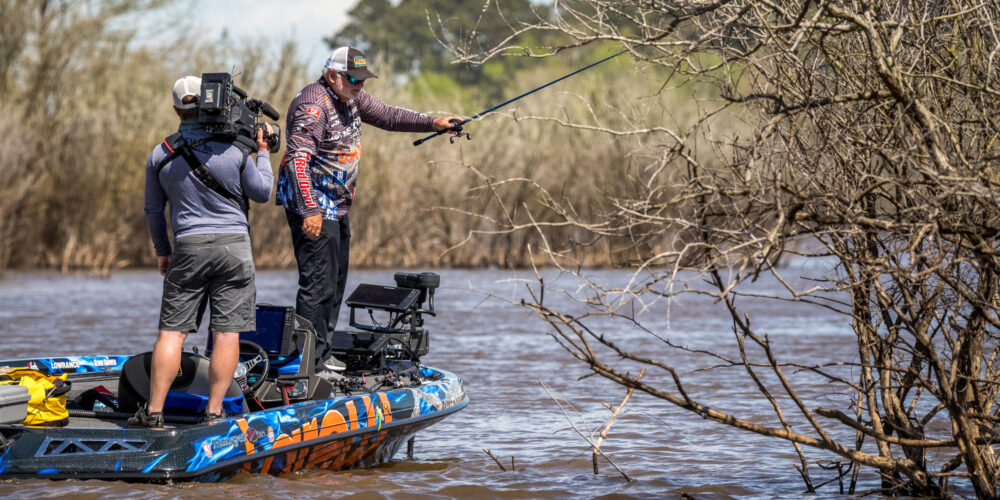 JASPER, Texas – The top 38 anglers from Groups A and B collided today in the Knockout Round at Sam Rayburn for the Toro Stage One Presented by Power-Pole. It was a repeat of previous days as anglers are fishing on all ends of the lake, with varying techniques and patterns.

Around lunchtime yesterday, Justin Lucas found the clue he’s been looking for all week and shifted his focus from spawn-oriented bass to prespawn locations.

“This was almost a really bad tournament,” Lucas said. “I was sitting in 37th place in my group yesterday mid-morning, and that 7-14 yesterday gave me a clue to start looking for new areas, and I had a really good round today. I just have to put my head down and catch them. That’s all there is to it.”

Lucas is mixing in moving baits and finesse tactics, and both are producing well for him. He added a 6-7 big bass today and eight others for a total of 36-13.

Cliff Pace is one of the outliers of the remaining 10 anglers as he’s mainly targeting fish away from the bank and utilizing a jerkbait. His 10 bass today were the most of anyone in the Knockout Round.

“I’m primarily throwing a Jackall Rerange jerkbait on the edges of hydrilla,” Pace said. “I’m focusing in and around spawning areas, and some fish are prespawn and some are postspawn. I think the vast majority of what I am catching are done spawning.”

He found two different patterns in practice but stuck with the jerkbait due to the conditions in the area when he was fishing.

“It’s kind of a Russian roulette deal for me because that bite will die if it slicks off and the wind doesn’t blow some,” Pace admitted. “I put all of my eggs in this basket because it’s not easy for anyone right now. I can’t believe the fishing as hard as it is, and I’m thankful for every one of the fish I’ve caught so far.”

For the third day in a row, Luke Clausen went to work with a Z-Man Evergreen JackHammer ChatterBait, but he also mixed in a wacky rig with a Z-Man ZinkerZ soft stickbait today.

“The ChatterBait has been the star all week, but I caught about half of my fish on the wacky rig today,” he said. “I was getting a lot of short strikes on the Jack Hammer and would follow up with the ZinkerZ and catch them.”

He’s focusing on shallow bushes and will do the same thing again tomorrow.

“I looked for the windiest areas I could find and just hit everything I could see in front of me,” he added. “I caught 40 or 50 fish today, but most of them weren’t scorable. I’m excited about tomorrow because I’m getting plenty of bites. It just depends how many of them will be over 2 pounds.”

Jeff Sprague is the lone Texan remaining in the field, and he’s keeping it simple by pitching to brush. All eight of his bass today were caught with that method.

“I flipped all day long,” he said. “I’m using a Strike King 3X ElazTech Zero with a 3/8-ounce weight,” Sprague added. “I’m using the new Team Lew’s Pro SP Speed Spool skipping reel with a 7-foot medium-heavy Team Lew’s Pro Speed Stick. I like that shorter rod to be more accurate for getting in and around bushes.”

Looking ahead, he’s ready for Championship Round.

“I’ve got more work to do, but it is still anybody’s ball game since the weights zero for tomorrow,” he added.

Known as one of the best at flipping and pitching shallow cover, veteran pro Tommy Biffle is doing just that this week.

He boated seven bass for 22-7 by keying on trees and brushes with his namesake Gene Larew Biffle Bug, while also mixing in a plastic worm and a spinnerbait.