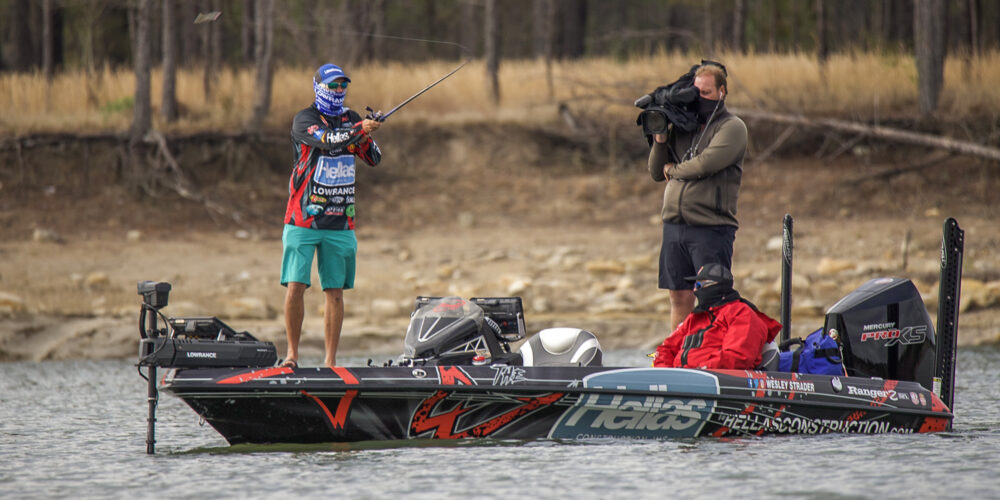 JASPER, Texas – After three days of competition on Sam Rayburn Reservoir at Bass Pro Tour TORO Stage One presented by Power-Pole, multiple different baits and patterns have been effective – from jerkbaits and swimbaits to fishing deep with finesse tactics. So far, no clear, winning pattern is emerging. Here’s how the top five anglers from Group A caught their fish as 19 anglers advanced to the Knockout Round:

Running a pattern similar to his win at REDCREST on Lake Eufaula, Connell is targeting fish with a jerkbait while watching his Lowrance ActiveTarget forward-facing sonar; he’s also mixing in slower techniques like a Carolina rig.

After catching 29 pounds, 11 ounces to start the tournament, Connell added six bass for 20-8 on Tuesday, most of those coming early in the day.

“I have a really good starting spot,” Connell said. “It got a little too calm, I think, and I was having trouble catching them on a jerkbait the rest of the day. The first day it stayed windy, and I was able to catch them steady all day.”

After Connell realized DeFoe was too far ahead to catch, he switched to practice mode and idled, looking for new areas.

“I have an idea of where to go Thursday for the Knockout Round,” Connell said.

Shuffield led the tournament after the first day, slipping to third after tacking on four bass for 11-14 on Tuesday. While it may look like Spencer either struggled or took his foot off the pedal to start practicing for the next round, that wasn’t the case. Shuffield caught plenty of fish today, but the 2-pound minimum was his demise as he only had four scorable fish.

“I tried all day to catch them,” Shuffield said. “My boat official kept track, and I caught 56 bass, but only four were over 2 pounds. I couldn’t get any that were big enough.”

Shuffield did his damage with a drop-shot and jerkbait over grass and on deeper points, just as he did on the first round. He’s convinced that most of the fish he’s catching are postspawn.

“A lot of them are really skinny and have bloody tails,” he said. “But there has to be another big wave of them moving up to spawn. Something weird is happening because it doesn’t matter what you do; they all seem to be the same size. I also tried up shallow flipping with a big weight and they were all that same size.”

After catching 10-6 on his first day, Strader rebounded with six bass for 28-15. Included in that haul were two Texas-sized largemouth weighing 6-1 and 8-9.

The bigger of those two came on a 7-inch swimbait with a 7/0 TroKar weighted hook; the 6-1 ate an Evergreen Z-Man Jack Hammer ChatterBait with a Zoom Z-Swim as the trailer. Strader also added fish with a jerkbait today.

His change in fortunes between the two days was due to a change in locations.

“I decided to stay in the left fork of the lake today,” Strader shared. “I went there in practice and saw a bunch of baitfish activity on my Lowrance ActiveTarget. It’s an area I’ve caught them in over the years and they were there today.”

Strader is hopeful he can continue the momentum for another day and advance to the Championship Round.

“I hope I can expand on what I figured out today,” he said. “I feel good and not good at the same time. The fish are really scattered right now, and I think they’re confused. They don’t know if they want to go to the bank or not.

VanDam saw drastically different conditions when he started the morning. His catch total went from 27-12 on 10 bass to 6-6 on just two bass today.

“I think the storms and wind from yesterday really changed things a bunch,” VanDam said. “The water got dirty and everything changed. I had to go to totally new areas to even get a bite.”

After struggling to get a bite, he switched to practice mode when he realized he didn’t have a chance to catch the leaders.

“SCORETRACKER® wasn’t moving, so I went and looked for more areas,” VanDam said. “I’m trying to find some things that looked right, but all I was catching were little males. I’m scratching my head a little bit; this is one of the best lakes in the country and it should be much better right now.”

All of VanDam’s Day 1 fish came on a Strike King KVD 300 Jerkbait and 300 Deep, but he’s re-gearing for the rest of the week.

“I’m keeping an open mind but know the fish are coming to the bank,” VanDam said. “I know I’m going to have to make that change and will be rigging up frogs, buzzbaits, and flipping and pitching stuff.”