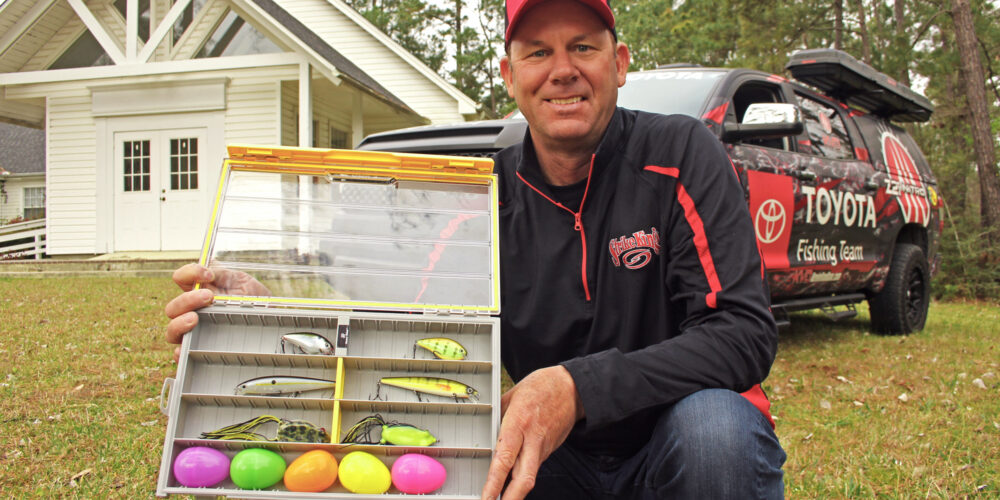 For Kevin VanDam, most Easter weekends have involved a huge in-store promotion at his family’s well-known D & R Sports Center retail store. Kevin met many of his fishing heroes at the store as a young man and has since served as one of many famous pros who attend the annual event to meet with fans.

There’s no actual show this year at D & R, but Kevin chose three categories of lures he says should work just about anywhere in America as Peter Cottontail comes hopping down the bunny trail.

“April is a time when everything heats up in the bass fishing world, even up north,” VanDam says. “And across the south, bass are totally relating to the spawn. So there’s a ton of fish shallow, and Easter weekend is just a great time to be on the water.”

Shallow squarebill crankbait – “There are very few lures that rival a KVD 1.5 squarebill in water less than 6 feet deep. And because there are so many fish shallow at Easter, it’s a great choice. The whole key is to make sure it’s crashing into logs, rocks, or stumps when you’re retrieving it.”

Jerkbait – “This is just a phenomenal prespawn bait anytime you’ve got fairly clear water. From Table Rock to Lake St. Clair, and all sorts of fisheries like those, a KVD 300 jerkbait is pretty tough to beat at Easter time. And because the water is getting warmer, you don’t have to pause for several seconds between jerks like you do in late winter.”

Frog – “Some people might be surprised that I’d pick a topwater frog as one of three baits at Easter time because a lot of people think of frogs as summer lures. But that’s not true. Anytime the water temp gets around 58 or higher … it’s frogging time. Especially when the water is high in the springtime and a lot of great shallow habitat is a little flooded.”

“Man, I think if people will try one of these three lures over Easter, it should make a great holiday even better. We’ll go to church, then head to my mom and dad’s for a ton of great food. They’ll be an Easter ham of course, but we’ll be grilling too. And who knows, maybe we’ll even deep fry some bluegills we caught through the ice this past winter,” VanDam grins.