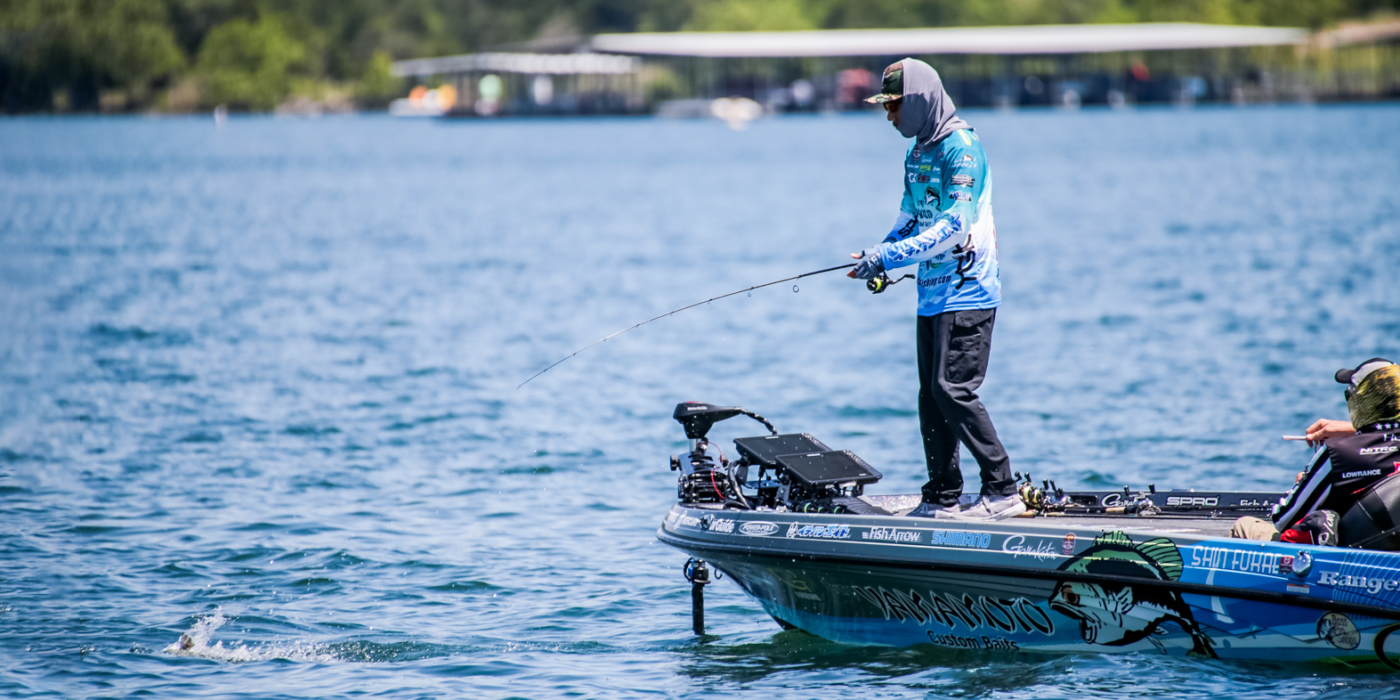 Shin Fukae and Jacob Wheeler combined for over 240 pounds of bass on Table Rock during Friday's Shotgun Round. Photo by Garrick Dixon

BRANSON, Mo. – One week after the MLF Bass Pro Tour field rewrote the league’s record books with an astounding display of fish-catching efficiency on Table Rock Lake, Jacob Wheeler was at it again.

Fishing the first tour-level afternoon/evening competition day in recent years – a noon-to-8 p.m. game day – Wheeler wrote his name in the MLF record books twice: Once for most weight caught in a single day of competition, and one for most scoreable bass landed in a day.

By the time lines came out for Friday’s Shotgun Round at the Bad Boy Mowers Stage Seven Presented by Covercraft, Wheeler had racked up 88 fish for 129 pounds, 14 ounces, a 17-pound cushion over Shin Fukae in second place (112-4) and the most productive day in the league’s young history.

“Unbelievable,” Wheeler said simply as he strapped his rods down after the day. “Just unbelievable.”

For the better part of the day, Fukae appeared to have the round under control, grabbing the lead early in the second period and becoming the first angler to break the 100-pound mark early in the third period. But Wheeler stayed within range, and eventually overtook Fukae in the final hour.

While Fukae slowed noticeably – he weighed only three fish in the final 90 minutes of competition – Wheeler put 20 fish on SCORETRACKER® in the same twilight-hours time frame, almost all of them on a swimbait.

Wheeler’s first-place finish in the Group A Shotgun Round is the fourth time in the 2019 season that he’s finished atop a Bass Pro Tour round.

If you needed proof about how differently a lake can perform for an individual angler from one week to the next, look no further Fukae. The Mercury pro not only hammered Table Rock for over 112 pounds, he completely flip-flopped his results from a week ago in the Stage Six event on Table Rock.

Fukae weighed in just 28-5 in his Stage Six Shotgun Round and weighed in 51-9 for the entire event, finishing 75th in the 80-man field. In Friday’s return to Table Rock, though, Fukae beat that weight in one period. After a productive first period in which he weighed in 27-9, Fukae stacked 51-10 on SCORETRACKER® in Period 2 on Friday, connecting with 29 largemouth and one spotted bass (all on a drop-shot).

Second Shotgun Round Ahead

A new group of 40 anglers roll out onto Table Rock Saturday at 12 p.m. CT for Shotgun Round 2, under very similar conditions as their Group A counterparts. Table Rock is still slightly rising but stabilizing – it’s risen just under a foot in three days – and has gained one degree of water temperature, up to 76 degrees.

The field will carry their Shotgun Round weights into Elimination Rounds on Sunday and Monday. The Top 20 anglers from each of those Elimination groups will advance to a 40-angler Knockout Round on Monday, June 3 – weights will be zeroed, making the Knockout a one-day scramble. The Top 10 anglers in the Knockout Round will advance to the Championship Round on Wednesday, June 5.

Competition begins Saturday at 12 p.m. CT, with live, official scoring available via SCORETRACKER® on MajorLeagueFishing.com and on the MLF app. The MLF NOW! live stream begins at 11:55 a.m. CT with coverage of Period 1, with Steven “Lurch” Scott and Rob Newell calling the live action. Full coverage continues at 2:30 p.m. when Chad McKee, JT Kenney, Marty Stone and Natalie Dillon pick up the commentary and analysis until lines out at 8 p.m. There will be no Berkley Postgame Show until the Championship Round.