Why Eufaula is Truly the Big Bass Capital 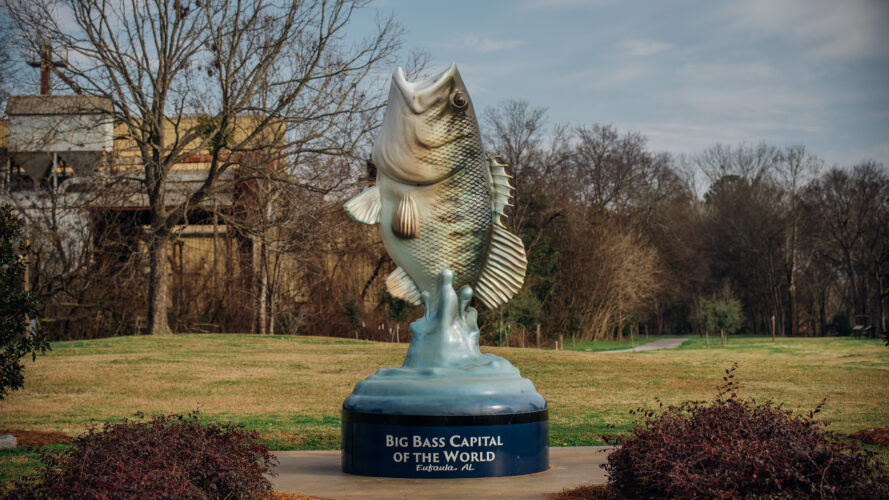 EUFAULA, Ala. – Many communities around the country benefit from having a great bass fishery nearby, as anglers travel great distances to fish quality waters. Communities like Clewiston, Florida and Dayton, Tennessee come to mind as fishing-friendly towns situated on excellent bass fisheries.

But while many villages stake their community pride on the bucket-list fisheries they were built around, there’s only one “Big Bass Capital of the World”: Eufaula, Alabama, the host of last week’s historic REDCREST.

As you drive into the town of Eufaula, a sign proudly announces its claim to the “Big Bass Capital” title.

The bass references are endless in this community on the Alabama side of the Chattahoochee River, where Lake Eufaula serves as the border between Alabama and Georgia. Large Mouth Coffee Company is a popular spot in the quaint downtown stretch of Broad Street. Young’s Big Mouth is a convenience store located near Lakepoint State Park (which served as tournament headquarters for REDCREST).

Phil’s BBQ is another must-stop for bass heads: bass fishing memorabilia and photos signed by professional anglers who have eaten there adorn the walls, next to BBQ awards.

There’s also the famous “Leroy Brown” bass statue on Broad Street, a memorial for a largemouth bass caught by Mann. Leroy quickly became a legend after being placed in a 38,000-gallon tank at the now closed Tom Mann’s Fish World. When Leroy died in 1980, more than 1,200 people attended his funeral.

Mann is even more legendary in town: Tom Mann Memorial Highway (Highway 431) and Historic Site are dedicated in his honor, and he was named “one of Alabama’s most unforgettable faces” by the Alabama Bureau of Tourism and Travel. In addition to creating the bait company, Mann was part of professional fishing from the beginning, having finished second in the first Bassmaster Classic in 1971.

According to Eufaula’s mayor Jack Tibbs, Mann was also ahead of his time getting youth involved in tournament bass fishing.

“It was before social media and he would promote his youth bass fishing tournament in magazines,” Tibbs said. “(MLF pros) Chris and Bobby Lane would come up as kids and fish the tournament and make a weekend of it. Bobby won it one year.”

Eufaula became the capital of bass fishing when a creative tourism director came up with the nickname, which has stuck with the town ever since, according to Mayor Tibbs.

The mayor is an avid tournament angler himself, having finished fourth in the 2019 Phoenix Bass Fishing League Bulldog Division tournament on Lake Eufaula. He’s a tireless promoter of the town and celebrates the benefits of his community hosting bass tournaments like REDCREST.

“A town should utilize their assets, and the lake is one of our biggest assets,” Tibbs said. “It’s known for great bass fishing, but catfish and panfish fishing is also excellent. We enjoy having organizations like Major League Fishing come to help showcase our town and bring anglers here to help support our small businesses.”

Mann’s Bait Company, Big Bite Baits, Strikezone Lures, Humminbird and a handful of other companies are located near Lake Eufaula; Southern Plastics Company, which pours the soft plastic baits for some of the most recognizable brands in bass fishing, is also headquartered in Eufaula.

Strikezone is owned by Tibbs, and produces the legendary Ledgebuster spinnerbait, a bait used by many anglers during both REDCREST and the 2020 Bass Pro Tour event held on Lake Eufaula.

The Ledgebuster is a jumbo spinnerbait with sizes up to 2 ounces, and was designed by the mayor himself.

“Years ago, guides were wrapping lead around spinnerbaits to get them deeper here on Eufaula,” Tibbs said. “That intrigued me, so I found someone to make me some from a muskie spinnerbait with big blades. We modified it to bend the wires more like a traditional bass spinnerbait.”