Everyone is looking for a few kickers to make the cut 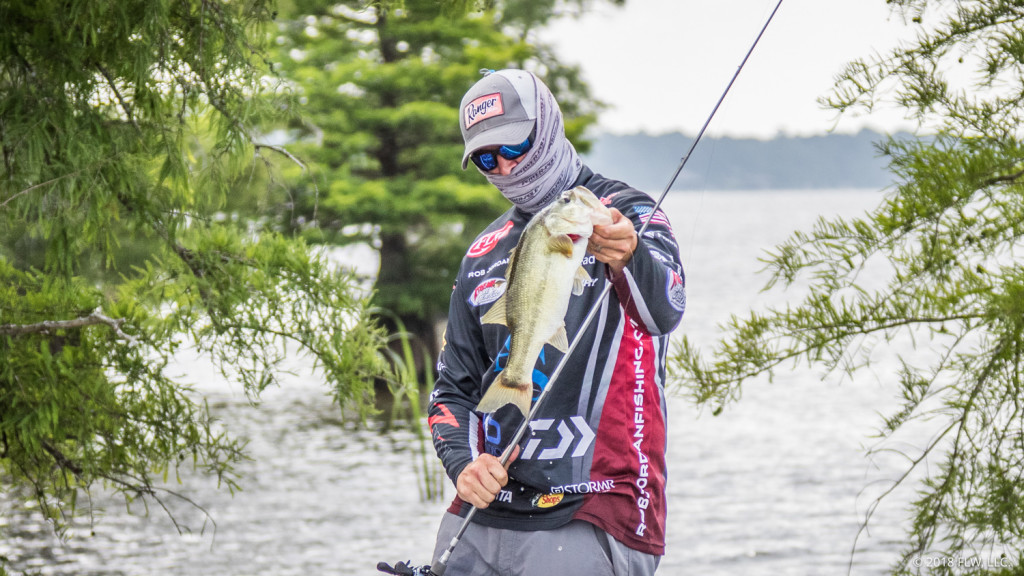 Fishing has without a doubt been trickier today on Cross Lake. We’ve seen some anglers stay steady, but for the most part weights are down. However, the afternoon bite may be the key to some last-minute kickers and limits. Make sure to tune into weigh-in this afternoon on flwfishing.com at 4 p.m. CT. to see who makes the top 10.

Deaver has 22 1/2-pounds with a 2-pounder in the livewell. If he culls up things will get really interesting atop the leaderboard.

Missouri pro Steve Ruff has three keepers including a 4-pounder. Not long ago he had nothing.

Grant Kelly has three for eight pounds. He hasn’t landed a keeper since 10:30 but in the last hour jumped off a 3 and a 5.

Just like that LeBrun boated a 4 1/2-pounder to complete his limit. The fish came out of a foot of water on a frog. The Bossier City local is now focused on culling a few some small ones but he says a weight has been lifted off his shoulders. 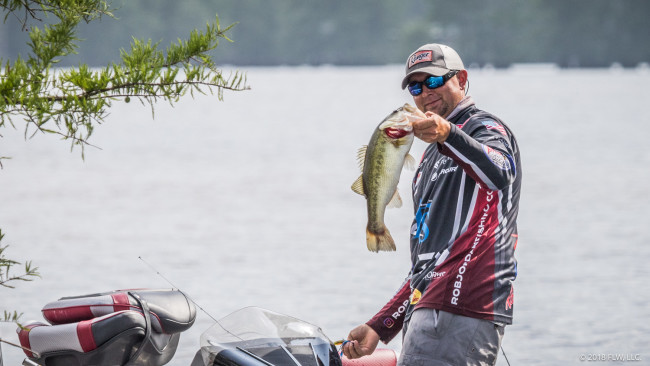 Today Cross Lake seems to be much more difficult on the 49 pros competing in the All-American. The fishing pressure paired with different weather seems to be taking its toll. There could be a lot of swapping in the standings this afternoon.

Loren Torok was fishing duck blinds but has not had much luck. He said he did not fill out his limit until about this time yesterday so he is not too worried.

LeBrun was on a long dry spell but just boated No. 4. – a 1 1/2-pounder. He’s fishing back in the cypress trees on the northwest shore next to Richard Fleming Park. He really needs to complete his limit and make a few culls.

Rob Jordan is now up to four fish on the day. Another good one and he could be pushing his weight into the upper teens.

Chris Daves was in third place heading into the day. At the moment, he only three small fish that may go for 5 pounds.

Tyler Morgan is also in the same situation as Daves with three small keepers. 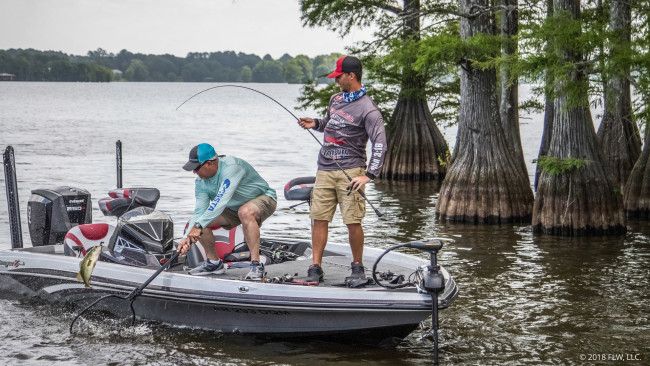 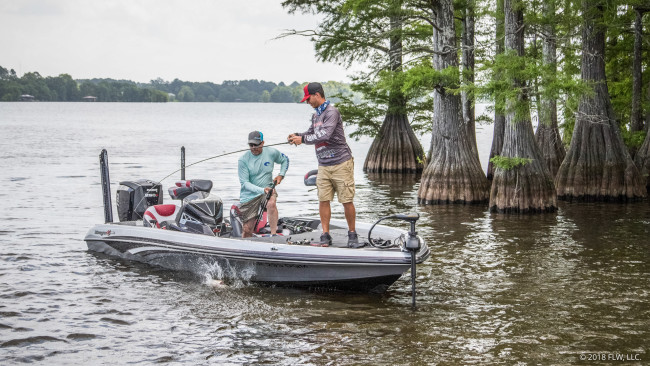 Brandon McGinnis had four fish in his boat when we found him – one being a 5 1/2-pounder. He had the frog out but then switched to flipping. Right then, he caught a 3-pounder to fill out his limit. Since he started the day in 27th place he will need a lot more weight to contend for a top 10 spot.

Adam Wagner seems to be figuring things out a little. He is up to four fish worth 8 pounds. Clearly, they are all small fish, but fish nonetheless. About a 10-pound upgrade will put the Tennessee pro in good shape to make the top 10. 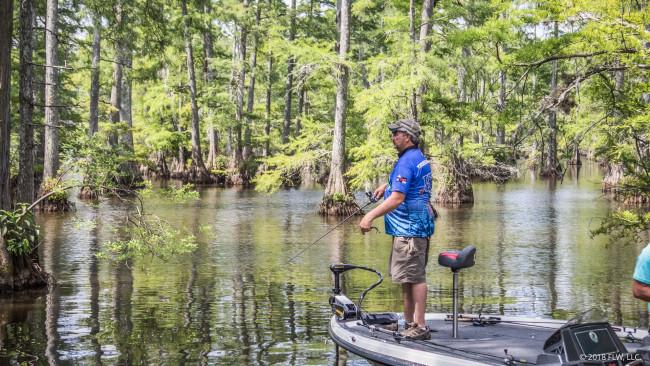 Maryland pro Brian Trieschman has had a tough day on the water. So far, he has zero fish in the box. The only excitement he has to report is pulling a crankbait from his co-angler’s leg two times. We’re not sure what happened the first time, but on the second Trieschman’s co-angler Nathan Colwell happened to get his crankbait wrapped up in a tree that he was throwing at. Then while pulling it free, the bait shot loose and wound up in his leg. This is the second time Colwell has been hooked in the leg today. Their day can only go up from here!

An angler having a good day is John Duvall. The Georgia pro started the day in ninth place. Currently he has a 15 or 16-pound stringer. He will likely need to add a few pounds to make the day-three cut.

Kyle Weisenberger is working on a good limit. He is sitting with three good ones and two little ones. He thinks if he can cull the two small ones for a few four-pounders he has a chance to crack the top 10. 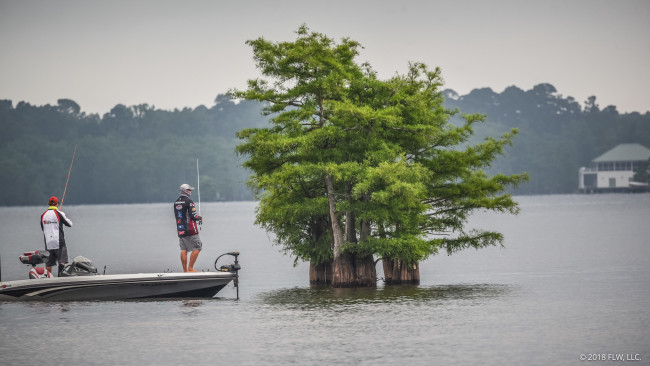 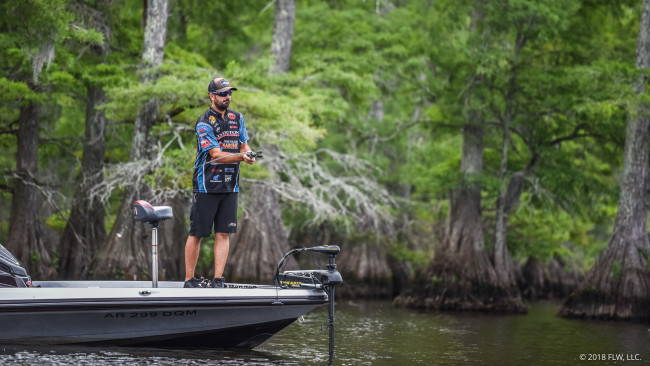 The western end of Cross Lake is getting pounded on by boats at the moment. This was the most productive area from yesterday. We are finding a bunch of boats in and around the cypress trees. Included in the mix are Louisiana pros Lebrun and Deaver. 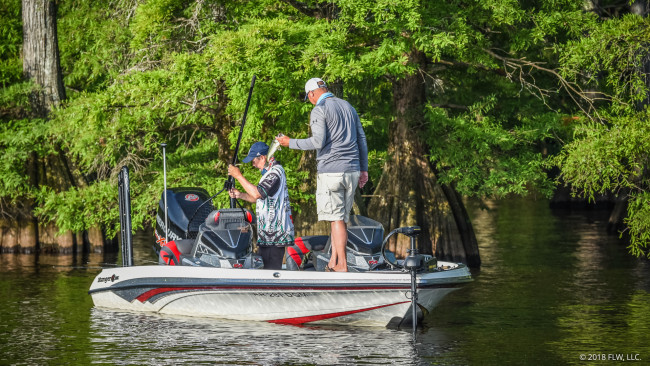 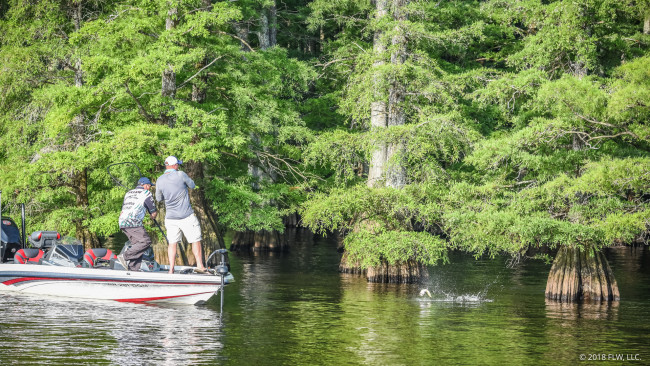 Rob Jordan was sitting in sixth place heading into today. Right now he has caught three fish giving him a total of 12 pounds. A kicker of two would be prime for the Georgia pro.

Day two has not treated Adam Wagner all that well. He only has one small fish so far. Luckily he still has plenty of time for him to figure things out.

Louisiana pro Randy Deaver is sitting with two in the boat for about seven pounds. Unfortunately, he had back-to-back misses on a good one. Deaver said, “the shad have gotten active and that’s the deal.” 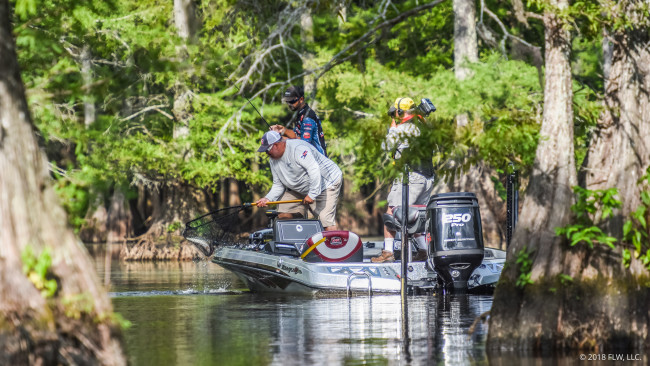 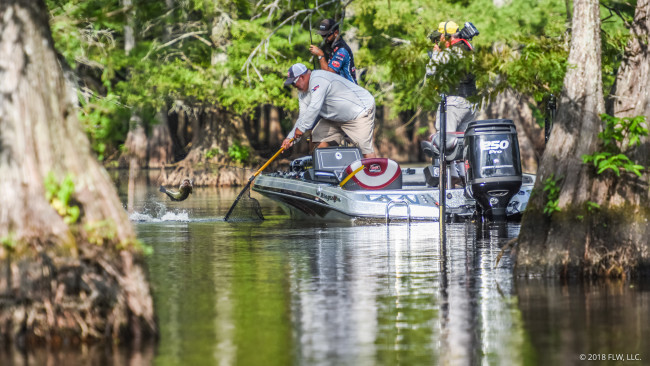 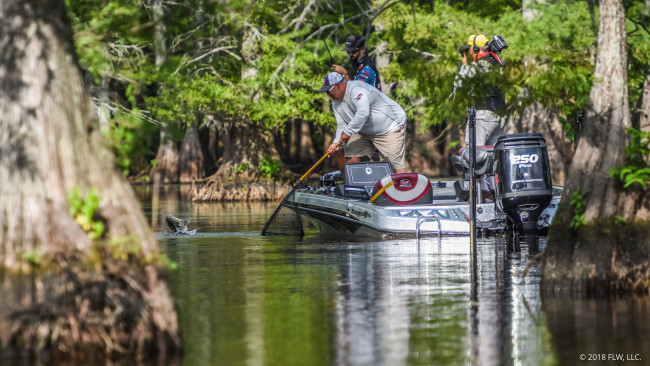 Nick LeBrun now has three fish in the boat. Fish No. 2 is a chunky 4-pounder. The third happened to be a small fish that will go a pound and a half. No. 3 hit on a topwater bait near a cypress tree. LeBrun said, “I will need to get rid of that one but it’s still a fish.” 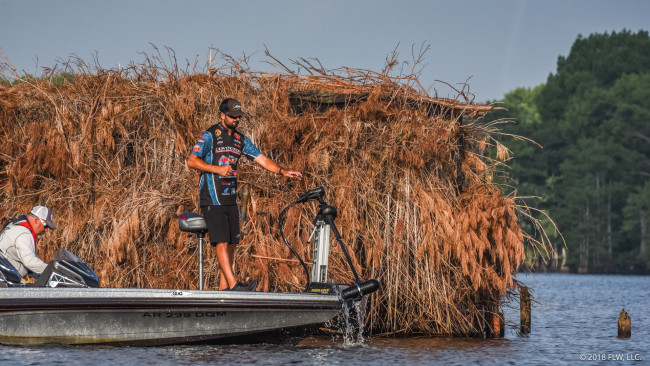 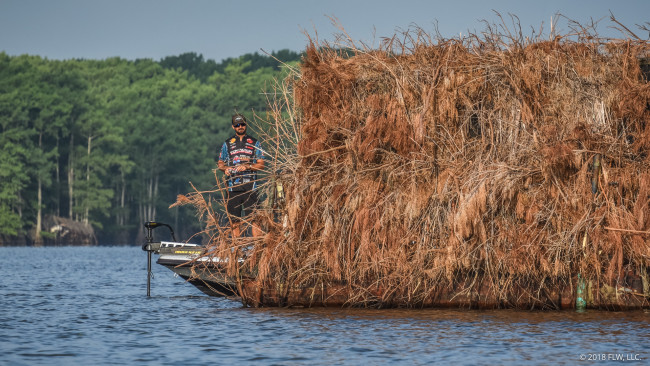 If you checked out yesterday’s photos from Cross Lake (here) you may have noticed multiple anglers fishing duck blinds. The day-one leader Nick LeBrun just gave a few blinds a look, but did not catch any. Shortly after, Lebrun bagged his first fish – a 3-pounder. He also broke off a giant. The Bossier City local will need to land those big bites in order to keep his lead.

Heath Pack is on the scattered tree and dock pattern. The Georgia pro has brought in two fish for four pounds. It seems as if many anglers are targeting the same types of areas. The stretch of docks Pack wanted to target already had two boats on it. 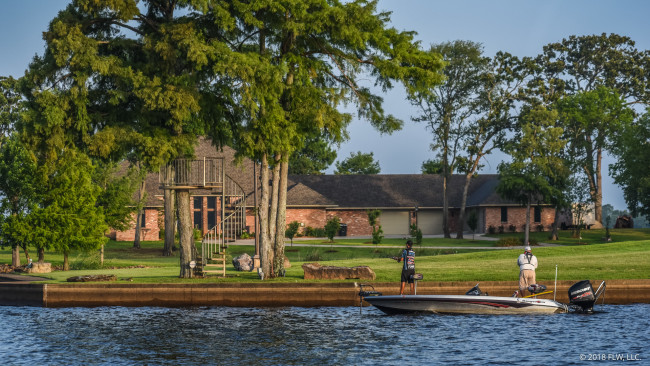 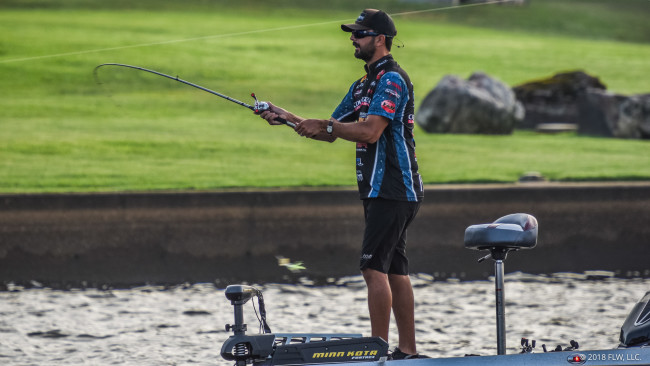 The first spot tournament leader Nick LeBrun stopped on was a retaining wall. He thinks the wind and waves may be pushing fish up against the wall. Right now, he is working a buzzbait. If this spot does not work out he plans on going back to his “good stuff.”

Tyler Morgan just missed a bite. He fired back with the frog then a spinnerbait but couldn’t get another take. A few casts later he hooked a decent fish and lost it at the boat. Morgan’s  fish from earlier came on a targeting isolated trees near a seawall.

Tyler Morgan has one in the box and the boats haven’t even finished leaving takeoff.  Morgan said, “It’s not a biggun but I’ll take it.” Note that only 49 boats are taking off this morning. 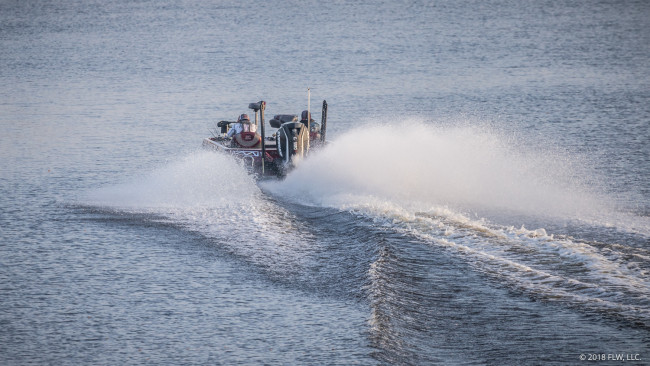 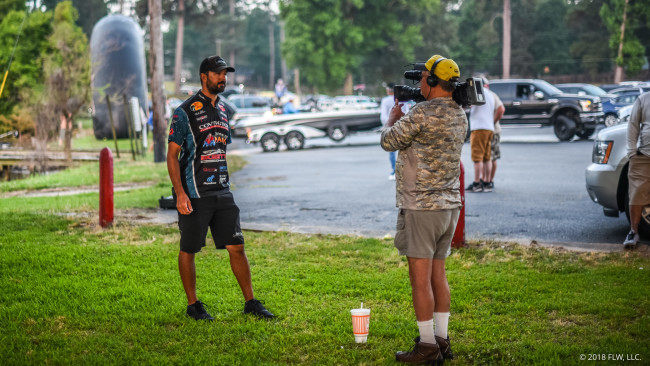 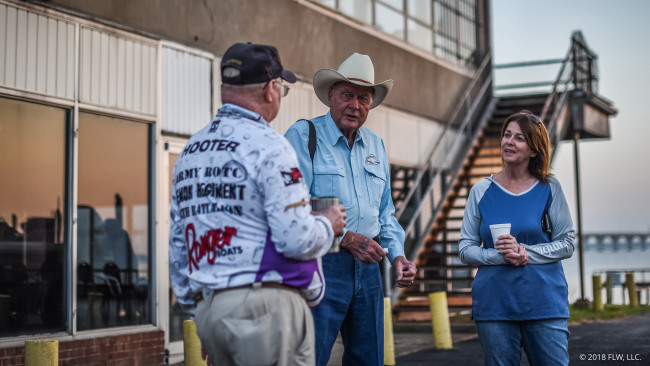 Cross Lake showed out on day one of the T-H Marine BFL All-American – not only is it very scenic, it is also loaded with big bass. Local stick Nick LeBrun got things kicked off in style with 26-9, but eight boaters brought more than 20 pounds to the scale and there was a pile of 4-pounders caught.

LeBrun and most of the other anglers are fishing around the lake’s plentiful cypress trees. Cross isn’t a very big lake and has a reputation for being fickle, so it’s possible that we see a drop off or change up in a big way today, but based on day one even a slight drop would still produce impressive weights.

With basically everyone fishing cypress trees, the divide is mainly between those fishing slow and those fishing fast. Some anglers are whisking through the trees and trying to pick of aggressive bass or trigger bites. Others are taking their time and picking everything apart. Now that the lake has seen some pressure it will be interesting to see how the fishing responds.