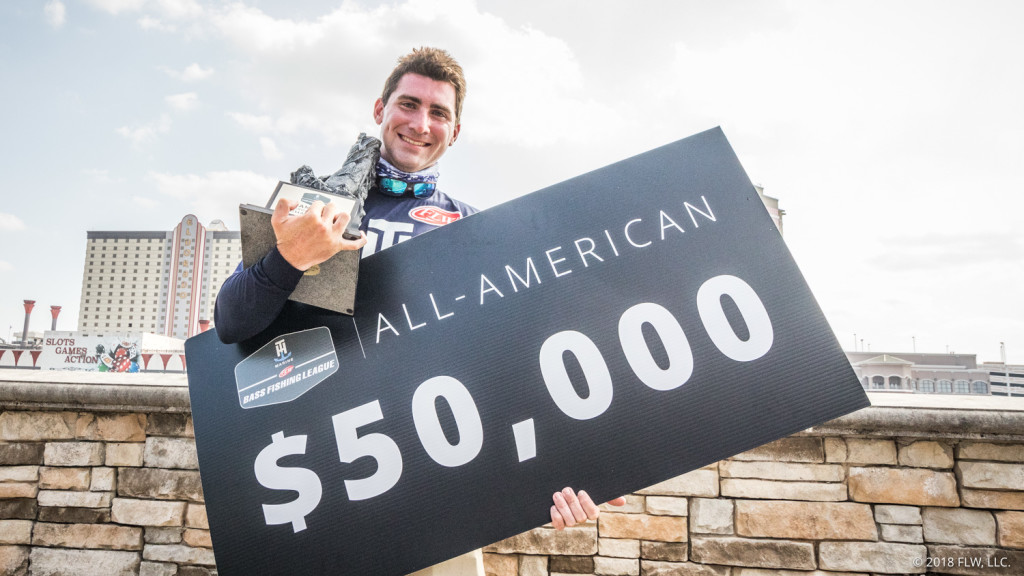 Matthew Bouldin is a minister by trade and an accountant in training (he’s studying at Tennessee Tech), but this week he added T-H Marine FLW Bass Fishing League All-American co-angler champion to his resume.

The Smithville, Tenn., co-angler won the All-American title on Cross Lake with a final-day rally of 18 pounds, 4 ounces to snatch the win away from Jesse Parks of Avondale, Ariz., who led for the first two days, by a margin of only 4 ounces.

Bouldin caught limits each day while fishing with Pat Upthagrove, Nick Deering and Roger Fitzpatrick. He started Saturday’s championship round in third place, having weighed in qualifying-round limits of 16-9 and 9-11. But today, Bouldin out-fished his pro partner to close a gap of more than 5 pounds and walk away a champion.

“I haven’t even started to process this,” says Bouldin. “I’m still trying to take in day one, when I struggled so much.”

Bouldin says every day was a challenge. He relied heavily on a combination of shaky heads comprised of 1/8-, 3/16- and 5/16-ounce Buckeye Lures Spot Remover heads and either Zoom Trick Worms or Zoom Mag Finesse Worms, as well as two sizes of the River2Sea Whopper Plopper.

“The first two days were a struggle. I basically fished all the same stuff,” Bouldin says.

His primary targets all three days were scattered cypress trees and docks.

“I had five keeper bites both of the first two days,” he adds. “I caught the majority on a shaky head, but yesterday I had two on the smallest size Whopper Plopper.”

Today, Bouldin got seven bites, caught five and weighed in three bass caught with a 3/16-ounce shaky head and a junebug Mag Finesse Worm. The other two came on Whopper Ploppers – one on the smallest model, and the other on the largest model.

Bouldin fished the 1/8-ounce shaky head on spinning tackle, and the heavier heads on baitcasting tackle. He started out flipping the 5/16-ounce model, but midway through the tournament he realized the heft of the Mag Finesse Worm made it possible to flip and skip with the 3/16-ounce head. That became his go-to “heavy” model for the final day. It was a big producer in the end because he could fish with baitcasting tackle more easily and efficiently in the wind or when his boater was covering water at a fast clip.

“I just had to keep casting,” Bouldin says, “whether my boater had already cast there or whether he hadn’t. I never knew where a bite was going to come from.

“Today was a real struggle as well. The majority of my bites came when I was doing something different [than his pro partner]. Good fortune had a lot of play in it.”