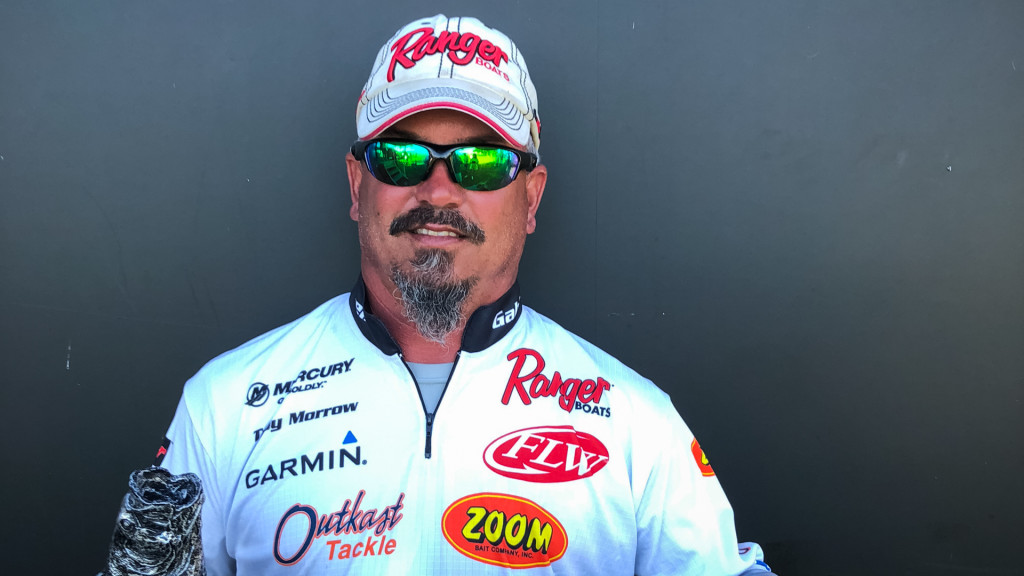 FLW pro Troy Morrow wasn’t planning on fishing the Tour in 2019 if he didn’t win the T-H Marine FLW Bass Fishing League (BFL) Regional on the St. Johns River. After what he called a “horrible” year on Tour in 2018, he simply didn’t think he had the money to pay entry fees next season.

Thankfully for Morrow, that’s no longer an issue.

The eight-year FLW Tour pro stacked three incredible days on the water to take home the top prize of $65,000, thanks in large part to bags of 21-5 on day one and 20-14 on day two. His day-three total wasn’t nearly as large by comparison (15-7), but it was good enough to be the largest bag of the day and more than enough for a 6-plus-pound margin of victory. Morrow’s three-day total was 57-10.

It wasn’t all fun for Morrow, though. He missed the first day of practice because of his travel schedule, and boat issues prevented Morrow from getting out on the water for practice until midday Sunday. But it was day-three issues on the return trip that really gave Morrow more anxiety than he had expected.

“We had some drama on the return trip,” he says. “We left just enough time to fish one of my key docks where I caught the big one the previous day. We got across Lake George and lost an ear on the prop. I thought it was going to be a lower unit issue.”

If it had been a lower unit issue, stopping at any point would have been out of the question, so Morrow kept it on plane at 53 mph on the entire return trip. He and his co-angler got back near the put-in with about 20 minutes to spare, and yet again, anxiety trumped elation when winning co-angler Randy Paquette (from the back of Morrow’s boat) caught a kicker on the final dock they fished.

“I got hung and broke off,” Morrow explains. “I got up there and got hung again, and my co-angler fired up and caught his winning fish. I thought that was the nail in my coffin right there.”

At the time, Morrow thought he only had 12 or 13 pounds and didn’t think that would be enough to win the tournament. As it turned out, he had more than 15 pounds and more than enough to seal the victory.

Morrow got on one pattern from the start and never strayed far from it. Fishing in the river the whole time, Morrow used a Zoom Ol’ Monster worm in black grape color, Texas-rigged and pegged with a 1/4-ounce tungsten weight. He threw that setup on a 7-foot, 6-inch, heavy Duckett rod.

While Morrow did catch a few on a walking bait and a drop-shot, all of his big fish came on that Zoom worm, and his better bites came fishing docks.

Making minimal mistakes was the name of the game for the Georgia pro. While other top-five anglers lost some key fish, Morrow can only pinpoint a couple instances in which he lost a fish he hooked.

“I lost one on the final day about 2 or 2 1/2 that really was weighing heavy on me,” he admits. “On one of my key docks I broke one off right after I caught one about 5 1/2, and you had to wonder how big that one was. Other than that, I fished pretty good. I fished pretty clean in this one.” 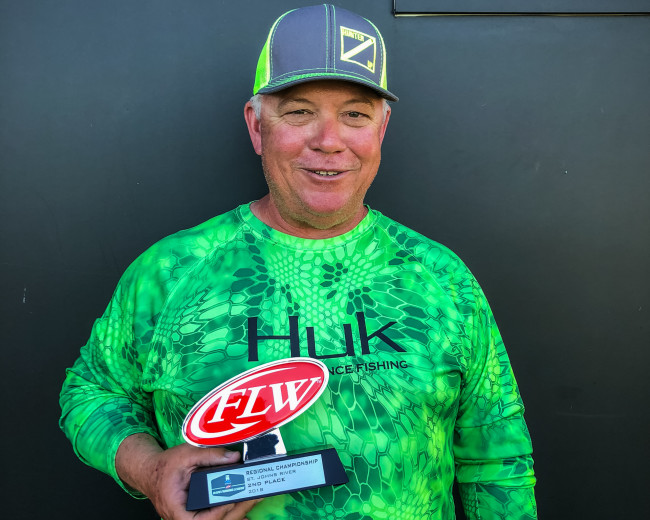 Florida’s Matt Kinney made his first BFL All-American with a second-place finish at the St. Johns River, and he did it by virtue of fishing his home lake, Crescent Lake, just south of the main river.

“I live on Crescent Lake,” says Kinney, who weighed in 51 pounds in three days. “It fell right into my lap.”

Home lake or not, Kinney still had to catch them. He filled a limit all three days of the derby (including a bag of 20 pounds, 7 ounces on day two) almost exclusively with a 7 1/2-inch black and blue Bass Assassin worm. He fished it extremely slowly and extremely methodically, flipping wood of all forms (laydowns, treetops, pilings and docks) in Crescent to bring in 51 pounds for the tournament.

“That’s fishing that lake,” he says. “That’s my style of fishing. I’ll pick it apart. Most of these fish I was catching, they weren’t feeding. I was making them bite.”

Kinney regularly made 20 or 25 casts in the same area, coercing fish to bite. When the worm wasn’t working, he switched to a Bomber Model 7A crankbait in Dance’s firetiger color. Unfortunately for Kinney, he lost some key fish on the crankbait as well.

“I lost probably three key fish,” he says. “I don’t know if it cost me the tournament, but I lost three key fish, and that was one of them on the firetiger 7A Bomber.” 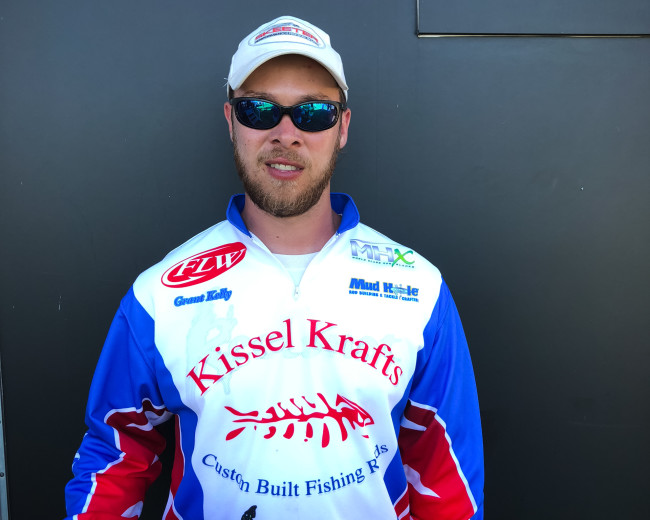 Kelly sticks to frogging the river

Grant Kelly notched a second-straight BFL All-American berth with his third-place finish at St. Johns with 49 pounds, 11 ounces, but he knows he narrowly missed out on a victory after not filling a limit on day three, thanks in large part to losing a bunch of key fish.

Kelly only turned in a three-fish bag for 7-11 on day three, but had he gotten those other fish in the boat, it would have been a much different ending for the Georgia angler.

Kelly stuck to the river the entirety of the derby after practicing there the Monday and Tuesday beforehand. He caught them so well in the river, in fact, that Kelly decided to end practice around 2 p.m. on Tuesday and didn’t even go out on the water Wednesday.

When he went back out Thursday for day one, he caught the second-largest bag of the tournament with 25-3, most of which came between 1 and 4 p.m.

Kelly leaned heavily on a SPRO Dean Rojas Bronzeye Poppin’ Frog in a bluegill-imitation color, which he rigged on a Kissel Krafts heavy-power, fast-action frog rod. Every fish he caught came on a rod from the Georgia rod company. He also caught a kicker of 6 pounds, 9 ounces on day two using a brown jig, which he switched to because of changing weather and tidal conditions.

Kelly credits his Reelsnot line lubricant for being able to so effectively fish a frog under overhanging trees and limbs along the banks of the river.

“The line really jumps off your reel, and it’s smooth so it skips better,” he says. “I was able to get my bait up into areas where they [other competitors] couldn’t.” 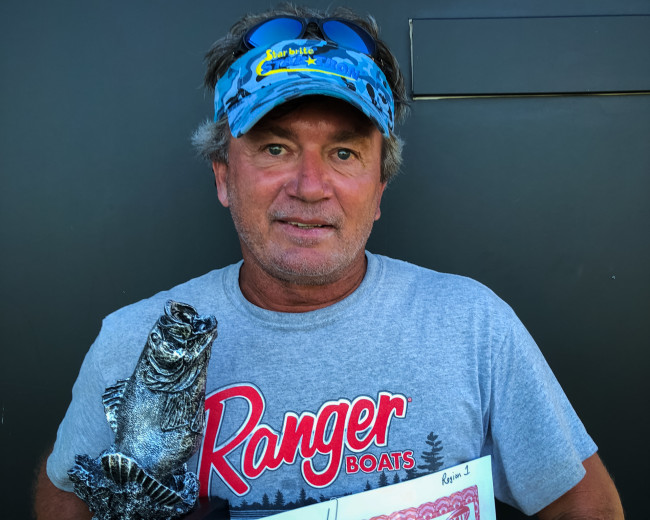 Sometimes the stars align and the fish you need just happens to be there.

That was the case for winning co-angler Randy Paquette, who landed a fish close to 6 pounds in the final 15 minutes of the tournament to pull ahead of second-place co-angler Gary Murphy. Paquette won by less than 4 pounds with 34-10 total.

“It was in the last 15 minutes,” he says. “We were really at our last dock we were going to fish before heading back.”

That kicker came on a Zoom Magnum Ultra Vibe Speed Worm in the red bug color, but almost all his other keepers came on a 5 1/2-inch Zoom Speed Worm in junebug. Paquette’s plan from the start was to Texas-rig the 5 1/2-inch worm on a small weight (pegged with a bobber stop), as that was the only bait he was catching them on in practice.

“I was throwing everything else, and I really didn’t throw it that much more in practice because I knew if nothing else I could catch fish with that worm,” he says. “I told the guy I was staying with that I thought I was going to throw one bait the whole tournament.”

That one bait worked everywhere Paquette went. He fished docks and pencil reeds nearly everywhere his boaters took him – Crescent Lake on day one, Lake George on day two and the river on the final day. And while the bites were few and far between on day three, he got the one he really needed.

“I was swinging for the fences at that point and got lucky,” he admits. “My boaters, they were all good guys. That’s what really helped. That and the Good Lord and some luck.”