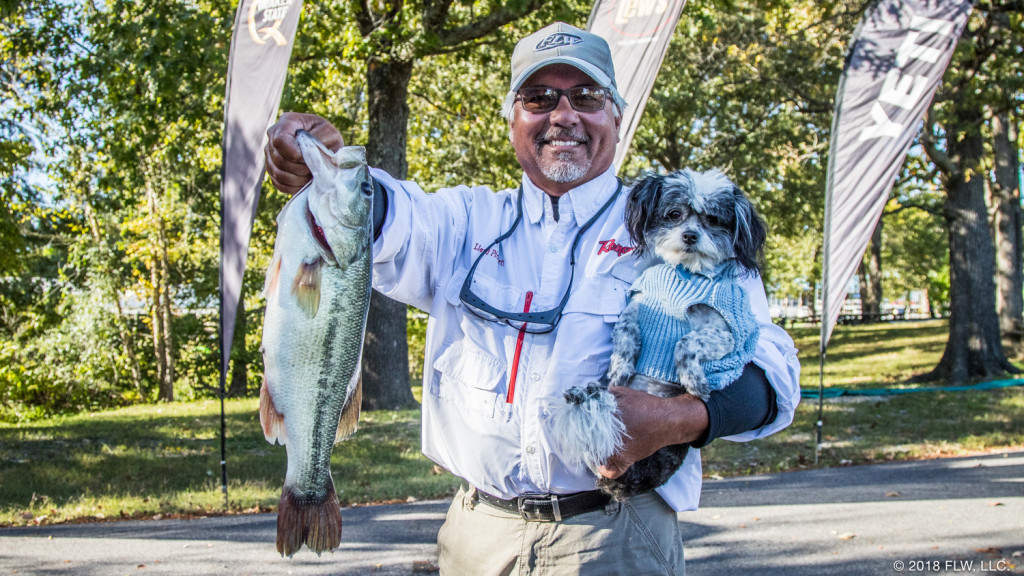 Fall is a notoriously tough time to fish Kentucky Lake, especially this season since there’s no grass in the fishery. Slinging topwaters around grass is a staple technique on the lake’s southern waters this time of year.

For Tennessee boater Lloyd Pickett Jr., the lack of grass actually worked in his favor at the T-H Marine FLW Bass Fishing League Regional presented by Evinrude this week. Pickett is widely regarded as an expert Carolina rigger. It’s basically his signature technique, and with no grass to deal with, the lake was wide open for him to drag his way to a Regional win and his seventh All-American qualification.

Pickett, a Tennessee River stick who fished the entire event with his pomapoo Blossom, spent a couple of practice days “disguised” from his competition by fishing in an aluminum boat. He quickly figured out what would become his winning pattern. Pickett targeted bass on main-lake gravel bars, secondary points and secondary pockets.

“If you found the shad, you got bit, but if you found the skipjack, you caught big ones,” says Pickett. “I fished some gravel bars out on the main lake, and when that wasn’t happening, I fished secondary points in the creeks.”

He located skipjack visually. They’d skitter across the surface when chased by predatory fish, or he’d spot big bass coming up to chase them on the surface.

The winning spots, all located around the Paris, Tenn., area, varied from about 1 to 7 feet deep.

“I had eight holes that had fish on them,” he says. “I only hit two the first day, three yesterday [Friday], and I hit two today. I only refished one spot each day, but I didn’t really catch much on it.”

The speed at which he fished allowed Pickett to get by with so few spots while many of his competitors fished dozens of places a day. Limiting his travel between spots was also part of a strategy to make the most of his competition time after making the long run south and dealing with high winds.

“When you run that far down there, you burn two hours [round trip], and when you Carolina rig as slow as I do, I can burn three hours just like that,” Pickett says.

He dragged his Carolina rig about as slow as possible and milked each spot for all it had, not changing locations until he was no longer seeing any bass or bait.

The Carolina rig was baited with a Zoom Brush Hog in green pumpkin, watermelon candy or blueberry (black with purple fleck) on a 4/0 Gamakatsu EWG hook. Occasionally he mixed in another creature bait. Pickett used a 3- to 5-foot-long leader of 12-pound-test Bass Pro Shops XPS Fluorocarbon connected to 15-pound-test XPS main line and added a couple of glass beads – for extra sound – between his swivel and either a 3/4- or 1-ounce weight. The Tennessean used a custom Muddy River Rods model 714.

Interestingly, this is the first season that Pickett has used fluorocarbon for his rig. Previously, he fished Trilene Big Game monofilament.

“Mono stretches too much, and I’m getting older,” he says. “My hookset isn’t what it used to be.”

Other than dragging painfully slow, the biggest key to Pickett’s presentation was to keep it natural.

“I like to get off the side of the point and throw over the end of the point,” he says. “If there’s current, I’ll pull with the current. If I’m fishing a secondary pocket with wind blowing in, I come around and pull with the wind the way the shad would be coming. On gravel bars, I just throw as far as I can.”

The entire system worked well enough to earn Pickett $20,000 and a new Ranger bass boat. He opened the tournament with 16 pounds, 14 ounces on a day where he landed 10 keepers and 14 shorts. Day two, he caught only three for 9-13. On the final day, the wind switched and started blowing out of the northwest, which muddied up Pickett’s remaining areas. He admits he should’ve probably changed to fish protected waters, but he stuck with it, weighed in two fish for 6-1 and held on to win by a margin of 2 pounds, 11 ounces with 32-12 total.

“The goal was to make the All-American. This makes No. 7 for me. I’ve been second and third a couple times in these Regionals, and it’s always a back breaker. So to win this, it feels real good.” 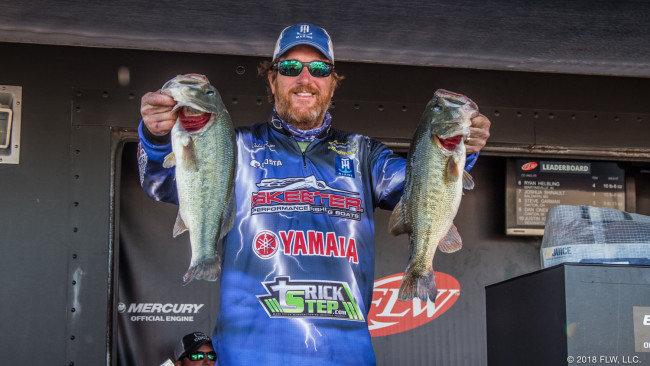 Despite conditions that really challenged him, Indiana boater John Devries more or less came within one fish of a Regional victory. The Indiana deli shop owner and renovation contractor deals with lingering effects of a near-frostbite incident that happened many years ago. As a result, whenever his hands get wet and cold, several of his fingers throb with pain. The situation plagued him throughout a chilly practice and during the tournament to the point that Devries almost called it and went home on more than one occasion. Thankfully, he gutted it out, because Devries caught 13-5, 6-2 and 10-10 to make his second consecutive All-American.

Each day, Devries put a fish or two – including a few good ones – in the boat early and then experienced long lulls. The lull never ended on day two, when he caught just two keepers. He got only seven keeper bites in three days and put every one in the boat.

“I threw walking [topwater] baits all day long,” Devries says. “It goes against all conventional wisdom. When it’s tough, bass fishermen like to try something different. But sometimes you’ve just got to put your head down and grind it out.”

Devries fished new water every day. He says be burned about $150 per day running down south and blitzing through areas on both the main lake and in creeks.

“I fished between here [Moors Resort] and New Johnsonville and fished anything that looked good to fish with a topwater bait,” he says. “And I stopped on it all … twice.” 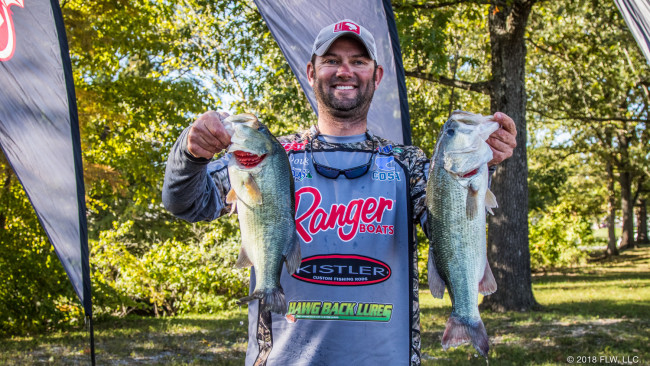 Doug Ruster, in third place, is one of four Indiana pros who finished in the top five. The Union electrician from New Palestine picked up where he left off in the 2017 Regional on Kentucky Lake, where he finished eighth by throwing topwater down south. It was more of the same this week with an Evergreen Shower Blows pencil popper and a River2Sea Whopper Plopper.

“I started fishing a bunch of shallow bars down south,” he says. “I was fishing the main lake.

Ruster worked 10 spots. The key was locating bars that were very flat on top where shad were present. The strategy produced nine keepers for 29 pounds, 1 ounce in three days. 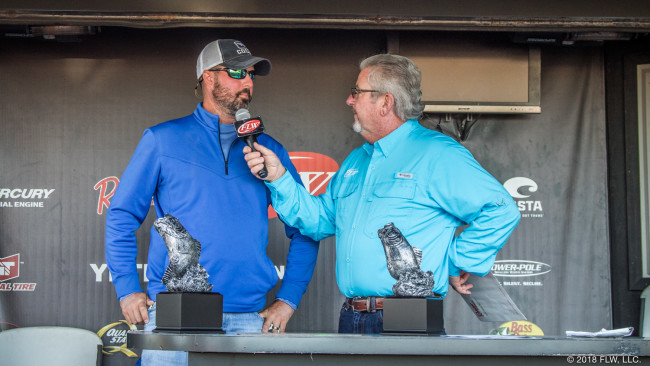 Brent Ladnier sold his boat this spring, setting in motion what turned out to be a highly productive season of “firsts.”

He fished his first BFL event and made his first Regional. This week, at the Regional, he got his first win to qualify for his first All-American.

“I didn’t have a boat, but I wasn’t going to sit around all summer,” says Ladnier about his decision to fish the BFL circuit this year. “A group of friends from home got in them, and I’m the only one who stuck it out all the way.”

Ladnier weighed in an impressive 20 pounds, 12 ounces on day one to jump in front among co-anglers. He caught only one keeper on day two, and lost the only three fish that bit on day three, but still easily took home top honors at the Regional.

“I never in my mind could’ve thought I’d come up here and catch 20 pounds in a day and catch one little dink to seal it,” he adds.

Ladnier, a beer salesman for Budweiser in southern Mississippi, caught his winning fish by throwing topwater on shallow flats. He says he’s considering competing as a boater next season if he can get the time off work.