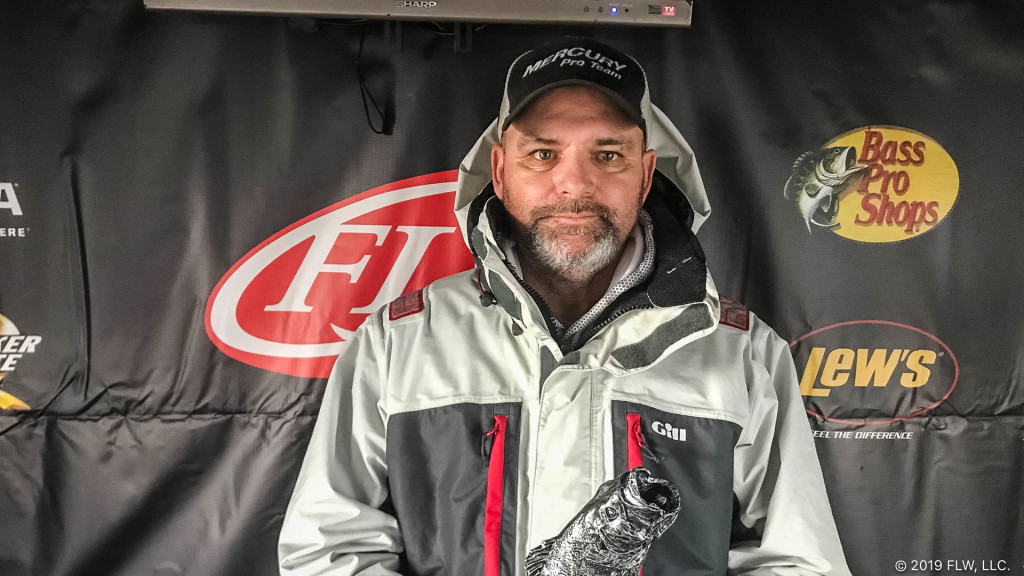 “I wasn’t catching a lot of fish, but they were the right ones. I probably hit 25 to 30 areas – just chasing the wind,” says Choate, who earned his first win in FLW competition. “I’m glad it was windy out there. When it picked up in practice, I was really catching them. I practiced all winter for almost two months and figured if I could get five bites, I’d have a good chance to win.”

Choate used a ¾-ounce chartreuse and white-colored Hoppy Tandem Emerald spinnerbait with a 4-inch white/shad-colored Todd Ruth Ultimate Swimbait trailer, as well as a scarlet-colored Duo Realis M62 5A crankbait for his lone smallmouth. His pulled in his fish with a 7-foot, 3-inch Duckett White Ice II Series rod and a Lew’s Team Pro reel.

“I was slow rolling [the spinnerbait], letting it bounce on the rocks or stumps – whatever I was fishing,” says Choate. “I threw the ¾-ounce was because of the wind. I was fishing shallow, but I needed to keep it down.”

Choate finished by extending a “thank you” to C&O Marine in White Bluff, Tennessee, for letting him borrow a boat to use while his new Nitro Z21 was being rigged up and readied for competition.

Tony Eckler of Lebanon, Tennessee, caught a 6-pound, 3-ounce bass – the heaviest of the event in the Boater Division – and earned the day’s Boater Big Bass award of $370.

Gibbs caught the largest bass in the Co-angler Division, a fish weighing in at 6 pounds, 3 ounces. The catch earned him the day’s Co-angler Big Bass award of $185.