All-American Off and Rolling on Douglas 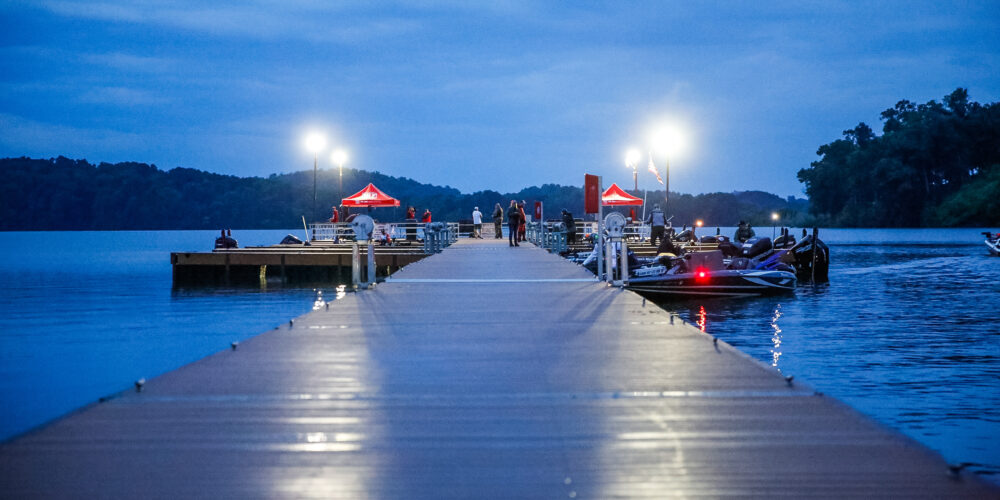 Day 1 of the 2021 Phoenix Bass Fishing League Presented by T-H Marine All-American Presented by TINCUP is shaping up to be much like the final day of official practice yesterday – cloudy, wet and featuring plenty of uncertainty.

Anglers in the 49-boat All-American field got a taste of what Douglas Lake is like on a warm, sunny day for the first day of official practice on Monday. Unfortunately (or maybe fortunately for those hoping the rainy conditions help their patterns), it doesn’t look like there’ll be too much sunshine in the forecast today as 98 of the best grassroots anglers in the country set out in search of the right bass to secure the top $120,000 prize (including a $20,000 Phoenix contingency bonus) for the winning boater and $50,000 for the winning Strike King co-angler.

The All-American and all its prestige is the pinnacle of the fishing experience for weekend warriors. The way Douglas seems to be fishing right now, every angler who made the tournament is going to have to earn their way to the top spot.

A 30,400-acre impoundment of the French Broad River, Douglas Lake extends about 43 miles upstream from the Douglas Dam, which was built quickly in 1942 and 1943 by the Tennessee Valley Authority for the purposes of flood prevention and energy production.

Douglas’ main feeder rivers are the Nolichucky and Pigeon rivers with a handful of other notable feeder tributaries throughout the upper portion of the lake. At maximum flood storage capacity, Douglas is capable of holding 1,082,000 acre-feet with a normal full pool level of 990. Currently, Douglas is about 4.67 feet above full pool, though the lake levels haven’t fluctuated too rapidly since early April – just a steady decrease to account for the massive rains and flooding earlier in the spring.

A deep (maximum depth of 140 feet) mountain lake, Douglas is as picturesque as can be, nestled in the heart of the Appalachian Mountains at the foothills of the Smokies, not far from Gatlinburg and Pigeon Forge.

The lower end of the lake features the cleanest, deepest water, while the upper end offers plenty of stain and some riverine water that features plenty of shallow-water fishing, including ample brush. You won’t find much vegetation in Douglas, but there are plenty of offshore ledges to target as well as brush, rock, laydowns and docks.

Apart from the rain, several factors will be at play throughout the week including water levels, clarity and fishing pressure. Just a few days removed from a Memorial Day that saw countless boats packed from Douglas Dam to the river, how well the offshore fish have recovered from that pressure might be the biggest wildcard of the week.

Even if those offshore fish are a little more comfortable now and set up to be caught, Douglas simply hasn’t been fishing as well this year as many are accustomed to, at least according to Vonore, Tennessee’s Brent Butler, who lives little more than an hour away and has plenty of experience on Douglas.

“I think [the leaderboard will] be really tight because the numbers of 4- and 5-pounders are hard to come by here anymore,” he posits. “It used to be phenomenal offshore but that’s not been the case lately.”

Weights from local tournaments support that hypothesis, with 18 or so pounds typically being more than enough to secure a win.

Of course, Douglas offers a lot more than just a quality offshore bite. Because of the springtime deluge that flooded Douglas back in March and April, the spawn seems to have been pushed back a bit as the water levels receded back to normal. So, while doing well on Douglas in June is often predicated on doing well offshore, that might not be the case this week.

“There’s plenty of fish shallow, but I only saw one of the right kind out of about 15 bites,” says Lebanon, Tennessee’s Drew Boggs of his Monday practice. “The only real optimism I have is that they’re not all out [offshore]. I saw bluegill spawning, the carp spawning, the bass up sunning. [Monday], the water temperature was 69 and got up to 76. It’s perfect for shallow fish.”

That’s probably good news for many anglers considering how crowded the most popular offshore spots are going to be. According to Cade Laufenberg of La Crosse, Wisconsin, who qualified through the BFL Regional at the Mississippi River, there aren’t many offshore schools that haven’t been found by multiple competitors.

“The biggest thing here is it seems like the offshore parts of the lake are fishing kind of small,” he says. “There’s some big schools that are out there, but it seems like all the large schools of fish have been located. It’s really going to be a matter of timing, pulling up on a big school at the right time when nobody’s on it and getting them to fire up, because there’s no secret schools I don’t think.”

Butler agrees, and that’s why he plans on doing a little bit of everything this week.

“There are obviously still fish on the community holes, but by this point, they’ve been fished really hard and they’re really finicky,” he says. “I’m doing both (shallow and deep) because with this group of anglers you better have all kinds of plans. Even though there’s only 49 boats, you better have everything you can bring.”

When you think of Douglas in the summer, you think offshore with the typical offerings: crankbaits, swimbaits, worms and jigs and spoons. Those baits will all play this week, especially with anglers being allowed to long-line, which typically isn’t allowed on local tournaments on Douglas.

While there are probably more than a dozen well-known community holes and another couple dozen offshore spots many people know about, Laufenberg has been toying around with some alternative patterns and methods for catching fish offshore.

“What [this tournament] really reminds me of is last year I fished the Illini Division and it reminds me of Shelbyville,” he says. “It’s a lake with a lot of creeks and a lot of points and a lot of those points are just bare. When I fished there, the lake was really high and the fish were sitting on the edge of those points in 30 foot of water. That’s kind of how it is here. They want to be on those points, and they don’t care what the water level is. It doesn’t matter if there’s 10 feet or 100 feet over their heads.”

Laufenberg says he practiced with a Neko-rigged Strike King Shim E Stick just to see what he could get to bite, but he also caught them pretty good on a Strike King 6XD crankbait at one point on Monday, which he says gave him a ton of confidence in fishing a crankbait during this tournament.

Butler, who’s pretty dialed on what Douglas’ offshore fish want and don’t want, says he’s been working on something a little “out of the box” specifically for this tournament, though he’s remaining tight-lipped for now about what that technique involves.

“I tried it yesterday on a school that I know had been hammered on at a community hole and caught a 3 1/4, and so I know that there’s a good very chance that nobody is doing what I’m doing with this technique,” he says. “How will the rain and stuff affect it? I don’t know because I thought of it just for this tournament and it was sunny [Monday].

“It’s so hard to think of new things that they have not seen. Let’s just say it does involve a West Coast bait.”

As for the shallow bite, Boggs says he hasn’t seen any evidence of a shad spawn, though he believes there might be a bluegill spawn starting. With some of Douglas Lake’s largemouth population still up shallow following their own spawn, there are plenty of opportunities to catch them that way, too.

“I did get some bites (Monday) on a swimbait, so I know that could be a player, but I’m hoping the buzzbait, popper and frog action could come into play.”

That could be especially true with the rainy, overcast conditions on Day 1.

Douglas is a terrific lake. Douglas is in a bit of a down period. Both can be true.

That middle ground is probably going to be apparent at the weigh-in stage this week, as weight estimates from several anglers are all in the same ballpark.

“I feel like to make the Top 10 probably like 28 pounds would have a good shot,” Laufenberg adds. “It’s hard to say. I haven’t talked to a whole lot of people, but 14 pounds two days in a row would be pretty strong.”