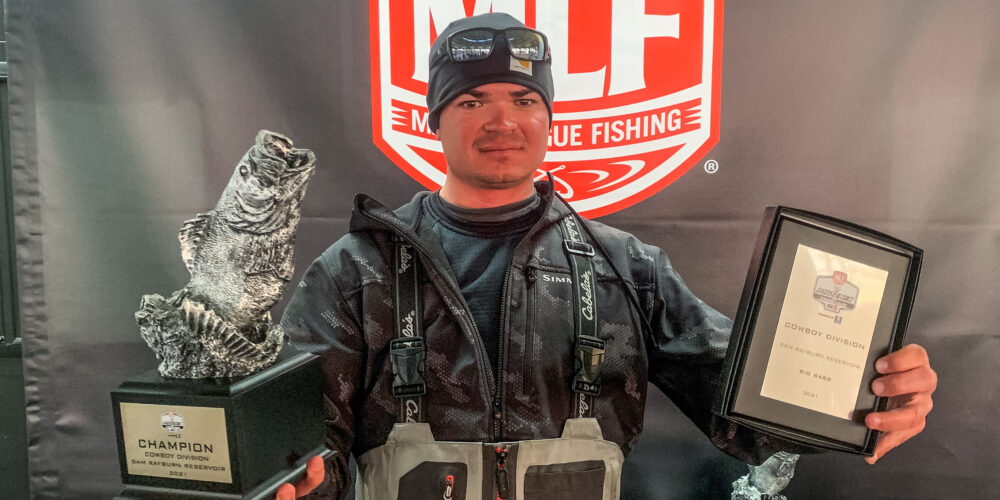 Weighing 40 pounds, 10 ounces to win the first Phoenix Bass Fishing League Cowboy Division event of the year, Derek Mundy started the 2021 season with a bang. An 11-10 kicker helped him, but when you’re over the 40-pound mark, there’s no small fish involved. Beating out a full field, Mundy earned $7,000 and Big Fish honors to boot.

Mundy’s bag edged out Anthony Sharp’s for the fourth-largest five-fish limit in MLF history and fell 1 ounce shy of tying Casey Martin for the third-largest bag of all-time. Last February, Sharp walloped 40-6 in a Cowboy Division event on Sam Rayburn in February, so this is the second time in under a year that Rayburn has kicked out a 40-pound bag.

If you want to get in on the action, the Toyota Series Southwestern Division kicks off on Rayburn at the end of January.

Mundy, who hails from Broaddus, Texas, found his fish in practice, but he didn’t know how good it was going to be.

When Mundy rolled up to his first spot, he proceeded to do just that.

“I caught four of them on a big crankbait, the first four, and they kinda got busted up,” Mundy said. “Then I pulled out a jig and caught the last one. Just five, all on the first stop, in about 20 minutes.”

Fishing a Strike King 8XD and a ¾-ounce V&M The Flatline Pacemaker Football Jig, Mundy did all his damage on one spot in about 17 feet of water in the mid-lake region. After catching five giants, Mundy relaxed.

“I kinda took it easy, I went to some Plan B stuff to try to get my co-angler on fish, but it never worked out, that wind got up pretty bad in the afternoon,” he admitted.

Weighing his fish as soon as he was allowed, all Mundy had to do after that was wait to collect his check.

“It’s the biggest bag I’ve ever caught,” said Mundy, who makes his living working on oil pipelines. “It felt good, I didn’t realize they were that big until got to checking on them and making sure they were doing alright in the livewell, but I still didn’t know I had 40 pounds.”