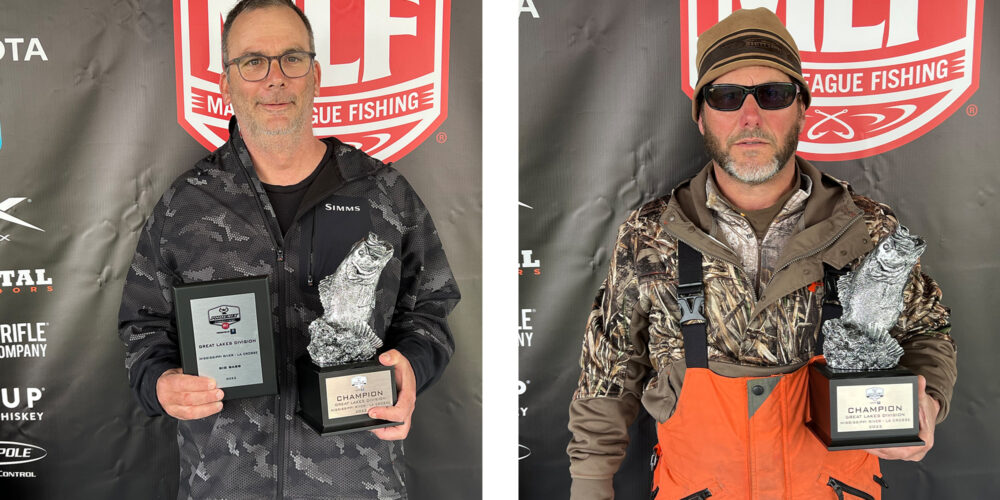 “The wind really helped me out a lot,” Zumach said. “It actually set me up against the current with the current coming down and the wind coming up, so it kept me in one spot. Once I figured out the fish had moved to shell beds, that wind did nothing but help me.”

Zumach said he fished a shad-colored Strike King KVD Jerkbait and a lipless crankbait in eight feet of water to target the shell-bed bass.

Zumach is a veteran Phoenix Bass Fishing League tournament angler, with a total of 111 MLF events fished since the mid-1990s. Zumach said he caught only seven fish during the course of the tournament – all keepers – but those fish resulted in the right five weigh-in fish on the right day.

“This feels amazing to finally pull off a win,” Zumach said. “I’ve been close and fishing these for a long time, and I finally got the win.

Skaer caught the largest bass in the Co-angler Division, a fish weighing in at 4 pounds, 12 ounces. The catch earned him the day’s Berkley Big Bass Co-angler award of $302.

The 2022 Phoenix Bass Fishing League Presented by T-H Marine is a 24-division circuit devoted to weekend anglers, with 128 tournaments throughout the season, five qualifying events in each division. The Top 45 boaters and Strike King co-anglers from each division, along with the five winners of the qualifying events, will advance to one of six Regional Championships where they are competing to finish in the top six, which then qualifies them for one of the longest-running championships in all of competitive bass fishing – the Phoenix Bass Fishing League All-American. The 2022 All-American will be held June 2-4 at Lake Hamilton in Hot Springs, Arkansas and is hosted by the Arkansas Department of Parks and Tourism and Visit Hot Springs.