Top 10 Baits from the All-American on Lake Hamilton 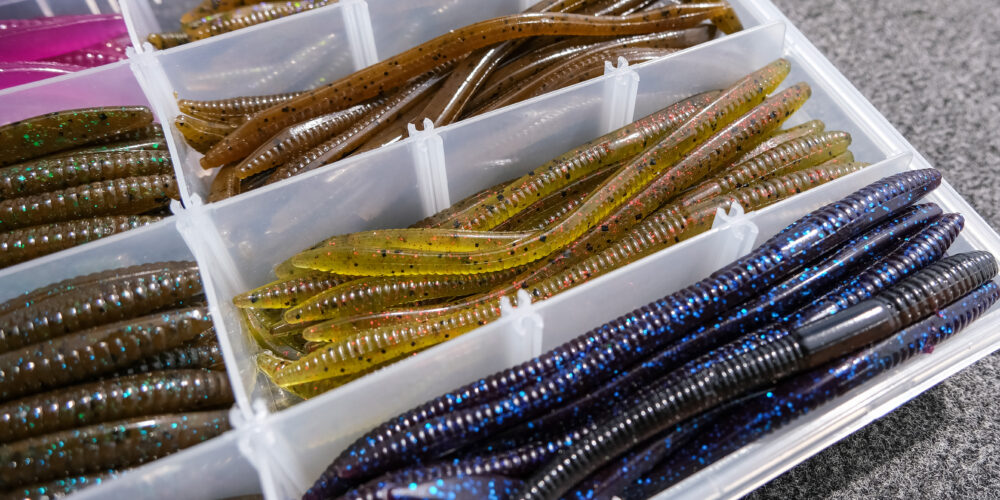 HOT SPRINGS, Ark. – There were essentially two different ways to attack Lake Hamilton for the 39th annual Phoenix Bass Fishing League Presented by T-H Marine All-American—you could go shallow to find late spawners or hang out deep scouring offshore brush piles or chasing schoolers. The Top 10 boaters really mixed what they were doing to catch them, all with different baits to do so.

1. Connor Cunningham spent his week up shallow on Hamilton throwing a River2Sea Whopper Plopper 110 in bone color. He said that he figured out the bass were biting a topwater during practice and decided that’s what he was going to start with on Day 1. After catching 17 pounds, 8 ounces on Thursday, the Missouri angler knew he was on the right stuff. Cunningham also utilized a football jig and a Strike King 6XD when he was trying to help his co-anglers catch a few out deep.

2. Hunter Eubanks finished in second and was unable to threaten Cunningham on the final day. Still, Eubanks filled his limit every day on Lake Hamilton, mainly with a Buckeye Lures Spot Remover Pro Model shaky head paired with a Zoom Trick Worm. Eubanks said that the way the Spot Remover head allowed the Trick Worm to stay up was probably one of the main reasons that combo worked so well. The South Carolina angler also tied on a Yamamoto Senko on a Carolina rig when he needed to switch it up.

3. Sean Wieda had no plans of sight fishing on Lake Hamilton—one of his favorite ways to catch them. But when he showed up to Hot Springs and saw bedding fish, he immediately turned to a Gan Craft Jointed Claw Glide Bait to get them fired up. After that, he hit them with a 4-inch Yamamoto Senko on a drop-shot or a Zoom Ultra Vibe Speed Craw to get them in the boat. When cloud cover rolled in on Thursday, the Kentucky boater started blind-casting a weightless 5-inch Yamamoto Senko in mowed grass color to catch deeper spawners that he couldn’t see.

4. The local hammer, Brian Bean, came away with a fourth-place finish on his home lake. Bean used a 12-inch Berkley PowerBait Power Worm in plum apple color on Day 1 and 2 to catch offshore schoolers and fish in brush piles. That bait kept him in contention, but that deeper bite wasn’t doing it for him on Day 3. Bean made the decision to move up shallow and throw a buzzbait with a Berkley PowerBait Buzz’n Speed Toad to catch his better-quality fish on Saturday.

5. Andy Wicker filled his limit each day with a variety of baits, mainly with a 9/16-ounce True South Custom Lures jig with a Berkley PowerBait Meaty Chunk or a Zoom Z Craw. When that wasn’t what the fish were wanting up shallow, Wicker moved to a Texas-rigged Zoom Speed Worm to generate more bites. Out in deeper water, it was a Berkley Dredger crankbait that helped him fill out his limit.

6. David Lowery spent all three of his competition days moving deeper and deeper in Mazarn Creek. He was mainly targeting his fish with a SPRO Bronzeye Poppin’ Frog in rain forest color. He also followed up his frog with an Accent Jacob Wheeler Custom Triple Willow Spinnerbait with a 3.5-inch Big Bites Baits Cane Thumper on the back. When he got around docks or other man-made cover, he was working a Z-Man ChatterBait paired with the same 3.5-inch Cane Thumper.

7. Mike Reid may have left Lake Hamilton with more questions than answers. He was able to fill his limit every day, but what he caught his fish on was never consistent. He started with a SPRO Little John Baby DD crankbait in citrus shad out deep, followed up with a Nichols Lures Lake Fork Flutter Spoon. When it came to fishing shallow, he pitched a homemade jig he made back in Texas.

8. Justin Kimmel, like many others, worked both shallow and deep water. On Day 1, he was mainly offshore with a Berkley Cane Walker, a Berkley Stunna and a spoon. Kimmel moved to shallow water on Day 2 with a Cane Walker and a new glide bait he helped design from Clutch Swimbaits called the Darter. Kimmel said that the Darter is made to trigger reaction bites up in the water column and moves faster than other glide baits. On Day 3, it was a combination of all of the baits he had used the first two days.

9. Ryan Powroznik kept it simple this week using a shaky head almost exclusively. He did switch up the worm he was using with the shaky head, though. He switched between a 6-inch Roboworm Straight Tail Worm and a Mud Puppy Custom Lures worm. Powroznik was excited to use the new Mud Puppy worm because it’s a company based back in his hometown of Prince George, Virginia.

10. Sticking shallow to finish up 10th, Johnathan Crossland was able to catch a few fish on a SPRO Bronzeye Frog, but his main bait was a black Big Bite Baits Tour Toad on the back of a buzzbait.