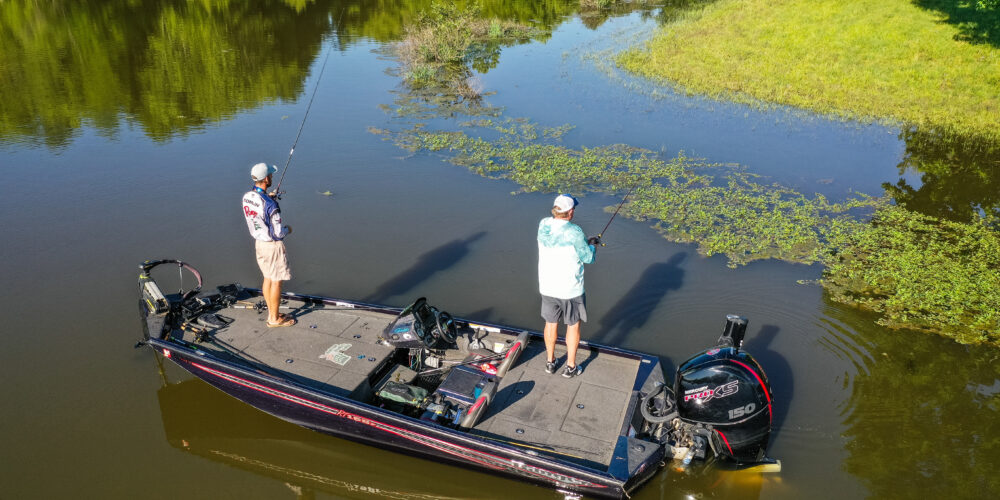 Anglers at the Phoenix Bass Fishing League Presented by T-H Marine All-American faced a Douglas Lake conundrum. With a championship on the line, anglers had to make a the decision to try and fish shallow, deep or both in the event presented by TINCUP.

Large, offshore schools of quality fish had potential to shock the scale, but triggering those big bites proved to be tougher than expected. Competitors were forced to choose between the opportunity to catch a giant bag in five casts, or moving shallow to fill a limit and fish their strengths.

Champion Brant Grimm was one of the few able to fire up the offshore schools, and it paid off to the tune of $100,000. Making ultra-long casts with his custom-made crankbait rod, he was able to bag 46 pounds, 9 ounces, and a first-place finish.

Here’s how the rest of the field stacked up behind him.

2. Brandenburg Lives by the Glide

Leslie Brandenburg glided into second place on the back of his River2Sea S-Waver 168 glide bait. Knowing this strategy would be high risk, high reward, he stuck to throwing it offshore for an impressive finish.

“I stuck to my guns on the glide bait,” says Brandenburg. “I danced with the girl who brought me.”

Known for bringing big fish in for a closer look, fishing a glide bait can be both fun and frustrating. Brandenburg was able to use it as a scouting tool that also helped his co-anglers.

“I told my partner the first day,” says Brandenburg, “Why are you throwing the same thing I’m throwing? These fish will eat a worm too if you throw it in there.”

With such a heavy bait, he relied on a stout Lew’s rod and reel combo spooled with 20-pound monofilament.

“I started using 16-pound mono,” says Brandenburg. “But I had a big fish the first day and I thought he was going to break my line. I went ahead and spooled up 20-pound after that; he pulled that hard.”

In the end, Brandenburg’s high-risk, high-reward strategy paid off in the amount of $20,000.

Finishing in third, Cody Hoyle was the top angler who went shallow on Douglas Lake.

“This lake has changed every day [of the tournament],” he says. “You’d think the sun would push them off the bank, but it actually made them get shallow.”

Targeting bass based on the baitfish they were chasing, Hoyle used swim jigs to search shallow cover.

“The swim jig was key because we had a little bit of a shad spawn going on,” says Hoyle. “Bluegill were up there too, I guess they were spawning.”

Hoyle leaned heavily on his 6th Sense Divine Swim Jig in white, but also used a homemade jig in green pumpkin to deliver a 1-2 punch.

“I’d throw a white jig if I saw a lot of shad, but if I saw bluegill up there I’d throw the green pumpkin.”

His Falcon Heavy Cover Jig rods were key for bringing bass out of the timber, and 20-pound-test Seaguar allowed him to bag one of the heaviest limits on the final day.

The only way fourth-place finisher Blake Tomlin could have went any shallower would have required casting on the bank.

“I was as shallow as I could get all week,” says Tomlin. “I spent my entire final day in 5 feet of water or less. I could see the bottom everywhere. Ninty percent of the fish I caught on a Senko, I watched them eat it.”

A YUM Dinger, wacky rigged, was his bait of choice on the Day 3.

“I pretty much caught every fish on the final day on a green pumpkin Dinger around docks I could where I could see the bottom,” says Tomlin.

The rest of the week he relied on a SPRO Bronzeye Poppin’ Frog to replicate spawning bluegill and emerging cicadas.

“I threw a color called killer gill most of the time,” says Tomlin. “I actually lost one of them on Day 2, and my buddy gave me one for the final day. I ended up catching a key fish on it.”

Tomlin’s All Star spinning rod and 13 Fishing Creed GT reel was his combo of choice for the wacky rig, while he relied on a Denali rod and Abu Garcia Revo Toro Beast, which has lived up to its name, while throwing the frog.

“I’ve had that thing for like five years (the Revo Beast),” says Tomlin. “I’ve caught a lot of frog fish on it and it’s still kicking.”

Coming in just a few ounces behind Tomlin, Chris Baldwin was also able to string together a shallow-water pattern as well.

“It wasn’t a shad spawn,” says Baldwin. “But I think it was more of a reaction bite with that white 3/8-ounce swim jig. Bass were actually eating the cicadas, but they were eating brim too.”

He found the most success on Day 1, with overcast conditions and intermittent rain.

“Thursday, when it was really cloudy, I caught 30 fish or more,” says Baldwin. “I don’t know, I lost count. I actually quit fishing about 12 o’clock to get my co-angler a limit.”

He did most of his damage on one small portion of Douglas shoreline.

“One stretch of little red bank is why (he made the Top 10),” says Baldwin. “Bugs were on it and the bass were chomping.”

While the white jig was his top performer, Baldwin did feel that the fish were getting wise to him by Day 3.

“I did learn that it pays to switch it up a little bit when fishing the same place. I changed to a green pumpkin jig with a watermelon candy trailer when the sun was higher,” says Baldwin. “The fish are a little smarter than we give them credit for sometimes.”

6. Nelson Checks a Bit of Everything

Chris Nelson was one of the few anglers to truly split his time between deeper water and patrolling the shallows.

“I just rotated. I’d go out deep, go shallow for a little while, then go back deep. I did that every day,” says Nelson. “I found my success to be about 50-50 between shallow water and fishing offshore.”

The changing conditions played a part in his approach, getting more bites on his De-Railer Baits vibrating jig with the overcast conditions on Day 1.

“I caught a lot more fish on Thursday shallow when the cloud cover was there,” he says. “When the sun came out it was a lot tougher.”

The time of day also came into play, with Nelson’s approach coming in a bit contrary to the standard procedure on other lakes.

“The plan was to go offshore early, then to go shallow, then to head back offshore,” says Nelson.

To trigger the offshore bites he relied on a 4.5-inch True Bass Hollow Body Swimbait on a ¾-ounce head. Splitting his time allowed him to bag almost 40 pounds over three days, and pad his bank account with $12,000.

Using a white swim jig and topwater plugs, Fitzpatrick was able to bag early limits of schooling fish. This allowed him to go searching for a bigger bite later in the afternoons. That’s when he made a key adjustment.

“I had the fluke on a drop-shot. I looked up on the bank and saw a big one swimming, I mean a big one,” says Fitzpatrick. “I threw a worm up on him and watched him nose down on it and didn’t eat it. I took that fluke, bit off the drop-shot weight, flipped it in there and caught my best fish.”

He rigged up the “fluke”, which is actually a Pulse Fish Plastics soft jerkbait weightless on a small drop-shot hook.

“It would almost sit right on top; you could watch them eat it,” says Fitzpatrick. “If I could see them before they saw me, I could catch ‘em.”

He wasn’t the only angler attributing his success to the bluegill spawn and hatching bugs.

Roger wasn’t the only Fitzpatrick competing on Championship Saturday. In what could only be described as a minor miracle, his son Chase also came into the final day in fifth place on the co-angler side–automatically pairing him with Roger.

“Fishing with my son on the final day was tremendously special; I just wish I could’ve got him some more,” says Fitzpatrick. “We went for broke, no regrets.”

Fortunately, neither went home empty-handed. Roger finished in seventh, while Chase took home $4,000 and sixth place as a Strike King Co-Angler – not to mention a memorable day on the water.

Working overhanging limbs and flooded timber near the shoreline, Harmon Davis was able to target fish feeding on bluegill in a unique way.

Using a Lucky Craft Kelly J Prop Bait, he was able to trigger even the most finicky of fish.

“It’s just a little perch, and I don’t think these fish have ever seen it before,” says Davis. “When they hit that thing those fish are so mad.”

After repairing his favorite lure on Day 2, he watched it swim away on Championship Saturday.

“I broke the blades on my bait on Friday. I stole the blades off another model, and replaced them. [Saturday] I caught two or three good fish on it, then had my line break at the boat on a 10-inch fish,” says Davis. “I watched him swim off with my bait still in his mouth, and almost went in after him.”

Davis also utilized a swim jig to catch a few of his biggest fish, targeting the same bluegill spawn. The efficient combo bagged him almost 39 pounds and an eighth-place finish.

Local favorite Dale Pelfrey stayed dialed-in on offshore schools, with no shortness of action. He found he simply lacked the large fish to climb the leaderboard.

“I stayed offshore all week. I had 50 schools located,” says Pelfrey. “I started out catching 10 limits on Day 1, I just don’t know what’s going on with the big bite right now. I just couldn’t get the quality.”

“I was just running as many holes as I could,” says Pelfrey. “There were some massive schools out there.”

For 10th-place finisher Austin Culbertson, it was all about bagging a limit before looking for larger fish. To begin each day he focused on schooling fish around marinas for a quick bite.

“With those schools it was all about getting them to fire up and trigger on something,” says Culbertson. “I’d throw a spook over the school, reel it in almost as fast as I could, then kill it and work it. I could call my shot every time.”

While those fish didn’t make a big impact on his final weight, they were a key piece to the puzzle.

“I ended up culling most of my topwater fish, but that bite was pivotal and allowed me to calm down the rest of the day,” says Culbertson. “I left both mornings of Day 1 and Day 2 with over 10 pounds, and I was able to look to upgrade after that.”

After noticing large fish feeding on the cicadas, Culbertson did his best to duplicate the pattern with what he had on hand – a LIVETARGET Hollow Body Frog.

“My frog is a smaller version,” he says. “It’s about the same size as the cicadas. I painted the bottom with a magic marker. It’s white with yellow, and I painted some black stripes on the bottom.”

It quickly became apparent that his fake was on par with Mother Nature.

“I could fire it up there and just let it sit. It looks so realistic they’d come up and just slurp it down,” says Culbertson. “Matching that hatch is really what it’s all about.”