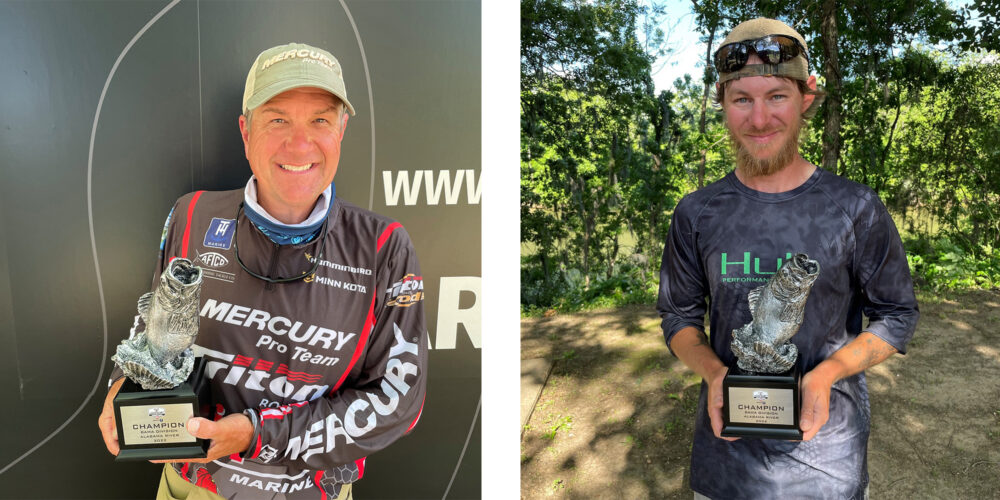 PRATTVILLE, Ala. – Boater Chris Rutland of Wetumpka, Alabama, caught five bass Saturday weighing 17 pounds even to win the MLF Phoenix Bass Fishing League Presented by T-H Marine on the Alabama River. The tournament was the third event for the Bass Fishing League Bama Division. Rutland earned $4,825 for his victory.

“I caught nothing at the first three or four stops that I made,” Rutland said. “Finally I caught a little fish mid-morning, then another little one, and then just totally abandoned my game plan.

“I owe my co-angler a lot of credit for the change,” Rutland added. “I was fishing pretty quick-moving baits, and he was dragging, and he had a limit before I had even caught a fish.”

Rutland said he changed to a Big Bite Baits Fighting Frog and caught “seven or eight” fish – including a 6-pound Berkley Big Bass and two that weighed 3½ pounds – from 11:30 to 12:30. Rutland said he pitched the frog, paired with a 3/8-ounce weight, into wood that was in shade.

“Those bass were very aggressive with the frog,” Rutland said. “You threw in there and picked it up, and they’d be leaving with it. They were either there immediately or not at all.”

Rutland said he considers the Alabama River and nearby Lake Jordan his home waters.

“I’ve been fishing the Alabama River for years, and I’ve had a lot of success here over the years,” Rutland said. “So it feels really good to win this tournament here.”

Rutland’s largemouth that weighed 6 pounds even was the heaviest of the event in the Boater Division and also earned him the day’s Berkley Big Bass Boater award of $590.

Davis caught the largest bass in the co-angler Division, a fish weighing in at 5 pounds, 6 ounces. The catch earned him the day’s Berkley Big Bass co-angler award of $295.