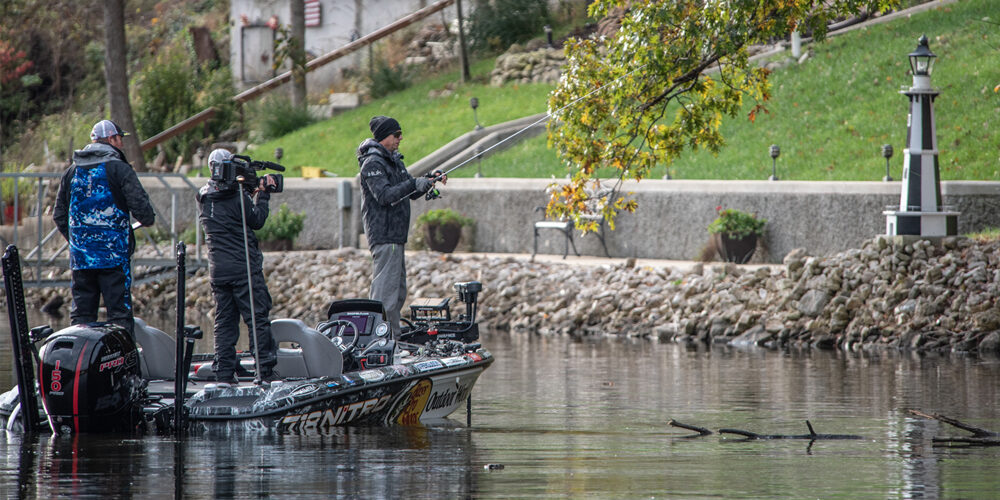 Brent Ehrler mixed it up with a Senko and jerkbaits in winning the third Elimination Round of the 2020 Summit Cup. Photo by Garrick Dixon
June 1, 2020 • Mason Prince • Cup Events

Ten anglers competed for three periods on Lake of the Ozarks in central Missouri, but only the Top 6—Brent Ehrler, Bobby Lane, Edwin Evers, Jacob Wheeler, Jordan Lee and Casey Ashley—secured their spot next to the 12 other qualifying anglers in the Sudden Death Rounds.

For the entirety of Elimination Round 3, the Top 3 anglers on SCORETRACKER® remained steady. Brent Ehrler took home first place by catching 23 bass for 33 pounds, 11 ounces, just 1-15 ahead of Bobby Lane and 3-5 ahead of Edwin Evers.

Ehrler found his winning strategy in Period 2, catching 12 bass for 15-14 with a combination of shallow and deep jerkbaits along with a Neko-rigged Yamamoto Senko around boat docks.

“The wind started picking up and the fish really started snapping around docks in Period 2,” Ehrler said. “I had a lot of fish that would chase the bait but wouldn’t bite it. It seemed like you really had to be right on the docks to really get that bite.”

The key in the first two Elimination Rounds was the bite in the backs of the creeks in the Gravois Creek area. However, the California pro quickly readjusted when he saw schools of shad jumping behind his boat when he was near the docks.

“I thought when I was around too much bait I wouldn’t get the bites,” Ehrler explained. “Every other cast, I had to pull a shad off my bait because it would get snagged. I think the colder it gets, the more these fish are going to flush into the backs of these creeks.”

Ehrler and Evers have already qualified for the 2020 General Tire World Championship, but former World Champion Bobby Lane needs to finish inside the Top 3 during the Championship Round of the Summit Cup to qualify for the event.

As always, there was drama near the Elimination Line as time began to expire. With less than 30 minutes remaining, Dustin Connell jumped ahead of Casey Ashley for the final spot in the Top 6 by 9 ounces.

As the clock began to tick closer to zero, Ashley needed just one scorable bass to pass Connell. With a spinnerbait tied on, Ashley hooked into a 2-pound largemouth with only two minutes remaining. That fish was the final nail in Connell’s Summit Cup coffin, sending Ashley onto the Sudden Death Rounds by a 1-7 margin.

“I can’t catch a break in these Cup events,” Connell said in disbelief following his elimination.

On the other side, Ashley qualified for his second Sudden Death Round of the season. The intensity and stress that comes with being so close to the Elimination Line is something that the South Carolina pro easily felt towards the end of the day.

“There’s nothing like Major League Fishing because this stuff is down to the wire every time,” Ashley said following his sixth-place finish. “You think you have a little cushion? Guess what, you better keep on stabbing because these boys are coming for you. We’re on to Sudden Death and I’m happy.”

Connell, Adrian Avena, Andy Morgan and Justin Lucas were the four anglers to fall below the Elimination Line on Lake of the Ozarks. All four won’t be competing in the General Tire World Championship.

The Wiley X Summit Cup Presented by B&W Trailer Hitches continues with Sudden Death Round 1 on Saturday, June 6 at 2 p.m. EST on Outdoor Channel. Nine anglers will race to be one of the first four pros to reach the Target Weight for the right to advance on to the Championship Round.