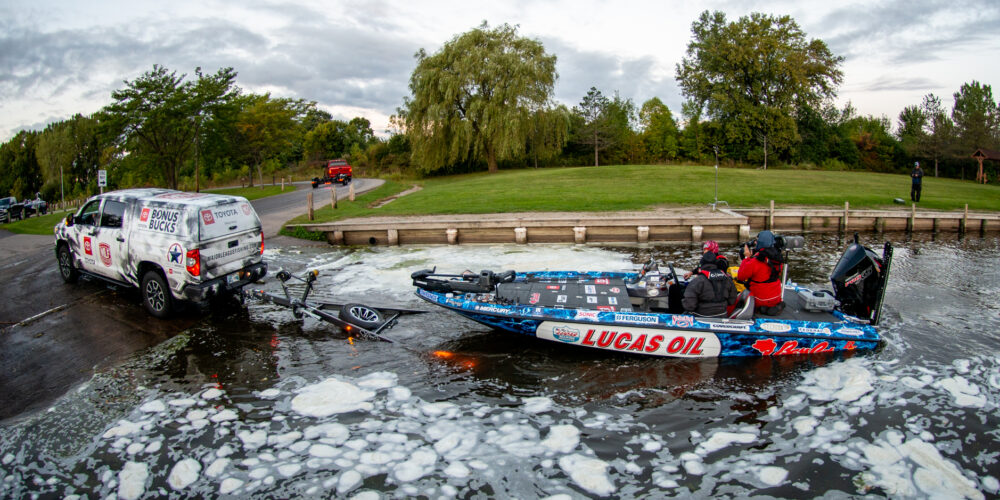 The 2021 Lucas Oil Challenge Cup Presented by B&W Trailer Hitches welcomes nine anglers to Sudden Death Round 2 with a trip to the Championship Round on the line. The nine anglers battling it out on Lake Butte des Morts are:

In Sudden Death Round 1, Takahiro Omori was the first angler to find 22 pounds of bass on Lake Butte des Morts. Omori used his Lucky Craft crankbait near boat docks and bridge pilings to find a mixture of smallmouth and largemouth bass. Joining Omori in the Championship Round will be Michael Neal, Edwin Evers and Andy Morgan. Alton Jones Jr., Ott DeFoe, Josh Bertrand, Jeff Sprague and Andy Montgomery were unable to crack the top four and will be heading home.

Be sure to click here for some of the best images our photographers captured during Sudden Death Round 1. Also, don’t forget to hear from the round winner, Takahiro Omori, in this Sqwincher Winner’s Press Conference where he breaks down how he was able to catch them on Lake Butte des Morts.

Sudden Death Round 2 will air on Outdoor Channel on Saturday, January 30 at 2 p.m. ET. The full television schedule can be found at MajorLeagueFishing.com.