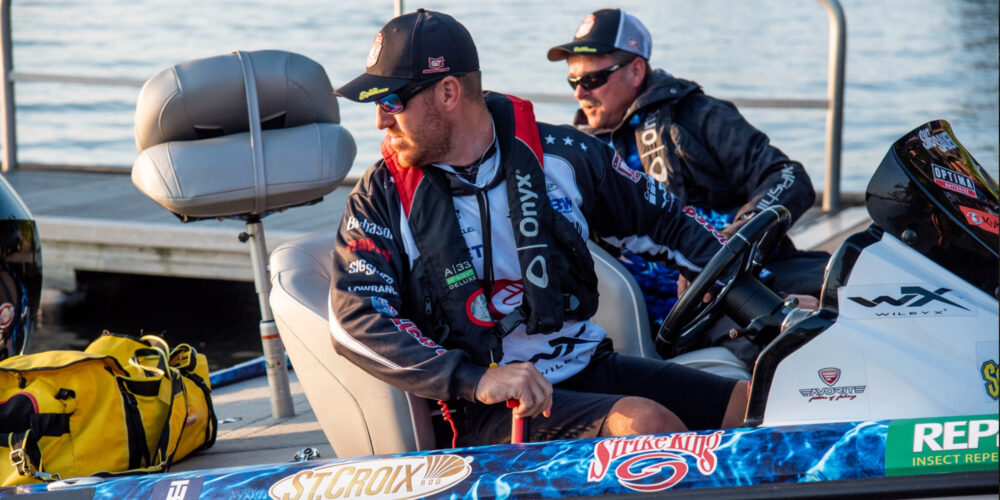 SYRACUSE, N.Y. – Competitors who advanced to Sudden Death Round 2 at the Bass Pro Shops Heritage Cup Presented by Berkley found themselves headed to a new lake after the Elimination Rounds.

After competing on Henderson Bay of Lake Ontario, they were headed to Skaneateles Lake, a deep and clear glacial lake brimming with smallmouth bass.

The Target Weight for the day was 23-pounds and Jacob Wheeler was the first to hit that mark, followed by Jacob Powroznik.

Ride Around Was Key for Wheeler

Skaneateles was a complete unknown for Jacob Wheeler, but during the ride around period, he saw something that caught his attention.

“I had never seen the lake, but when we launched, I noticed that just about everywhere was sandy and had grass,” he said. “I saw one area that had some rocks and made a mental note about it because smallmouth and rocks always go hand in hand.”

Right away, he noticed that the water was exceptionally clear and that gave him an idea of what to use.

“I could see down to the bottom in 14-feet of water and could see smallmouth swimming around. They were cruising fish and not spawners,” Wheeler recalled and said he started the day by picking some of them off by pitching to fish he saw with a Googan Baits Rattlin’ Ned before switching the lure that allowed him to be the first to reach the Target Weight.

“I figured out that if you could stay off of those fish you saw, you could catch them with a hair jig,” Wheeler said and added that typically he would fish hair jigs that are 1/16- and 1/8-ounce but decided to go heavier this time around.

“Normally, with a hair jig for smallmouth, all you have to do is cast it out and reel it back in slowly, but about 90 percent of my bites were occurring on the fall and they would hit it so hard. Since they were in 10 to 12 feet of water, I went up to a 1/4-ounce jig and that helped because of the way they were biting,” Wheeler recapped.

He used a VMC Dominator Marabou Jig in black with a small 1/4-inch section of a Googan Baits Lunker Log Stick Bait on the shank of the jighead. He did this for two reasons.

“One, it puffs the hair out a little bit. But the other benefit is that you can cast it so much further out,” he shared. “Just add a small piece of a Lunker Log or whatever stick worm you like and it will really help your casting.”

“That’s not the rod I would normally use for a hair jig, but in the MLF Cup format you never know what to expect and I didn’t plan on catching them on a hair jig,” Wheeler shared and added that a longer rod with a lighter tip is better suited for fishing these small jigs.