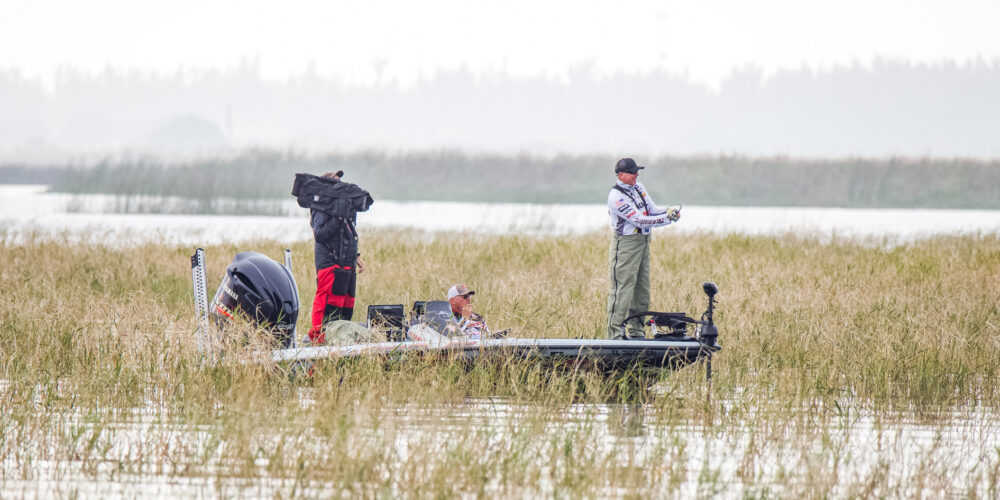 With the chilly nights and shorter days of early autumn, bass anglers might easily overlook some of the best topwater action of the year.

But not Randall Tharp.

“One of the best times to fish a hollow-bodied frog is fall,” says the MLF pro from Florida, who has amassed over $2 million in tournament winnings during his career. “It’s one of the most exciting forms of fishing, a kind of in-your-face, very visual technique where you actually see the strike. There’s no more exciting way to fish than with a hollow-bodied frog.”

One of the most rewarding aspects of frogging is that a large part of the action takes place in “big fish” water.

“I’ve based my whole career on the fact that the biggest bass that swim in any body of water like to be in or around heavy cover,” says Tharp.

Mr. Inside, Mr. Outside

Tharp takes an inside/outside approach when fishing frogs in heavy cover. He’s an acknowledged master of punching, a heavy cover technique that employs a heavy bullet weight and plastic bait to penetrate thick vegetation beds. Frogging is the perfect adjunct to punching, bringing a bass’s attention to the surface of the jungle to draw them out.

For Tharp, the fine points of fishing a frog begin with the frog itself. The first order of business is to present a frog the fish can find.

“I like the Terminator Walking Frog,” says Tharp. “With this (heavy cover) technique, I never use a popping frog or anything of that nature. I want the frog to come through the cover easily and be large and visible as I work it over the top.”

He fishes a black frog in heavy cover “nine times out of 10,” reasoning that the fish is not getting a clear look at the frog but hunting its silhouette.

He will add weight to his faux frog so that it penetrates the carpet and is easier for the bass to find.

“I carry small brass balls, brass Carolina rig weights, to add to the frog cavity, especially when the mat is super thick or when I’m fishing in thick decaying vegetation,” he says.

He will normally add one to three such weights.

“The heavier the frog, the better,” Tharp advises. “You want a frog that really makes an impression on the surface. A weighted frog casts further, too. Another benefit is the extra weight inside the frog increases your hookups. Bass get a mouthful of slime when they take the frog, and the extra weight keeps the frog from getting pushed out of the mouth.”

Tharp takes a slow – extremely slow – approach to his frog presentation in cover.

“People can’t believe how slow I fish a frog,” he says. “I feel the thicker the cover, the slower I need to fish. It’s difficult to locate fish out there, but I still feel I get more bites and particularly more hookups when the frog is motionless than when it is moving. When you’re moving the frog, your hookups ratio goes down.”

Though Tharp’s reputation has come largely from fishing the jungle, he’s more likely to fish a frog in open water.

“Believe it or not, now in my career I open water frog fish more than I do in heavy cover,” he says. “In a perfect world, I could go to Guntersville, Chickamauga or some of those lakes in Florida anytime and do the heavy cover thing. But most of the time, we are fishing those lakes in spring before the vegetation comes up. There’s actually more opportunity to fish a frog in open water.”

“Open water” frogging includes skipping hollow-bodied frogs under docks and overhanging trees and fishing the water off the edges of thick vegetation. His frogs of choice for the technique include the Terminator Popping Frog and the Terminator Walking Frog Junior (2.5-inch).

“I still favor bluegill colors or a black frog, even in open water,” he says. “I keep it simple.”

Editors note: In Part 2, Tharp will dig into the fine details of frogging tackle and presentation