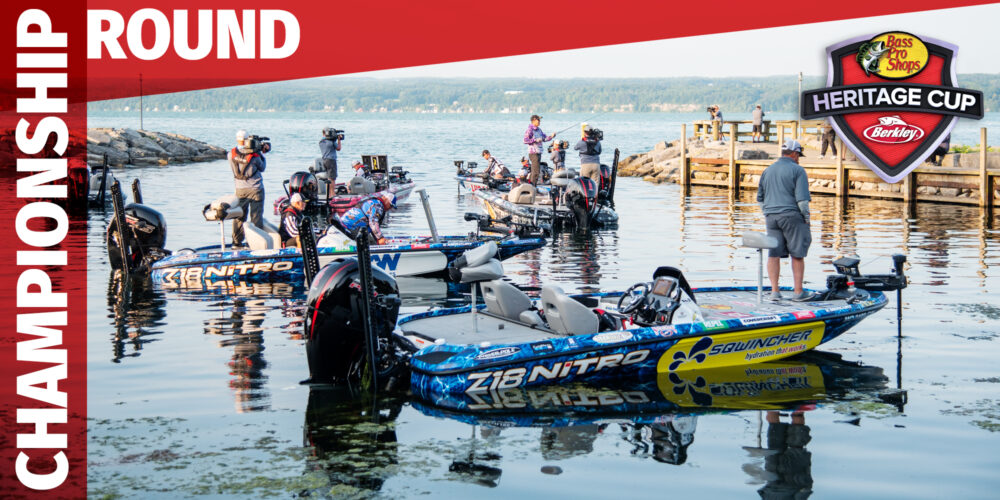 SYRACUSE, N.Y. – From 30 anglers down to just eight, it’s time for the Championship Round of the Bass Pro Shops Heritage Cup Presented by Berkley. Dustin Connell, Aaron Martens, Brandon Palaniuk, Jacob Powroznik, Mark Rose, Terry Scroggins, Greg Vinson and Jacob Wheeler will compete against each other on Cayuga Lake in central New York to be the angler on top of SCORETRACKER® when all is said and done.

For the first five rounds of competition, it’s been all about the smallmouth. Henderson Bay and Lake Skaneateles proved to be two bodies of water that housed some impressive numbers of smallmouth while those anglers who went in search of largemouth struggled.

Saturday, the anglers’ attention should shift away from the brown fish and more towards the green fish. Cayuga Lake is covered in aquatic vegetation, mainly water cabbage. The 19-mile long lake with 55 miles of shoreline has a ring of water cabbage that lines the lake’s inner rim and grows to depths of 25 feet. It’s a perfect place to look for schooling largemouth.

MLF analyst Marty Stone said he expects to see a lot of pitching and flipping in the Championship Round. Heavy jigs of the 1/2-ounce to 1-ounce variety will be the norm in this group of heavy hitters.

If the pros try to work more shallow, Stone says to look for them to focus more on boat docks, one of the few pieces of structure on the lake. Still, he thinks some anglers may take a shot at working offshore where Cayuga Lake can reach depths of over 400 feet.

Breaking Down the Field

One name to look out for is Brandon Palaniuk. The Idaho pro won not only his Elimination Round but also finished first in his Sudden Death Round. Palaniuk had the smallmouth bite figured out on Henderson Bay and Lake Skaneateles, but as we shift more to largemouth how will he fare?

Jacob Wheeler seems to be in contention in just about every single MLF event he fishes. The 2019 General Tire World Champion, 2019 Bass Pro Tour Stage Seven and 2020 Stage One Champion knows how to win in the MLF format no matter where he is fishing.

Another two-time Bass Pro Tour Stage champion is Jacob Powroznik. He entered the Heritage Cup as the No. 1-ranked angler in terms of points for Stages Three and Four of the 2019 Bass Pro Tour. Powroznik won 2019 Stage Three in Raleigh, N.C. before winning Stage Two Okeechobee in the 2020 Bass Pro Tour less than a month ago.

Aaron Martens took home the 2019 Stage Seven championship on Table Rock Lake. He’s another angler that has found success searching for smallmouth this week. Just like Palaniuk, we will see if the California native can start looking for largemouth in the Cayuga Lake water cabbage.

The anglers will fish for three periods on Cayuga Lake to try and catch more weight than the rest of the field. The angler on top of SCORETRACKER® after three periods will be the 2020 Heritage Cup champion.

The eight competing anglers bring us the Championship Round on Saturday, March 21 at 2 p.m. ET on Outdoor Channel.