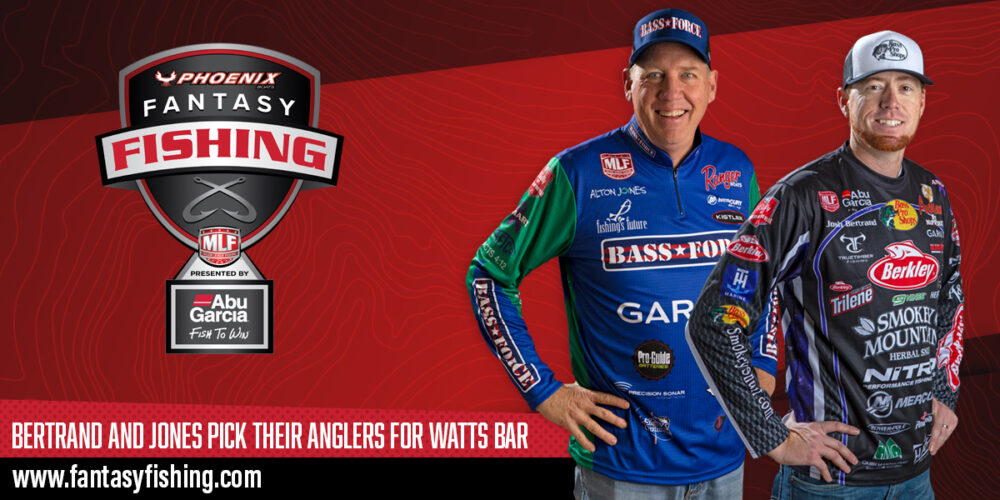 Alton Jones and Josh Bertrand are back to give some picks for their respective Phoenix Fantasy Fishing Presented by Abu Garcia teams. They’ve made their picks at FantasyFishing.com and they’re here to drop a little insight into their thinking on who’ll be the ones to beat at Watts Bar Lake for the General Tire Stage Five Presented by Covercraft.

There’s no shortage of pros on the Bass Pro Tour who hail from the Volunteer State, and many of those pros have tons of experience on TVA lakes like Watts Bar. With that in mind, both Bertrand and Jones have Tennessee well represented on their teams for this event.

“I’m picking Michael Neal, not just because he’s the hottest angler on the planet right now,” Jones said. “It’s also because he lives right there near Watts Bar and probably has some good experience there. Really, that’s the same reason I’m going with Wesley Strader as well since he’s from Spring City and has fished Watts Bar for many years.”

“Brandon Coulter is a guy to watch out for because he lives on Watts Bar and is a Tennessee River rat,” Bertrand said. “He’s not highly ranked in the points right now, so if you’re looking for a guy outside the Top 40 who can earn you some solid points this week, Coulter is your guy.”

Both Jones and Bertrand also picked Jacob Wheeler for their teams because, well, he’s Jacob Wheeler and no one on planet Earth is fishing better than he is right now.

Betting on the Bama Boys

Another popular state for the Bass Pro Tour field is Alabama, a state which holds other TVA lakes similar to Watts Bar. Jones and Bertrand think that experience on lakes like Lake Guntersville will help anglers comprehend a place like Watts Bar.

“A dark horse for this week is Justin Lucas,” Jones said. “He’s not from Tennessee but he does have familiarity with the Tennessee River being down there at Lake Guntersville in Alabama. He’s got a chance to do really well this week.”

“Jordan Lee grew up fishing the Tennessee River, just further down the chain at Guntersville,” Bertrand said. “Also, he’s Jordan Lee. There’s also something to be said for a guy who goes fishing every day during the summer, and that’s what Matt Lee does. I’m picking Matt for much of the same reasons I’m picking Jordan, but add on that Matt knows how to catch them in the summertime and he’s dialed in right now.”

Now, one of these picks isn’t necessarily a “dark horse” and more of a “front runner.” Still, due to his struggles in the first half of the season, Ott DeFoe finds himself in the bottom half of the Bally Bet Angler of the Year standings in 44th place. But if there’s any time that DeFoe was going to right the ship, Jones thinks this is the perfect time for him to do so.

“Ott DeFoe is a guy I’m going with in Group B because of his familiarity with the Tennessee River,” Jones said. “Don’t pay any mind to Ott’s recent struggles. He’s back somewhere he’s extremely comfortable fishing and he’ll no doubt be a player in this thing. It’s Tennessee, it’s a TVA lake and that spells Ott DeFoe.”

As for Bertrand, his “dark horse” sits inside the Top 40, but he may not be a guy that a lot of people think of on a TVA lake.

“Casey Ashley is a dark horse for me this week because of the number of docks on Watts Bar,” Bertrand said. “The dock strategy is kind of a sneaky-good deal on this lake and Casey is a guy that can take advantage of that. He’ll figure out some sort of shallow deal and quietly do really well.”

The deadline to build your team at FantasyFishing.com is Saturday, June 4 at 7:30 a.m. ET. Be sure to make your picks before then to take the top spot in your league.