FANTASYFISHING.COM INSIDER: Crafty Picks for James River While Taking a Stab at the Unknown 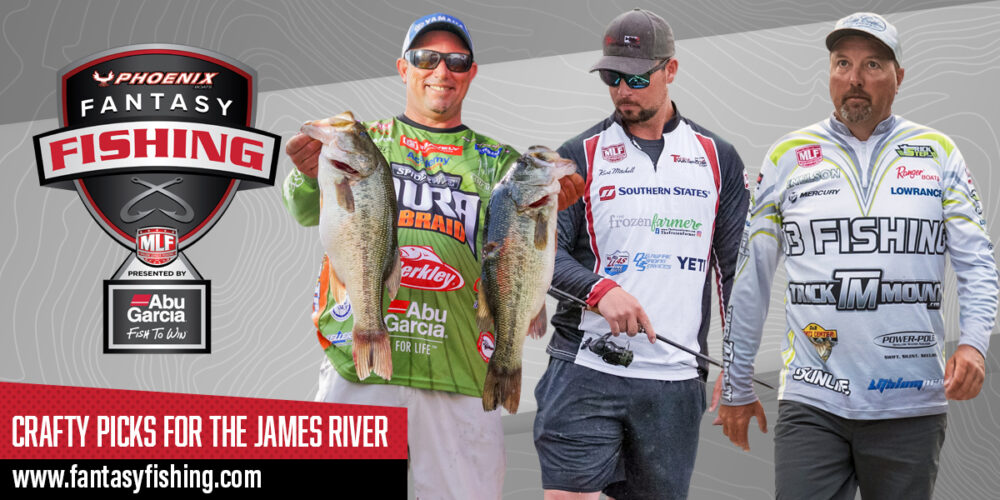 The fifth stop of the Tackle Warehouse Pro Circuit Presented by Fuel Me finds the pros headed to the James River. This will be only the second time the Pro Circuit or FLW Tour has hit the James, with the first time being back in 2003, so data on who should do well is sparse at best. Plus, though Bassmaster Opens are held there regularly, the Pro Circuit field doesn’t always fish those events, and they’ve recently featured larger fields and more locals than the Pro Circuit boasts.

While this event is sure to be exciting from an Angler of the Year and Polaris Rookie of the Year perspective, it’s not ideal for easily picking a fantasy team that will do well. So, here’s who I have penciled in, albeit with even less confidence than usual.

For Flight 1, I took Jacopo Gallelli, Andrew Loberg, Nick LeBrun, Ron Nelson and Keith Carson. Compared to Flight 2, Flight 1 is oddly devoid of established top-tier talent and locals, so I ended up trying to match skills and experience to the fishery, which may or may not go well.

Loberg Could Be Good Back East

The Pro Circuit actually has quite a bit of tidal expertise in the field, though not a ton of the anglers call the James home. Loberg, who was leading Rookie of the Year until recently, is one of those anglers with some tidal chops, having won a Toyota Series event on the California Delta in 2021. This is also a good chance for him to get a leg up on his fellow rookies on a body of water where the experience level is close to equal, so I expect him to come out swinging.

Nelson Isn’t Just There for Smallies and the Spawn

The AOY in 2020, it looks like Nelson has remembered how to fish again. He also has some previous success on the James back in 2014 at the Series level. Though Nelson is always dangerous around the spawn and when smallmouth are in play, he’s also a superb shallow-water largemouth angler, having perfected his skills in the South, at Champlain and the Potomac. Tidal changes on the James are more severe than on the Potomac, but Nelson is an extremely intelligent angler who should be able to go with the flow. If there’s a good bite shallow, it’s hard not to see him in the mix.

I love the idea of having both John Cox and Carson on the squad, but my one tin boat this time around is Carson. Very adept shallow and knowledgeable about flow due to his experience on the St. Johns River, Carson has what it takes to do well at the James. As far as I can tell, his only previous experience there is driving over it on a highway, but going with Carson seems like a gamble with a pretty high upside. While his boat isn’t really in the same class as what Keith Poche runs in the Opens, I don’t see him being afraid to get skinny with it.

The second group to pick from is absolutely loaded and contains a lot of the local talent in the field. So I took some high-level talent and the locals, going with Justin Lucas, Kurt Mitchell, Bobby Lane, Martin Villa and Cody Pike.

If you look at the stats, Mitchell isn’t an overwhelming tidal ace, but he has the upbringing to be one, and he can tell you more than a few stories about “what could’ve been.” His style of fishing should suit the James well, and he’s fishing lights-out this season, which bodes well for the step north in the schedule. I think there’s a pretty good chance Mitchell finishes in the Top 10 in the standings at year-end, and a good finish at the James is going to help the cause.

I know the Potomac isn’t the exact same as the James River, but gosh does Lane have some highlights there. Between 2007 and 2011, Lane won two FLW events on the river and finished third twice. Back in 2003, Lane finished third in the BFL All-American at the Tensaw Delta (however, one of the anglers he finished behind was later disqualified). Plus, he’s done well at Winyah Bay on the Elite Series and smoked ‘em on the Mississippi River a number of times. Basically, I’m not really worried about the lack of experience on the James, and I think any team for this derby is probably incomplete without a Lane or two (or maybe three).

I’m Not Worried About the Locals

As far as locals go on the James — Pike, Villa and sort of Todd Walters are the folks with the most experience. None of them are slam dunks, but Villa has fished really well the last few years and Pike is definitely the most local of the bunch. Pike has had a dismal year so far, but I don’t think picking him requires too much explaining. Back in 2021, in his rookie year, he held up very well on his other home fishery, the Potomac River, and he should be good to go for this one. Villa is the wild card, as he’s fished the James a number of times, but can’t really call it home like Pike. Still, he’s been very impressive at the lower levels lately, and he seems to be rounding into form enough on the Pro Circuit that I want to be there for the breakout.