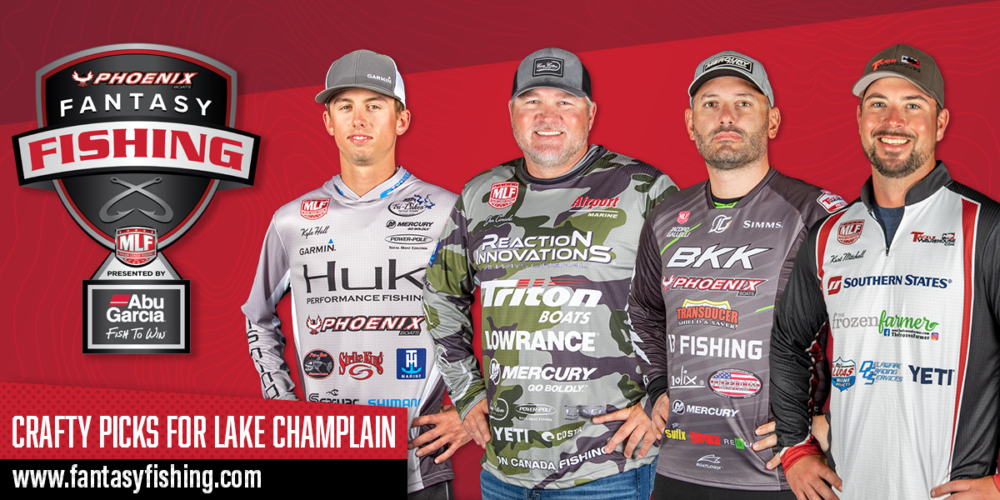 Wrapping up the Tackle Warehouse Pro Circuit Presented by Fuel Me regular season at Lake Champlain is ideal from a lot of perspectives. Other than the price to get there from the South, you have great fishing to send everyone home happy, gorgeous scenery and weather that likely won’t require A/C. So, with any luck, Covercraft Stop 6 Presented by Wiley X should be excellent from start to finish.

From a Phoenix Fantasy Fishing Presented by Abu Garcia perspective, the season finale offers a few more variables to consider than usual. Because of the Tackle Warehouse TITLE implications, you have some pros that have already taken the long run to Ticonderoga off the table, and others that will do anything to swing for a high finish. Plus, if you take last year’s Bass Pro Tour event at about the same time as a guide, there are a ton of possible patterns in play, which means you could find a lot of anglers with the requisite strengths.

So, here’s who I have on the Champlain squad.

The crew for Flight 1 is a bit of a mix between historical and recent performance as well as aptitude for the lake. In Angler of the Year order, I went with Michael Neal, Jacopo Gallelli, Spencer Shuffield, Grae Buck and Jon Canada. I don’t think any of them need much explanation, but we’ll dip into a little reasoning on some of the picks below.

Sitting at fourth in the AOY race, Gallelli is looking great to qualify for the Bass Pro Tour and seems to be pretty unstoppable. Last year, Gallelli did really well with largemouth up north, making the Top 10 in Stage Six of the 2021 Bass Pro Tour. Then, he earned a check by catching a lot of largemouth in the Pro Circuit event on the St. Lawrence River. Now, he’s fresh off a Top 10 in a Bassmaster Open on Oneida that was all about smallmouth.

My point is, despite his relative lack of experience in the States, it doesn’t seem like there’s anything he can’t do. So, green or brown, I think Gallelli has a shot to put up a great finish at Champlain.

Canada Can Produce up North

The winner at Stop 3 on Pickwick Lake, Canada isn’t just a fit in the South, having basically spent his last two summers chasing smallmouths mostly in the 1,000 Islands region. Recently in pre-practice at Champlain, Canada waypointed an ungodly number of boulders, which may well come in handy on derby day. I think there are pretty good odds that Canada commits to the north end, and I think his spinning rod skills will go a long way.

I’m really excited about Flight 2, so much so that I’m probably dooming them to failure. Still, I was thrilled with who I was able to put on the squad for this group. Leading off, I went with smallmouth master Justin Lucas, then Matt Becker, Dakota Ebare, Kurt Mitchell and Kyle Hall.

Mitchell Could Be Your Largemouth Guy

As we’ve seen at East Coast rivers, picking Mitchell is something to do at your own peril. Still, he’s one of only a handful of anglers in the field who I think could put together a winning pattern north or south. Back in 2019, Mitchell fished north and south to finish fifth in a Toyota Series event on Champlain, which puts him in pretty rarified air. Up north, he has a good largemouth system, and if the fishing is good at Ti, he’s not afraid to make the run for glory.

Looking for Round Two from Hall and Ebare

Last year, Hall and Ebare crushed LiveScope smallies in the Toyota Series event, and I fully expect them to do the same thing this year. Despite Texas addresses, they’ve both put in a ton of time up north, and they’re at the top of the game when it comes to forward-facing sonar, which pretty handily dominated multi-day tournaments on Champlain in 2021. Finally, I wouldn’t worry too much about Hall’s sub-par season – the 2020 Rookie of the Year has still got it, and this event is in his wheelhouse.