FANTASYFISHING.COM INSIDER: How the Game’s Top Players Have Been Making Their Picks This Season 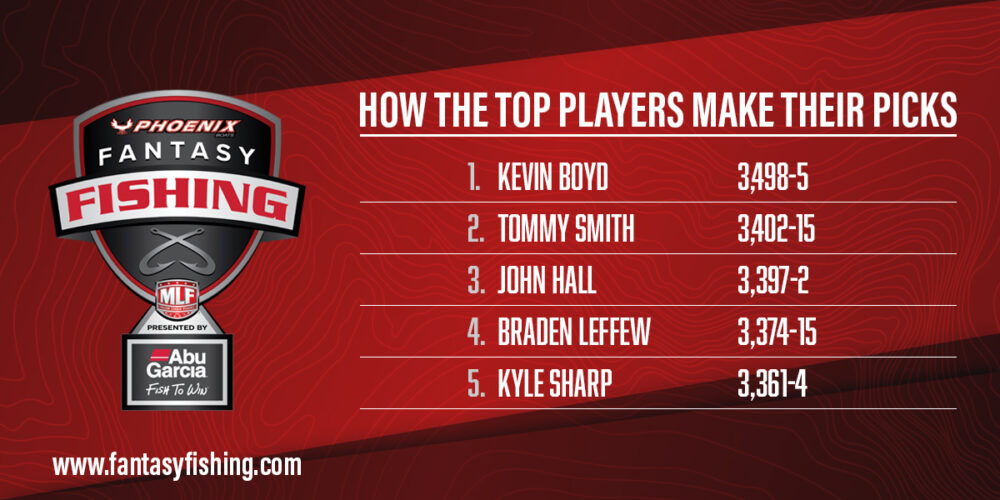 Now nearly halfway through the 2022 Bass Pro Tour season, here's how some of the top fantasy players on FantasyFIshing.com are choosing their winning teams.
April 28, 2022 • Mason Prince • Fantasy Fishing

It’s about the halfway point of the 2022 Bass Pro Tour season, and it’s been quite the start to the year for both the 80-angler field and the managers playing Phoenix Fantasy Fishing Presented by Abu Garcia. Before every event, countless players begin building their respective teams in hopes of pushing their way toward the top of the standings.

Every fantasy manager has a different strategy when it comes to building a team and nobody’s formula is exactly the same. But clearly, some strategies are just flat-out working: there’s a reason why the Top 5 players in Bass Pro Tour all have more than 3,300 points.

We have our own Fantasy Fishing insiders with their own strategies, but how about the thousands of other strategies out there? We connected with some of the top BPT Fantasy Fishing team managers from around the world to get their thoughts and game plans when it comes to building out their teams.

While it may sound simple, it’s worked out that Smith’s favorites have performed well so far this season: Lee, Wheeler and Thrift are all in the top three in the Bally Bet Angler of the Year race and Connell already has a win to his credit this season from Stage Three.

Sometimes playing favorites does pay off in a big way.

Michigan-based fantasy manager Kyle Sharp sits in fifth place on the overall leaderboard with 3,361-4 heading into Stage Four on Lake of the Ozarks. He’s showing off some bass-fishing knowledge when it comes to his fantasy picks, but bass hasn’t always been his main species of choice.

“I’m not sure if it’s an advantage or a disadvantage, but I’ve only been bass fishing and really following professional bass fishing for the past five years,” Sharp admitted. “I’ve always been a walleye guy, being from Michigan. These past few years has been a lot of fun really getting more into bass fishing.”

Sharp takes a two-pronged approach to selecting his anglers for each event.

“I’ll start with picking the guys who are always consistent no matter where they go like Michael Neal, Wheeler, Lee and both Jonathon VanDam and Kevin VanDam this season,” Sharp laid out. “From there, I look at the lake and the time of year the guys are there and decide the rest of my picks off of strengths that could pay off at that lake. I usually tend to lean more toward well-rounded guys rather than guys who do just one technique and stick to only doing that one technique.”

It’s been a solid start to the season for John Hall of Tennessee as he sits in third place worldwide with 3,397-2. Hall follows all of the Bass Pro Tour angler’s social media channels and scours them throughout practice to see if he pick up clues about who might have a secret spot or sneaky advantage.

While he looks for an edge through his Instagram feed, Hall admits that he already has a little idea of who he’s going to pick before each event thanks to the development in technology.

“I feel like everyone picks the guys towards the top of the AOY standings and that’s to be expected,” Hall said. “But I have really leaned on some younger guys this year because of their ability to utilize their forward-facing sonar so well. Jordan Lee, Jacob Wheeler, Michael Neal and guys like that.”

Hall credits most of his success to spending time researching fisheries, past history, but he believes that he’s made a splash picking anglers ranked below 40th place in the AOY race.

“Everyone is going to pick Wheeler and Lee and guys up there, but those guys lower in the standings are where your moves are really made,” Hall explained. “For example, I had Luke Clausen (43rd in AOY) at REDCREST because of his history on Grand Lake, he finished in second place. I had Dakota Ebare (47th in AOY at the time) at Stage Two and he finished second. So, taking time to pick the right guy over 40th in the AOY standings for each group has been big in my success.”

Be sure to make your picks for the Bass Boat Technologies Stage Four Presented by Bass Cat at Lake of the Ozarks at FantasyFishing.com. The deadline for picks is Saturday, April 30, at 7:30 a.m. ET.