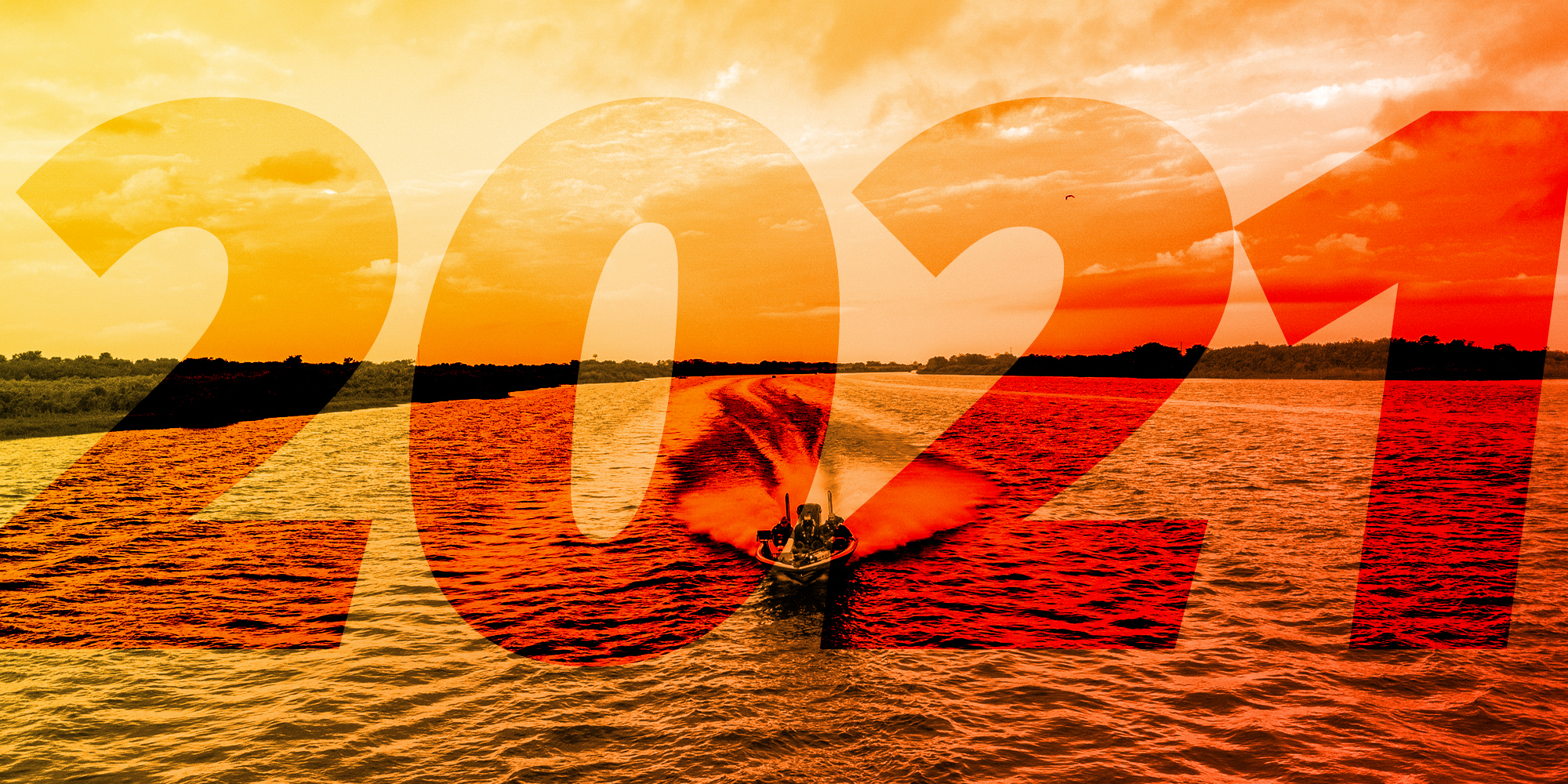 The 2021 MLF Bass Pro Tour schedule includes stops at the best largemouth and smallmouth fisheries in the country.

TULSA, Okla. – With today’s announcement of the 2021 MLF Bass Pro Tour schedule, the 80 anglers competing on MLF’s highest-level tournament circuit can begin to set their sights on a return to the big-fish sweepstakes that defined the COVID-shortened 2020 regular season.

Much as they were in 2020 on big-bass fisheries like Lake Eufaula, Lake Fork, Lake Okeechobee and the Kissimmee Chain, Bass Pro Tour anglers will be on the hunt for trophy-sized largemouth and smallmouth in 2021. The schedule includes seven regular-season tournaments and a bonus big-fish event, with stops in Texas, Florida, North Carolina and Tennessee through the first half of the schedule; two of the world’s best smallmouth fisheries and one of the most productive multi-species lakes in the country in the second half of the season; and a championship event with a $300,000 top prize to kick it all off in February.

The 2021 MLF Bass Pro Tour tournament calendar begins February 23-27 on Grand Lake, Oklahoma with REDCREST 2021, and then rolls through a seven-event regular season and a big-fish “bonus” event (Heavy Hitters 2021) before ending in mid-September on Lake St. Clair, Michigan.

Four MLF Cup events will follow in the fall.

“All I can say is ‘Wow,” said Shaw Grigsby, a member of the angler committee tasked with identifying locations and dates for Bass Pro Tour competitions. “I don’t think we could’ve picked a better schedule – every one of these locations are great fisheries. They’re really well-thought-out and well-positioned for the times of year we’re fishing them. You’re talking about some of the best places in the country you can go to for both largemouth and smallmouth, I’m thrilled with this schedule.”

The late-February Bass Pro Tour championship event brings the 40 top finishers from the 2020 Bass Pro Tour Angler of the Year standings to Grand Lake O’ the Cherokees at a time in mid-winter when virtually all of its 46,500 acres are relevant. Fish will be in prespawn, and the bite will be spread from the rocky river section at the top end to the dam on the bottom end.

Oklahoma pro Edwin Evers showed off Grand’s late-winter potential when he brought a five-fish bag of over 29 pounds to the scales at the 2016 Bassmaster Classic.

“I’m really excited about what it will mean to my home state and the City of Tulsa,” said Evers, who also happens to own the only existing REDCREST champion’s trophy after claiming the inaugural championship in 2019. “If you think I’m looking forward to defending my REDCREST title on my home waters, you’d be absolutely right.”

This impoundment of the Angelina River in East Texas has been at the top of the site-selection committee’s wishlist since the start of Bass Pro Tour competition in 2019, and for good reason: Sam Rayburn has been one of the most prolific tournament fisheries in the country in recent memory, and is a consistent producer of 10-plus-pound largemouth (a 12 ½-pounder was registered to the Toyota ShareLunker program in February this year).

“Sam Rayburn is just a stunningly great place to fish,” Grigsby said. “That’s a lake where you could catch a 13-pounder just as likely as you could a 6-pounder.”

The last time MLF showed up at Falls, Jordan and Shearon Harris lakes outside of Raleigh – for 2019 Bass Pro Tour Stage Two – the bass world was left with a new bucket-list largemouth destination as 69 fish between 6 and 9 pounds made their way onto SCORETRACKER® that week.

“I can’t remember a day in my life where I could consistently catch 3- to 5-pounders all day long like we were able to do in Raleigh,” said Jacob Wheeler of the 2019 event. “I’d hook a 4-pounder and say to myself, ‘That was a little one.’ When can you say that a 4-pounder is a little one? Never! You look at those numbers and understand that what happened in Raleigh (in 2019) was on a whole new level of good.”

MLF pro Mark Rose can thank this impoundment of the Colorado River west of Austin for a $125,000 payday in the 2018 FLW Tour (the second of historic back-to-back wins for the Arkansas pro). Cliff Pace and James Elam can thank it for two of the biggest bass they’ve caught in competition (Pace a 10-5, Elam a 9-6).

When MLF arrives here in early May, fish will be mostly postspawn and moving deeper (with a few late-spawning outliers), and both numbers and size should be good.

The Harris Chain of Lakes in Central Florida is a longtime favorite of national tournament circuits for good reason: the lakes in this seven-lake chain (Lake Harris, Little Lake Harris, Lake Eustis, etc.) are consistent producers of 4- to 5-pound largemouth, and capable of kicking out 8- to 10-pounders (Lake Harris alone has produced 27 8-plus-pounders for Florida’s Trophy Catch program in 2020).

It’s this good: Scroggins and son Johnathon weighed in a 37-3 five-fish bag at the Glenn Browne Memorial tournament held on Lake Harris in 2019 (including a 9-3 big fish).

This impoundment of the Tennessee River rocketed into rarified air in 2013, when FLW rookie Casey Martin sacked up 103-3 in a four-day/20-fish event, and it’s been one of the most productive, dependable tournament lakes in the country ever since.

One could argue that the mighty St. Lawrence River is among the top three smallmouth fisheries in the country, and multiple MLF pros would likely agree: Kevin VanDam, Edwin Evers, Josh Bertrand and Gary Klein have all posted wins on this massive waterway that pours out of Lake Ontario.

But as prolific as the St. Lawrence has proven to be over the years in mid- to late-summer tournaments, the late-June timing of Stage Five (and the catch/weigh/release format) should shed light on some different aspects of the fishery.

Both species will again be in play when Stage Six kicks off in early August.

The regular-season finale out of St. Clair Shores on Lake St. Clair will determine the 2021 Angler of the Year, as well as REDCREST 2022 and Heavy Hitters 2022 qualification. It’ll all go down on a late-summer smallmouth fishery that also sits firmly in the top three in the country: mid-September on Lake St. Clair will produce both numbers and size to finish out the 2021 regular season.

“There’s something for everybody in this schedule,” Grigsby said. “These are all really well-established tournament fisheries – when we sat down in 2019 and made a list of THE best fisheries in the country, these were all on that list. You take the MLF every-scorable-fish-counts format and put us on some of the best fisheries in the world, it’s going to be amazing.”