Edwin Invincible: Evers’ 2019 Season was Truly One for the Ages 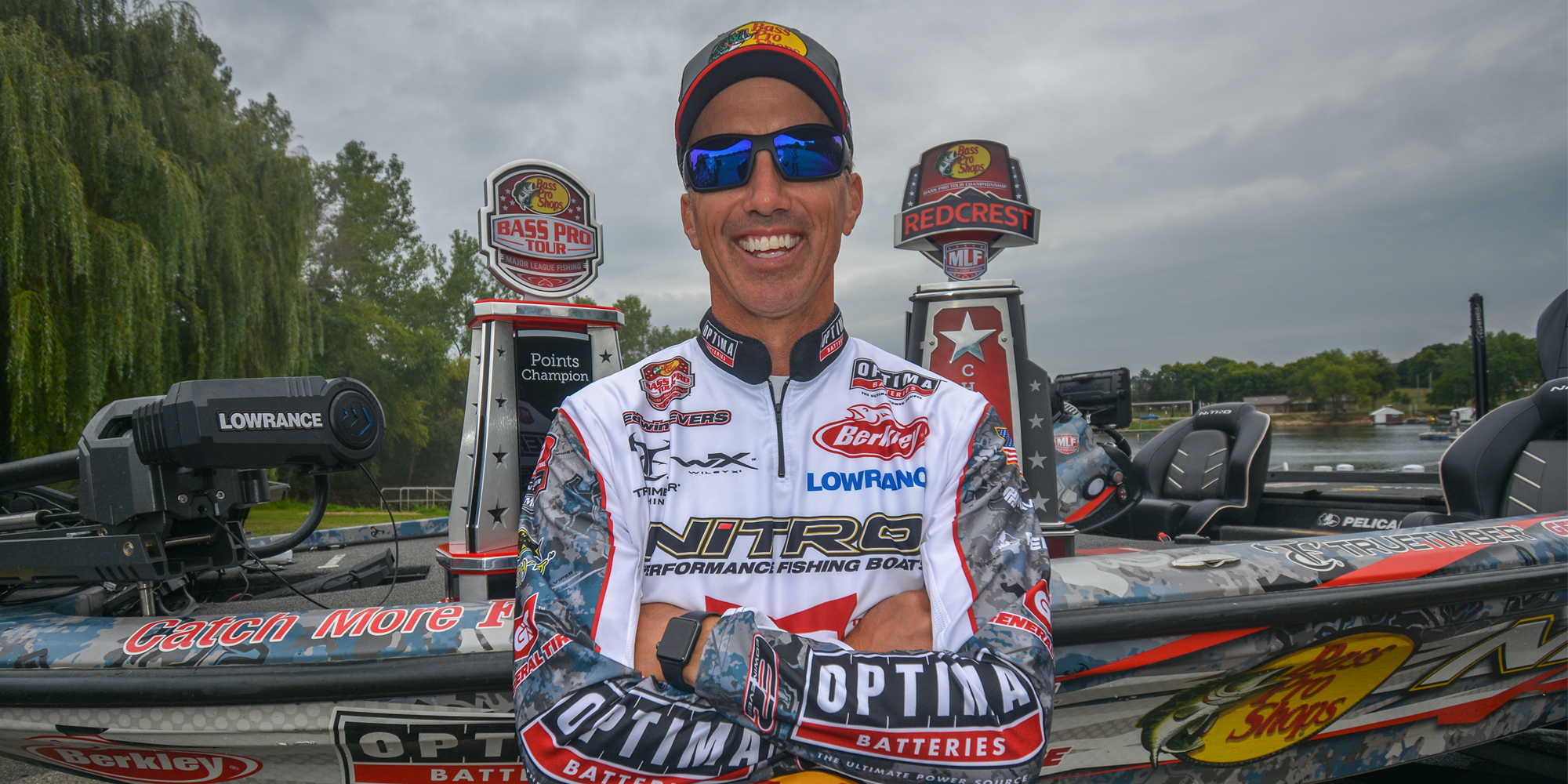 Edwin Evers bookended his phenomenal 2019 season with both a Points Championship trophy and a REDCREST title. Photo by Joel Shangle

LA CROSSE, Wis. – Edwin Evers is contorted under the rear transom of his Nitro Z21, screwing in the drain plug before he launches back into the Upper Mississippi River in La Crosse, Wisconson. It’s the morning after Evers claimed the REDCREST trophy and its accompanying $300,000 paycheck, and the new champ is here with an MLF Films crew to shoot his “Winning Pattern” video. As he screws the plug in and slowly unfolds his body, a wince crosses his face.

Near as I can tell, this is the first time in 2019 that Edwin Evers appears to not be invincible.

But even this momentary discomfort fits the storyline of his season: Evers is sore this morning because he caught so many bass the day before, in the most important day of competition of the season. He’s sore because at one point on Championship Sunday, he caught so many Mississippi River largemouth on consecutive casts that his hands cramped up on the handles of his Bass Pro Shops reel.

Evers is sore because he was just so damn good on a historical championship day when it mattered the most. Nearly-45-pounds-better-then-the-next-guy good.

We’re Running out of Superlatives

It’s difficult not to fall into hyperbole when describing Evers’ 2019 season. From the second-place finish at the first Bass Pro Tour event in history in Kissimmee, Florida in early February to his merciless beatdown of the rest of the REDCREST field on Championship Sunday on Pool 7 of the Upper Mississippi River last Sunday, the Oklahoma pro put together what most consider one of the best seasons of professional bass fishing since Ray Scott held the first All American Invitational in 1967.

His season was such a success – Evers was so proficient and relentless – that it’s become progressively more difficult to describe it without sounding like you’re telling a tall tale.

I tell him so as we motor away from the dock at Veteran’s Freedom Park.

“We’re running out of superlatives to describe your season,” I tell him, only half kidding “Amazing, outstanding, fantastic, awesome, sensational … we’ve used almost all of them. What’s left? How else do we describe this year? How do you describe it?”

Evers shakes his head and admits: “I don’t even know what to say about it anymore. It’s just hard to believe, honestly. ‘Pinch me, I’m dreaming’, I guess. I just don’t have the right words to explain it all.”

It’s not false modesty, either. As much as Evers has spoken to media and friends and family about his achievements in 2019 – from his win at Stage Two Conroe to his Points Championship win to his new REDCREST trophy – he confesses the same slightly incredulous wonder at his own success. Whenever he’s asked, he just flat admits: “I just don’t have the words…”

The Praise of Peers

Three weeks before REDCREST, we pointed the MLF Films cameras at several of Evers’ peers to ask them if they had the words to describe his 2019 season. And to a man – from Casey Ashley to Terry Scroggins to Mark Daniels, Jr., to Mike Iaconelli – they all had words. Lots of words.

“Somebody who’s never competed in this format can’t appreciate the gravity of what it takes,” said Alton Jones. “It takes tenacity, it takes an extreme work ethic. What it doesn’t take is luck. I’ve just been in awe watching him fly through this season.”

“I would describe Edwin’s season as nothing short of phenomenal,” said Randall Tharp. “He’s really humble about it and kinda blows it off, but to be the best angler out of the 80 guys – and it’s the best field of 80 that’s ever been assembled – to come out on top is an impressive feat.”

History will tell you that there had been only two individuals who had won an Angler of the Year award and their league’s major championship in the same season before Evers pulled it off in 2019: Mark Davis, who claimed the Bassmaster Elite Series AOY and the Bassmaster Classic in 1995; and Kevin VanDam, who accomplished the feat twice (2010 and 2011).

Both are members of the Bass Fishing Hall of Fame. And both marvel at the relentless pace that Evers set throughout all eight laps of the regular season, and the final “bonus” lap at REDCREST.

“In my 30-something years in this business, I’ve watched guys experience success and kinda get into the kind of ‘zone’ that Edwin is in now, but once they know how steep that mountain is to climb, they almost talk themselves out of climbing it again,” Davis says. “From my personal experience, I can tell you that there’s a price to pay to get to the top of that mountain, and there’s a price to pay to stay there when you get there.

“You don’t just roll out of bed every morning and stuff just happens. You’re working on it 365 days a year. Edwin has honestly been in that ‘zone’ for a few years now, but this year especially. And it wouldn’t surprise me to see him do it again next year.”

VanDam assesses Evers’ final day – his 63-fish, 85-pound, 6-ounce slapshot that he blasted right by the 29 other anglers playing goalie at REDCREST – as the ultimate exclamation point on his year as a whole.

“When you’re making decisions and everything is falling into place, it’s an incredible place to be, and Edwin did it all year long to win the Points Championship,” VanDam says. “But to follow that up by winning the championship after all the pressure of the regular season? That’s really special. It’s natural to have a little letdown – he fought so hard and left Winnebago not knowing if he would win (the points title), so to have that relief of finally winning, it would be really easy at that point to say ‘Man, that’s the best it can be’, and not be as focused on the championship.

“What Edwin did was just incredible. You don’t really understand the magnitude of the situation until after the fact. Over the next couple of months, it’ll really sink in for him and Edwin will understand what a truly special year he’s had.”