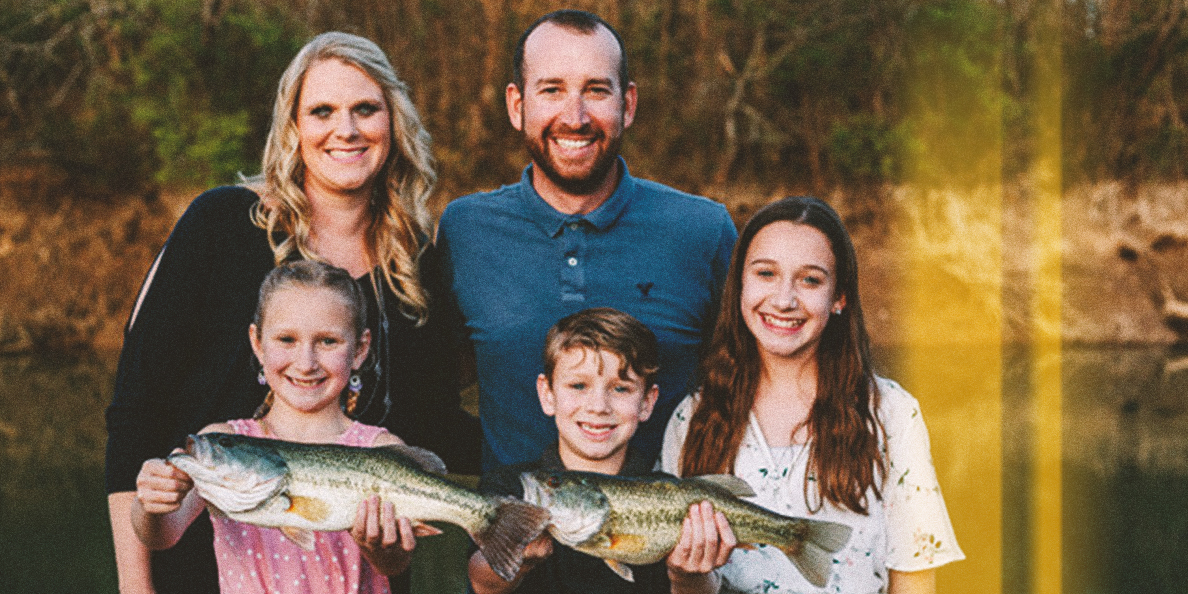 Ott DeFoe and his family. Photo courtesy of Ott DeFoe

At the top of his game in the spring of 2019, 33-year-old MLF pro Ott DeFoe struggled with symptoms and misdiagnoses for as long as he could.

After a couple of trips to urgent care for what he thought was a simple case of bronchitis, Ott noticed the symptoms getting progressively worse. He headed to his primary care doctor who ordered an X-ray assuming it was pneumonia; the initial reading led to an echocardiogram, “just to be on the safe side.”

A few days later while working out at the gym, his wife Jennie received a call from their doctor, who confirmed there was a tear in the mitral valve of Ott’s heart.

“I was absolutely terrified,” Jennie reminisced. “One of my best friends was with me and she kept telling me to breathe and reminding me I was okay. At first, I assumed it would be a minor surgery, but our doctor quickly confirmed that open-heart surgery was a real possibility.”

Jennie’s dad passed away from a heart attack when she was only 22 years old, just two months after her and Ott’s first child, Abbie, was born. So a diagnosis involving such a risky surgery and potentially difficult recovery forced her to wonder if Ott’s first-place finish at the Bassmaster Classic five months earlier would end up being his last major win.

Ott began his fishing career at a very young age. An active child, Ott competed in basketball, baseball and local fishing tournaments. The prospect of winning a little money drove his desire to fish more and more as years passed.

“In seventh grade, my dad told my brother and me that our schedules were too chaotic, and we had to make a choice between our stick-n-ball sports and fishing,” Ott said. “We both chose fishing and I have never once regretted that decision.”

Excerpts from Ott’s family album depict his sentiment as a teenager in 2003.

“My life has been too good to me to change. I have a wonderful family, (a) girlfriend and a way to pass time and make money. I know that many people have it a lot worse than me, so I don’t think I can complain… and… I wouldn’t change a thing.”

And he didn’t. Ott married his girlfriend Jennie in 2005; the couple will celebrate their 15th wedding anniversary in August of this year. With Jennie’s full support, Ott traveled extensively to fish in pursuit of his dream to “make his living as a pro angler.”

Ott began his career as a “professional angler” in 2007. After a decent first year, he went into 2008 with high hopes. He paid his entry fees and entered both the Fishing League Worldwide (FLW) Tour and the FLW Series, only to walk away from the first three tournaments that year without winning a penny.

“Tournament fees were about $3,000 each in 2008 and I had very minimal sponsor dollars, so I lost over $9,000 out of my own pocket in a very short amount of time,” Ott said. “I was married, had an infant at home and was working full-time, which meant my day job paid the bills and fishing had to pay for fishing.”

Ott and Jennie parted with another $3,000 in tournament fees to enter his fourth tournament of the year at Smith Lake in Alabama, but to his dismay, he only caught two fish over the entire first day. The bite was tough: The leader had recorded only 13 pounds, and with only 4 pounds, Ott was 100 places down the roster.

“(After that first day,) Jennie picked me up at the ramp and we headed back to our camper,” Ott recalled. “I was pretty down and knew this was definitely a breaking point. We could only afford to fish one more tournament financially and that was it. It would all be over. Jennie asked me if this is what I felt I was supposed to do and where God wanted me to be… then ‘you better get your butt out there and catch some fish!’

The next day, Ott had one of his biggest days of the tournament, a comeback that moved him into 40th place and sent him home with $10,000.

“Jennie and I were always super frugal. She’s the only person I know who is more determined than me,” Ott laughed. “We married young, but made every financial decision based on the fact that fishing was my dream and we would have to make sacrifices to make that dream a reality.

We worked hard – she waited tables and I worked in construction – and we refused to put tournament fees on a credit card or go into debt, so that 40th-place finish was literally the life or death point of my career.”

That pivotal moment sparked a hot streak for Ott. He went on to take first place on Santee Cooper Lake in South Carolina at the next FLW event, and continued fishing with consistent success for the next decade – earning more than 45 career Top 10s and approaching $2 million in career winnings by late 2018.

In March of 2019, it seemed the DeFoe family was on top of the world when he won the Bassmaster Classic and walked away with $300,000 – his biggest win to date.

That emotional high was short lived.

It was shortly after the Classic win that Ott first noticed the symptoms – shortness of breath and extreme fatigue, which grew worse that April, May, and June. The results of the echocardiogram shook them both to the core, but their faith held steadfast.

“I did my best not to imagine the worst-case scenario, but my mind still went there many times,” Jennie recalled.  “We’ve been together for half of our lives, so the thought of us not being together until we are 100 years old was incredibly scary.”

When Ott went into surgery, the nurse handed Jennie a bag of his belongings. She put his wedding ring on her thumb and spun it around the entire time they were separated.

“It just made me feel better,” she said, shrugging her shoulders. “I think of myself as a pretty independent woman but in that moment, I had the stark realization that I needed my husband just as much as he needed me and that’s okay!

“Walking into the hospital room after Ott’s surgery, I had never been so relieved to see his heavily-drugged, smiling face. During that time, it seemed like a maze of despair, but looking back it’s so easy to see the beautiful path the Lord paved for us.

“I helped as much as the nurses would allow and refused to leave his side for the entire four days he was in the hospital. We kept the kids in the loop but shielded them from the seriousness of the situation.”

Ott was only 33 years old – a proud father of three and in seemingly good health – when his symptoms began.

“It happened without warning, completely out of the blue, and everything just came to a standstill,” Ott said. “Fishing, tournaments, appearances, sponsor engagements – none of it mattered in that moment. Day-to-day plans and chaotic schedules were suddenly inconsequential. The only important thing in that moment was my health and being with the people I loved.”

Ott and Jennie say the challenges they endured last fall allows them to see this moment, when the world sheltered from COVID-19, through an entirely different lens.

“Going through that ordeal gave me a lot of perspective and reminded me of the most important things in life,” Ott continued. “It’s very much the same situation we are dealing with right now as a country.

“I wish the coronavirus pandemic hadn’t happened, that we were fishing like usual and the rest of the world wasn’t hurting and fighting to make it through this. But the one thing almost everyone has gained from this tragedy is time.”

“The one thing almost everyone has gained from this tragedy is time.”

“Life is so busy with work and three kids – it took heart surgery to stop us in our tracks,” Jennie reflected. “Suddenly we had to stay home and that time together allowed us to refocus on what’s really important and reprioritize our lives.”

In a world where “free time” is often filled with athletic schedules, work, parties, ceremonies and endless appointments, many may relate to families only passing one another in a mad dash to the next event.

“This pandemic has truly shown us what hectic lives we choose to live,” Ott said. “We try to blame our ‘schedules’ and outside factors for our crazy lives, but that’s so far from the truth. We choose 95 percent of how we spend our free time and it gets filled up quickly with inconsequential tasks. In times of crisis, those items are the first to go.”

“My health crisis taught me that God puts little breaks of time in our lives for a reason,” Ott said. “In the moment we were terrified, but looking back, I am so thankful for the eight weeks I had at home with my family. After winning the Classic it should have been my busiest year ever, but I am incredibly grateful for the forced pause.”

The last several months have wreaked havoc on much of the world and the DeFoes feel for those who have lost a loved one and/or suffered an economic setback during the pandemic. In spite of the sadness and uncertainty, Ott and Jennie believe strength and opportunity can be found.

“Take advantage of this pause and reinvest in yourself,” Ott advised. “For some that may be diet or exercise, for others like myself, it may be to spend more time learning and growing in your faith. The one thing we can control in life is how we spend the time we have. Make the choice to invest that time in yourself, your faith and your family – that’s a payout money can’t buy.”