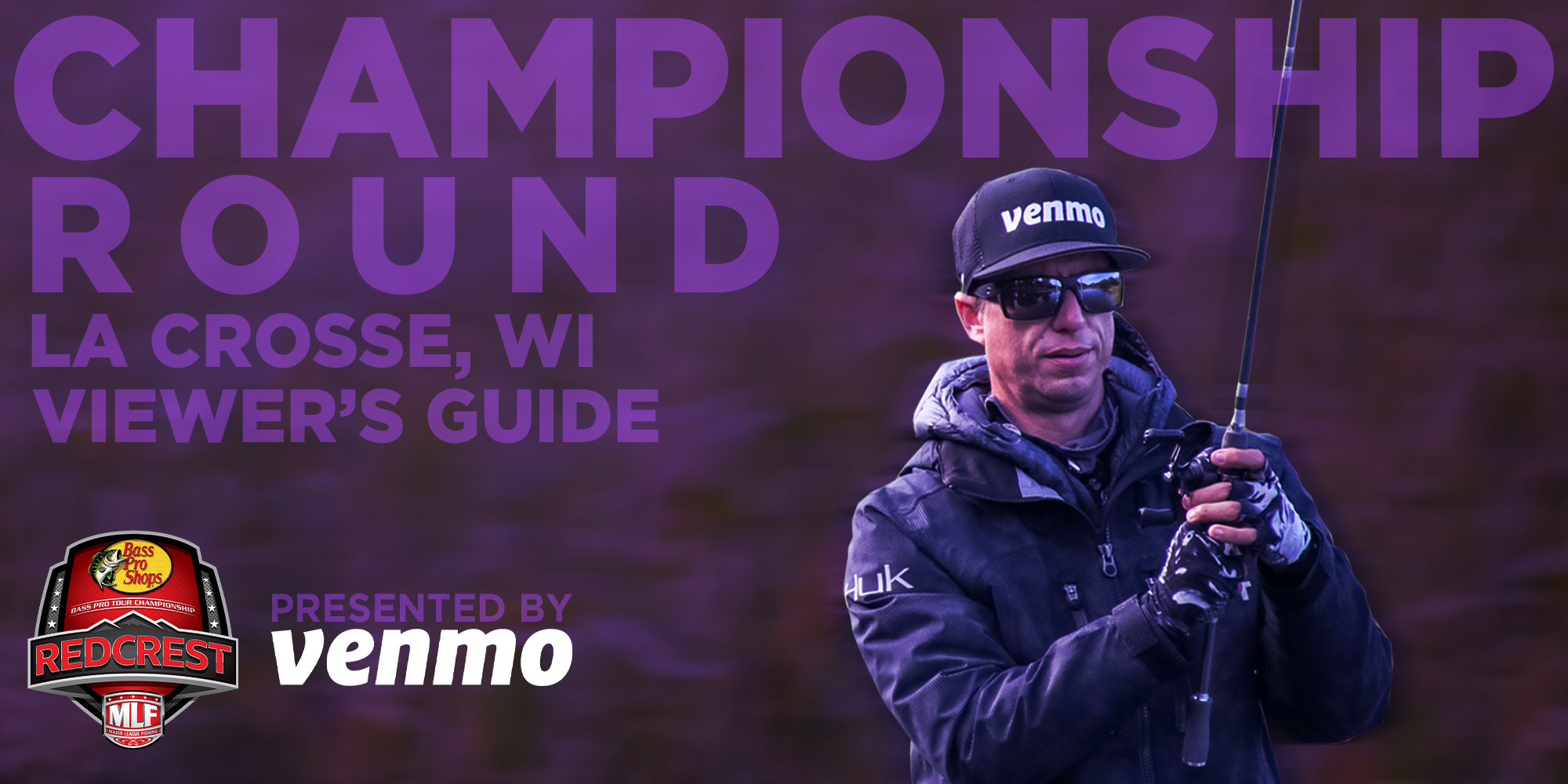 Discovery viewers will see the final battle of the 2019 Bass Pro Tour season when they tune in for the REDCREST championship on Saturday.

LA CROSSE, Wis. – There’s a line at the end of an old Rocky movie from the 1980s that simply goes: “Ding … ding.” The line is uttered by one of two fighters standing in a boxing ring, signifying the bell, and the start of what will surely be a knock-down, drag-out brawl.

For television viewers who tune in to the MLF Bass Pro Tour on Discovery Saturday, Dec. 28 (7 to 9 a.m. Eastern and Pacific time zones), that line is even more appropriate: ding ding, you’re about to see a 10-man battle royal on the Upper Mississippi River in the Championship Round of REDCREST Presented by Venmo.

Saturday’s episode of the mega-popular Saturday-morning Discovery show focuses on the last of the five rounds of the first-ever REDCREST, the end-of-season championship for the MLF Bass Pro Tour. It represents not only the Championship Round of REDCREST, but in many ways serves as the culmination of seven months of competition that started in late January, when Bass Pro Shops founder Johnny Morris made the ceremonial first cast at the inaugural MLF Bass Pro Tour event in Kissimmee, Florida.

One of the field of 10 anglers leaves La Crosse, Wisconsin with a $300,000 payday and the very first REDCREST trophy, a historic end to a historic season. Here are the 10 MLF pros who you’ll see battle it out in this Satuday’s episode. Ding … ding.

“The Rooster” had plenty to crow about during his Shotgun, Elimination and Knockout Rounds on Pool 8 of the Upper Mississippi, stacking 162 pounds, 5 ounces of bass on SCORETRACKER® in his three rounds, the most of the entire 30-man field. Vinson improved each day, starting with 48-7 in Round 1 and winning his Knockout Round with 63-10.

The Oklahoma pro made it known immediately that he would be a handful at REDCREST, starting the Shotgun Round with 81-15 on 69 fish, the most productive day of the first four qualifying rounds. He eased into the final round with nearly 60 pounds in Knockout competition.

Hackney finds himself trending strongly in the right direction as the Championship Round begins: the 2018 World Champion hovered in the middle of the pack through the first two days on Pool 8, and then put his foot on the gas pedal in the Knockout Round with 71-11 on 42 fish.

The East Tennessee pro was the model of consistency throughout the Bass Pro Tour regular season, and continued to produce in REDCREST: Neal put up 82-7 in the first two rounds combined, and easily made the finals with 60-4 in the Knockout Round.

“Boom Boom” finished the regular season with a flourish, racking up three Top 12s in the final four events of the year and catapulting himself up the points standings. He scrapped his way into the REDCREST championship, recovering from a 15-pound day in the Elimination Round with a 55-pound performance in his Knockout Round.

The winner of Bass Pro Tour Stage Three, Powroznik lurked in the middle of the pack the first two rounds of REDCREST, and then carved a spot into the Championship Round fishing heavy vegetation on the lower end of Pool 8 to the tune of 53-13 in the qualifying round.

The California pro also entered REDCREST with the momentum of recent success: he finished in the Top 10 in two of the final four regular-season events of 2019. Ehrler was extremely consistent in the first three rounds, putting 53-4, 42-14 and 54-9 on SCORETRACKER® in Shotgun, Elimination and Knockout competition.

Iaconelli took his “fish the moment” mantra to heart through the first three rounds, weighing 91-6 in the first two rounds on 58 fish, and then connecting with 35 fish for 51-7 in the Knockout Round to advance to his third Championship Round in 2019.

Evers proved himself to be the man to beat early in the 2019 season with four Top 10 finishes in the first four events of the regular season, eventually claiming the first-ever Points Championship. The Oklahoma pro ended up battling his way into the REDCREST finals by just over a pound, finishing the Knockout Round with 46-10.

The Idaho pro started REDCREST strong with 51-0 before backing off in the Elimination Round to look for new spots and patterns. He secured the final spot in the Championship Round with a 48-pound day in his Knockout Round.

Major League Fishing’s REDCREST Championship Round Presented by Venmo premieres Saturday, Dec. 28 on Discovery. Viewers on both the East and West coasts (Eastern and Pacific time zones) can watch the episode premiere from 7 to 9 a.m.