STAGE ONE 2020: Records May Fall When Bass Pro Tour Kicks Off Season On Lake Eufaula 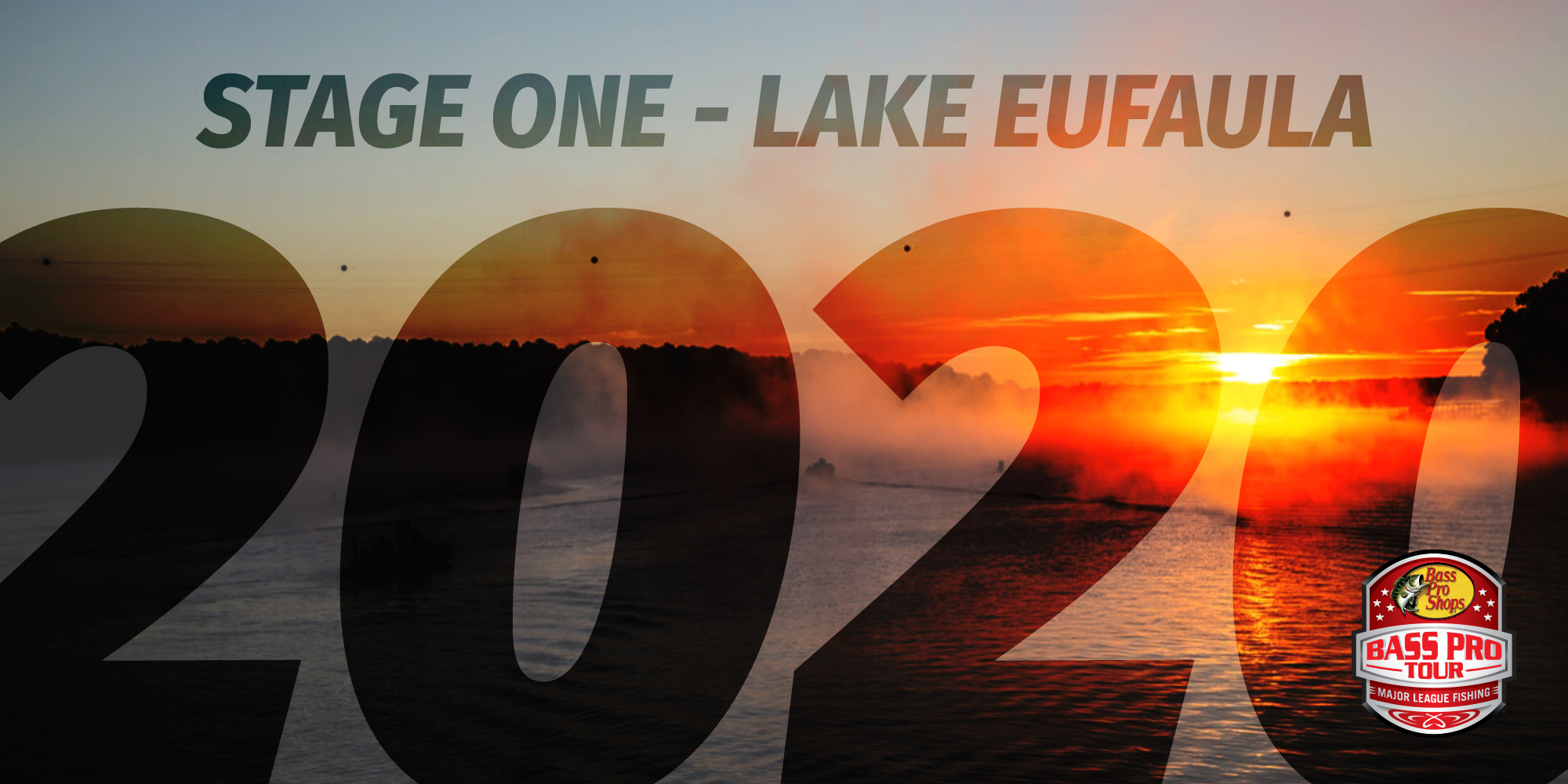 The 2020 Bass Pro Tour season kicks off at Lake Eufaula, one of the hottest-trending fisheries in the country.

EUFAULA, Ala. – If you’re a bass angler who appreciates diversity, there’s a lot to love about Lake Eufaula, Alabama. And if you’re one of the 80 MLF pros making pre-season tackle checklists for the kickoff of the 2020 Bass Pro Tour Season (Feb. 7-12) on this Alabama/Georgia border water, prepare to pack heavy.

Whether you like to crank ledges, flip mats, wind a spinnerbait over offshore brush or run the bank with a swim jig, there’s a section on Eufaula to do it in, and a better-than-average chance that several 3- to 8-pound Chattahoochee River largemouth will bite.

“Lake Eufaula has just an unbelievable amount of habitat,” says Alabama pro Russ Lane. “It fishes extremely big: I wouldn’t consider there to be much dead water on that lake, so we’re really going to be able to spread out. And it’s a lake on a (positive) trend right now. The last few springs, it’s fished really good, with quite a few 30-pound bags in five-fish tournaments.”

Lane’s assessment of Eufaula’s strong upward trend is supported by some impressive raw numbers from recent tournaments held there.

It took 98.7 pounds for FLW veteran Brian New to win the 2019 ABA Ray Scott Championship there in early April, in a five-fish format tournament where his average fish was 4.9 pounds and his biggest was 8.8 pounds. The second-place finisher, Big Bite Baits owner Scott Montgomery, weighed in just under 91 pounds.

Even more impressive: a local five-fish tournament in February of 2018 took 32 pounds to win (a 6.4-pound average).

According to Montgomery – a lifetime resident of the Eufaula area – the lake is on such a strong positive surge that MLF records will be shattered if the conditions are right in southeast Alabama when Bass Pro Tour Stage One arrives in early February.

“I’d expect the biggest weights (MLF) has put up so far when y’all show up here,” Montgomery said. “There have been times on this lake where you could get on a certain spot that’s really loaded up and catch 100 fish in an hour. You’re going to see a lot of 6- and 7-pounders caught, a few 8s and 9s, and maybe some 10s. If somebody lands on one of those spots where there’s a school of fish 100 yards long like Kentucky Lake, you’re not going to believe the numbers you’ll see.”

Eufaula is a “New Old Lake”

With just over 640 miles of shoreline and several different types of cover and structure in the 85 miles between Walter F. George Dam and the upper reaches of the river, Eufaula is – as MLF pro Gary Klein describes it – “several lakes within a lake.” It was one of the hotbeds of tournament bass fishing from the late 1980s to the early 2000s, and has long been revered one of the best offshore-ledge/channel fisheries in the country.

A handful of Bass Pro Tour veterans have enjoyed success there: Edwin Evers won an Alabama Tour event on Eufaula cranking a squarebill in 2003; Klein won an Alabama Tour event there in 1993 fishing river channels; Randall Tharp claimed an FLW Costa Series win there in 2008; Wesley Strader, Shin Fukae, Zack Birge and Adrian Avena all finished in the Top 10 when the FLW Tour stopped on Eufaula in 2015.

But as Klein also points out, the Lake Eufaula of 2019-20 is a different – and likely better – fishery than it was in the mid-2000s (and certainly different than the 1980s and 90s), thanks to the proliferation of hydrilla and milfoil that started in 2016.

“Hydrilla developed a few years ago in places you’d never seen it before, and I think the bait fish really came on strong because of it,” Montgomery said. “The hurricane this summer did a pretty good job on the grass – the waves were so big they just ripped the grass out of the bottom. That moved the fish back onto the places where they used to be, when Eufaula was known many for its ledge fishing.

“But the fish have done as well as they have because of the grass. I thought that maybe it would fade a little after all the tournament pressure and the great spring we just had, but I was just out there this week and it’s fishing as good as it ever did.”

So who might have a head start come Day 1 of the 2020 Bass Pro Tour opener? According to Lane, the timing of the event and the position of fish relative to spawn – combined with Eufaula’s top-to-bottom productivity – makes it an even playing field.

“I think we’ll have guys catching them deep, we’ll have guys catching them ultra-shallow, and in just about every depth in between,” Lane said. “I really don’t think there’s any way to forecast who will win that tournament, just because there are so many ways to catch them there and so many areas of the lake with good populations of fish. You can flip shallow in the lower end and catch ‘em, you can go out on a ledge or brush pile and catch ‘em, you can run all the way up the river and catch ‘em. That’s the neat thing to me about an event on Eufaula in early February: it’s anybody’s game.”

It’s an assessment that Montgomery agrees with…but with a little heavier lean toward the ledge specialists.

“I think a lot of different guys could win, but whoever is an extremely good ledge fisherman could dominate,” he said. “There’ll be some fish shallow, but you’ll be here before the fish move completely up shallow. Most of them will still be offshore, waiting, and that’s a situation where ledge fishing will dominate. And if you hit it during a cold front and it fishes tough, that still favors the ledge guys more than it does guys fishing shallow.”