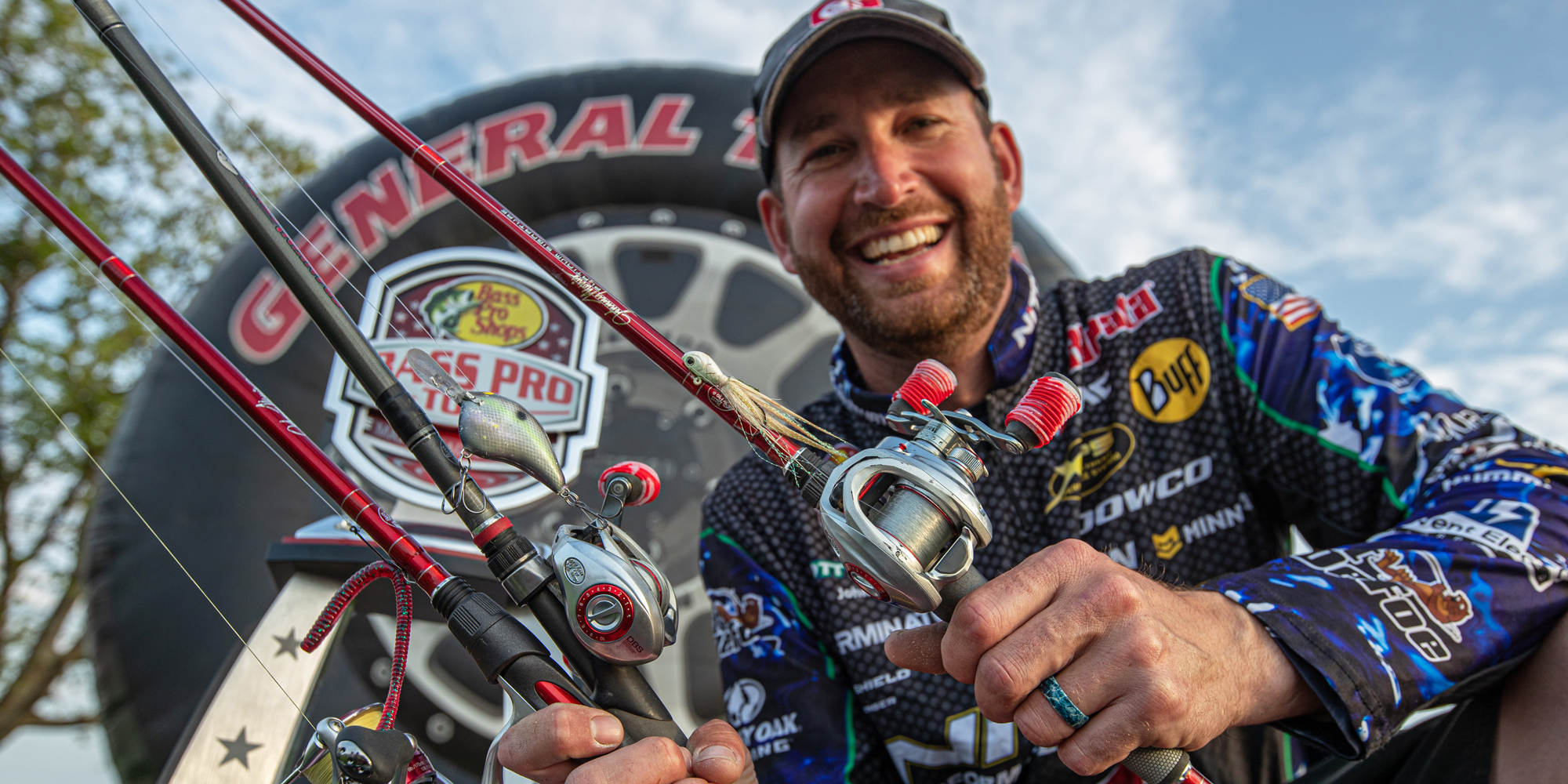 Ott DeFoe shows off the tools of the trade he used in his win in Stage Three. Photo by Josh Gassmann

LAKE FORK, Texas – Lake Fork and Lake Athens in East Central Texas – the site of General Tire Stage Three Presented by TrueTimber – proved to be big-bass bonanzas. With two 10-pounders showing up, a handful of 9-pounders making their presence known, and 5-pounders seemingly nothing special (we all know they still are), it was a bass angler’s dream.

Ott DeFoe won on the final day in commanding fashion, weighing in 69 pounds, 12 ounces to beat his closest competitor, Alton Jones, Jr., by over 28 pounds.

Here are the baits the Top 10 used to get to the final, and what they fished during the Championship Round.

In order to make it into the Championship Round for his epic beatdown of his challengers, DeFoe fished Lake Fork with a Bass Pro Fin-Eke Worm rigged wacky-style using a No. 1 weedless VMC Neko Hook. DeFoe also used a 4-inch swimbait fished on a VMC Tokyo Rig with a 5/0 wide gap hook and a 1/4-ounce Swagger Tungsten Weight. The wacky rig was fished on 10-pound Bass Pro Shop Hyper Braid with a 12-pound XPS Fluorocarbon leader. For the Tokyo Rig, DeFoe used a 40-pound braid and a 17-pound fluorocarbon leader. All rods and reels were Bass Pro Shops models.

“All the fish I caught on Fork were up shallow spawning. I could see some and others I just caught casting to the cove,” he said.

For Athens, DeFoe weighed fish on several baits, including a swimbait, a couple on suspending jerkbait, three on VMC Neko Rig.

But DeFoe’s three primary lures, especially productive during his decisive fish-catching frenzy in the final period, were a 3/8-bucktail jig, a finesse wakebait, and a Rapala DT-10 in a new color premiering this year at ICAST,  Bigg Shad (a natural, muted shad). They were fished around a bridge in 8 to 12 feet of water.

“One of my biggest keys to success was my Humminbird,” says DeFoe. “Idling under the bridge where I caught the winning fish, I saw them on my Helix 12 Mega with Side Imaging. When I saw those fish, I knew I could win. The only reason I stopped to fish the bridge is that I saw them.

“I cast my DT 10 and could feel the bait bouncing off the fish. I didn’t know if they were bass. It took four casts before I caught one. Then it was on like Donkey Kong.”

On Lake Fork, Jones used a 6-inch YUM Dinger in green pumpkin/purple and a Booyah Pad Crasher in the Shad Frog color. Both were fished in shallow spawning areas around grass, wood, and docks. Main lake pockets were vital.

For Lake Athens, Jones switched things up a bit.

“I started the day trying to sight fish and caught several bass on a 5-inch wacky-rigged Dinger in green pumpkin/purple, casting at beds from a distance,” he said. “When that wasn’t panning out I switched to outside grass lines. I was able to stay right on the edge of the eelgrass by using my Garmin Live Scope, and then I was using a 1/2-ounce white vibrating jig with a YUM 3.5 inch Pulse on the back in Phantom Shad.”

Daniels fished a handful of baits on Lake Fork. A key offering was a prototype flipping craw from Z-Man in green pumpkin that he’d flip into bushes. The other major player was a Merthiolate-colored floating worm fished in shallow grass, targeting holes and pockets. A few essential bass were also caught using a red craw-colored 1/2-ounce Rat-L-Trap.

Athens was almost all the Merthiolate worm, with a couple on a drop-shot and another on a creature bait. All fish were caught in shallow grass pockets.

“I went old school with the floating worm,” said Daniels, Jr. “It’s a technique many of us have gotten away from, but it works well when the bass are up in the shallow grass.”

Chapman’s key baits for Lake Fork were a 3/8-ounce bladed jig in white or black and blue fished with 20-pound Gamma Fluorocarbon on a 7-foot 3-inch KastKing rod and 6.4:1 reel.

He also flipped a 4-inch black and blue craw.

Chapman used the same baits at Athens, but caught his biggest fish on black-and-gold jerkbait.

All of his fish were caught in 5 foot of water or less targeting vegetation such as reeds, hydrilla, or coontail.

Crankbaits were crucial for Coulter on Fork. A Rapala DT-10 in shad and chartreuse, and a Norman DD 22 in a shad pattern. A bucktail jig and a Carolina rig also caught a couple, but cranking was key.

“I had two offshore spots on Lake Fork,” Coulter said. “One in 10 feet of water, the other in 16. I was targeting spawning coves. I fished on nondescript round, subtle points that people just didn’t fish, using the Lowrance SideScan to find fish in little ditches. They had a structural feature on them, like a rockpile or something that stood out, they were hard to see. The fish were coming and going. I’d say 90 percent were pre-spawn and some post-spawn.

“The moderate action acts like a shock absorber and just lands more fish,” he said. “The older I get, the more I realize this.”

On Athens, Coulter used a black-and-blue Savage Gear Armor Tube Worm fished wacky style. This worm has a little piece of mesh built into it, so you don’t need to use a washer to fish it, and it also doesn’t tear as easily as most stick worms do.

Poche targeted bedding fish on small main-lake pockets on Lake Fork with a Berkley Rocket Craw in white, and a Berkley General in black and blue.

His Athens approach was similar. Poche fished spawning and schooling fish in the back of creeks with a 3-inch Berkley Pit Boss in green pumpkin, and a Berkley Juke.

For Athens, the South Carolina pro fished around reeds with a Strike King Thunder Cricket in green pumpkin.

Atkins primarily sight-fished on both lakes with a Blue Sapphire Berkley Chigger Craw, a 5.25 black-and-blue Berkley General, and a 6.25 green pumpkin Berkley Bottom Hopper. Prime targets were laydowns and bullrushes. He focused on the West Arm of Lake Fork to qualify for the Championship Round and credits Costa Del Mar Sunrise Silver glasses for helping him see the bass.