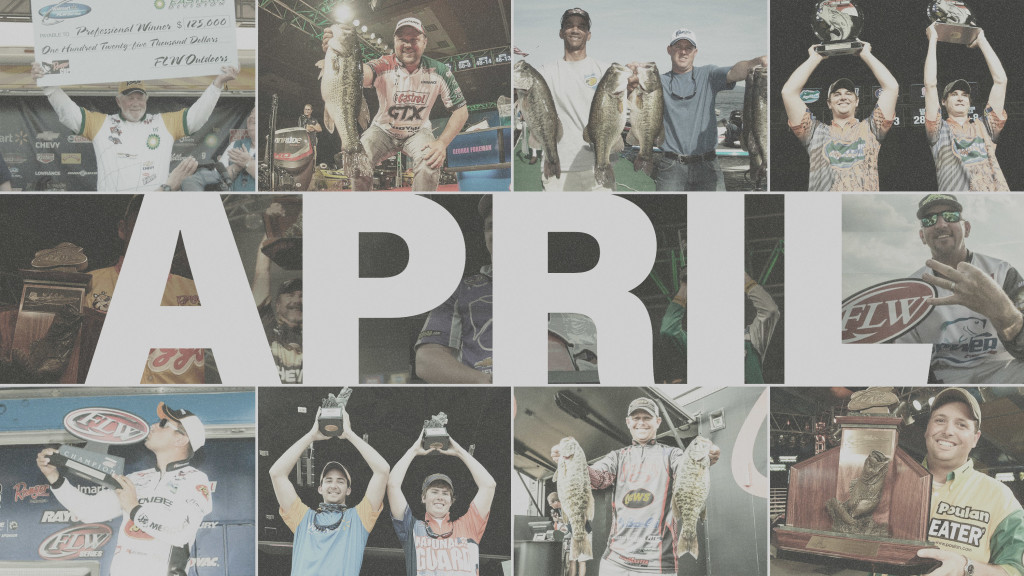 Spring is usually a busy time for casual and tournament anglers alike, though this April will likely be a little different with major tournaments postponed for the time being due to the COVID-19 outbreak. That’s why we figured we’d help with tournament withdrawal by taking a trip down memory lane, straight from the FLW archives, remembering past tournaments we’ve held in the months of April past.

From 1995 to 2019, FLW held nearly 580 tournaments in April across all levels of competition. With so many tournament memories to sort through – from wins to tournament firsts and cool fish catches – here are a handful of the most memorable things to happen over the years in the month of April. 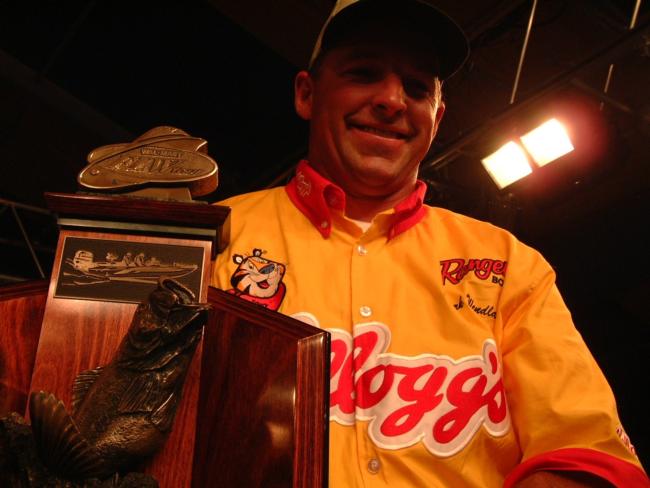 With the former FLW Tour visiting Beaver Lake regularly over the last two decades, it only makes sense that we’d kick things off on the White River impoundment.

In 1999, Clark Wendlandt won his first-ever major title on Beaver Lake doing what he does best: sight-fishing. After making a top 10 there in 2000, he’d sight-fish his was back to the top in 2001 and rightfully earn the title of Mr. Beaver Lake. And while he’s added some other trophies to his mantle since then, his dominance on the Arkansas reservoir was undeniably impressive. 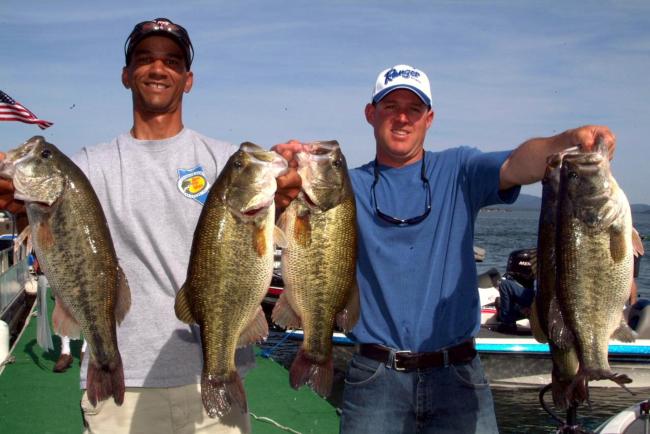 Back in 2007, the Toyota Series Western Division headed to Clear Lake for an absolute smashfest. Back then, the tournaments lasted four days instead of three, but it didn’t make the average weights any less impressive.

Jared Stone earned the win with 99 pounds, 14 ounces total and only won by 4 ounces. Tenth place was 84-9, with the top eight places all weighing in over 90 pounds. Stone did most of his damage with a 7-inch Osprey swimbait he fished around docks, but had to use a 6-inch Roboworm on a drop-shot to catch spawning fish on the final day for his smallest limit of the week – 18-15. Safe to say Clear Lake showed out that week. 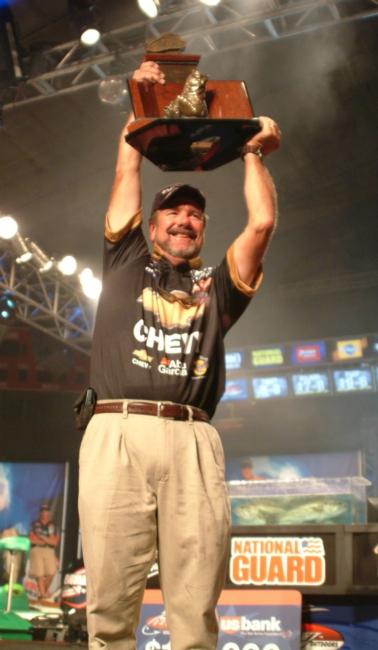 Also in 2007, Larry Nixon locked up his third FLW Tour victory, which came on Lake Norman.

The General did it with the help of a spinning rod and a shaky head, and the win helped reinforce that he could still hang with some of the newer faces of the sport like Bryan Thrift, Michael Bennett and Hank Cherry – who all finished in the top 10. Since then, he won the 2012 Tour event on St. Clair and is looking forward to being back out on the Tackle Warehouse Pro Circuit in search of another win by June after recovering from shoulder surgery this past winter. 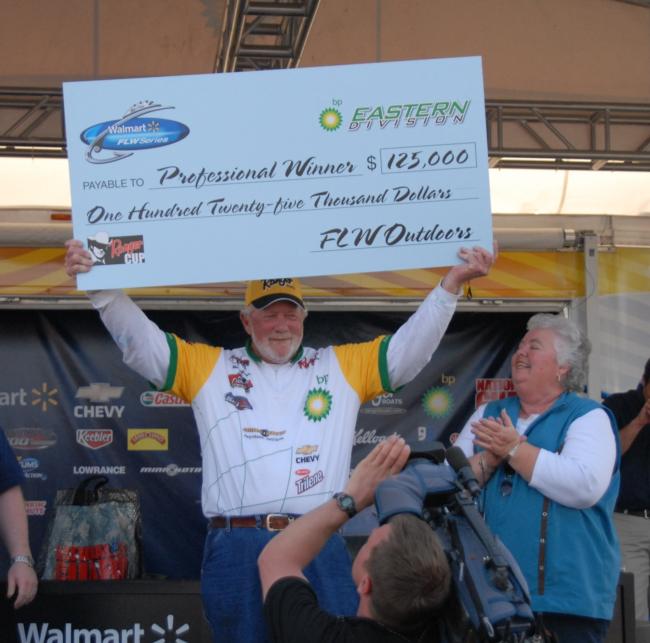 At the age of 62, Guido Hibdon dominated on Lake Eufaula in 2009 during his second Toyota Series Eastern Division title. Targeting seawalls and rock, Hibdon fished painfully slow with a Carolina rig, jig and crankbait, oftentimes having to make 50 casts at the same rock before he’d get bit. In doing so, he caught 83-9 over four days for the $125,000 payday.

Another cool aspect of the event was that his son, Dion, finished the event in 10th. Also of note, Guido taught some of the young pups (his affectionate term for his competition) in the sport like Scott Martin, Glenn Browne, Ott DeFoe, JT Kenney, and Randall Tharp (all of whom finished in the top 10) a thing or two about fishing slow and with persistence during that tournament. They seem to have put it to good use throughout their respective careers. 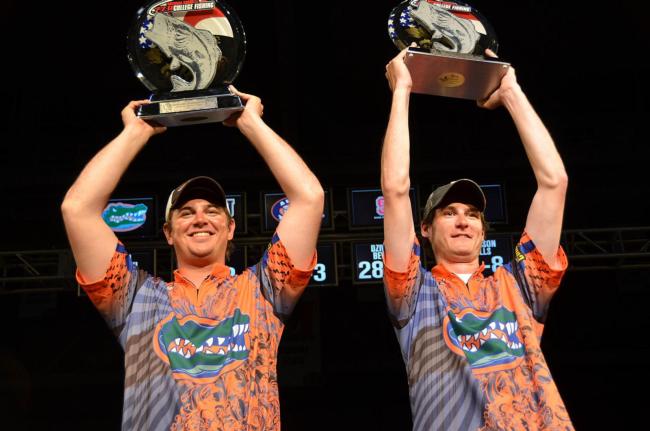 The inaugural FLW College Fishing National Championship was held back in 2010 on Fort Louden. The University of Florida squad of Jake Gipson and Matt Wercinski locked up the title and the $100,000 prize that came with it in what they thought was a once-in-a-lifetime achievement.

Fast-forward to the 2011 National Championship on Kentucky Lake and again, Gipson and Wercinski were hoisting the trophies when the dust settled. Since then, there have been schools that have gone on dominating runs, but none have been quite as impressive as what the Gators pulled off to start the championship era. 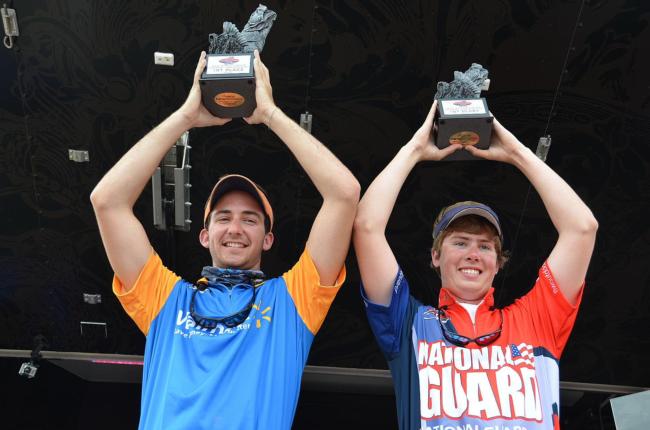 With college fishing heating up, it only made sense that high school fishing would get its turn at hosting a national championship. In 2012, that became reality when the first ever The Bass Federation and FLW High School Fishing National Championship was held on Lake Murray. Dalton Anderson and Dawson Lenz of McIntosh High earned the title in the one-day event with 16-12, winning by over 8 pounds. In doing so, they each took home $5,000 in scholarship money. 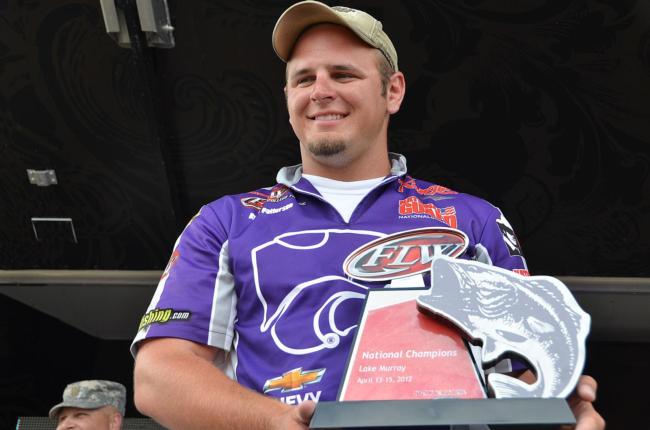 Held on Lake Murray at the same time as the High School National Championship, the 2012 College Fishing National Championship was also something new. Aside from the fact the University of Florida did not win it, Kansas State University’s Ryan Patterson won the thing fishing solo. Due to eligibility issues, his brother and partner, Brandon, wasn’t allowed to fish, per championship rules, which left Ryan to do the heavy lifting. Targeting saddles on the backs of main-lake islands and isolated cover on barren points with a combination of YUM Money Minnows, Zoom Super Salty Flukes and Megabass jerkbaits helped Ryan haul in 46-15 over three days and beat some impressive talent, including the Auburn University duo of Matt Lee and Jordan Lee. 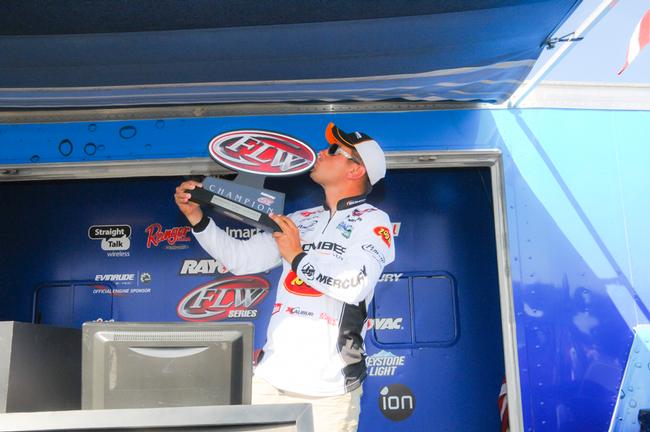 Lake Guntersville has a knack for producing victories in impressive fashions, and April of 2014 was no different. Among a stacked top 10, Jonathan Henry came from ninth to first on the final day thanks to a 30-14 limit to win the Toyota Series Southeastern Division event.

Blowing by Mark Rose, Bryan Thrift, Michael Neal and Ron Nelson, Henry leaned on his local knowledge (being a full-time guide on Guntersville) and did most of his work with a 6-inch Scottsboro Tackle swimbait thrown around the famous bridges on the lake.

Henry eventually worked his way up to fishing the Tour in 2017, despite battling cancer, and sadly passed away last June at the age of 36. 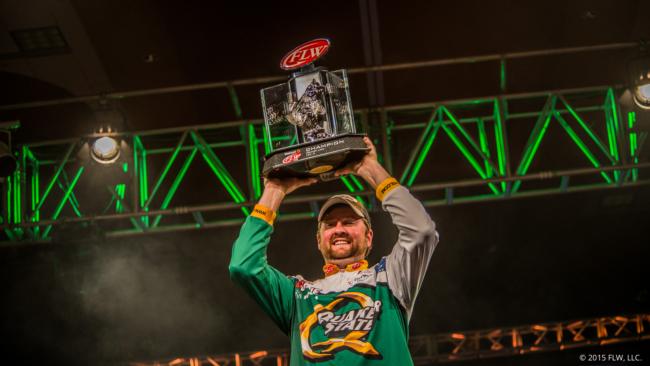 To say Matt Arey is dialed on Beaver Lake in April would be an understatement. In 2014, Arey grabbed his first win at the top level of the sport and did it on Beaver Lake, and he liked the feeling so much that he went ahead and did it again in 2015 on the same pond. With a few other top-10 showings on Beaver before his first win, it only seems right that the crown of Mr. Beaver Lake be passed to Arey.

Aside from the fact that those two wins helped solidify Arey as a competitor at the tour level, his second win also supplied the sport with one of the cooler fish catches FLW has captured on camera. En route to weighing the biggest limit of the event on the final day (17-13), Arey was reeling his swimbait back from a dock when a 5-pounder chased it to the boat. After pulling the bait alongside the boat with no room left to reel, the fish bit, and Arey promptly flipped it in the boat.

You can watch the catch here. 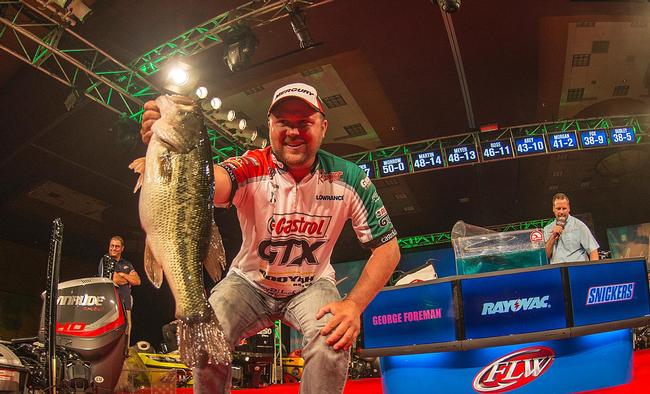 David Dudley has had some interesting fish catches over his career, no doubt, but Beaver Lake has had a history of making dive in for some key fish. For example, when he won on Beaver in 2012, Dudley hooked a nice spotted bass that got wrapped around the branch of a cedar tree. Not willing to lose the fish, Dudley dunked his head underwater with his waist balancing on the boat in order to land the fish. Jump ahead a few years and almost the same thing happened, though he didn’t have to dive quite as deep the second time around. 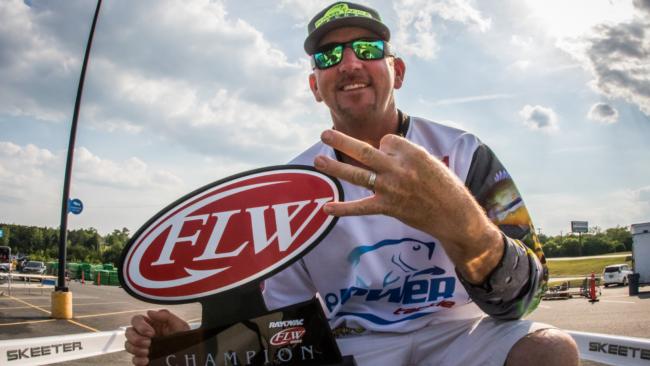 After winning the season opener of the 2015 Toyota Series Southwestern Division on Lake Amistad, Ray Hanselman wasn’t done yet – by a long shot. He’d roll to Sam Rayburn in early April and sack 60-8 to win his second title that season. As if that wasn’t enough, the third and final event of the season would kick off a few weeks later at the end of April on Lake Texoma, and, once again, Hanselman would stand tall at the end. It was truly one of the most impressive feats of dominance ever witnessed in the sport. Of course, he didn’t stop there, as he’d end up winning the Series championship that fall on the Ohio River. A perfect 4-for4 in the Series that year on a run that really heated up in the month of April. 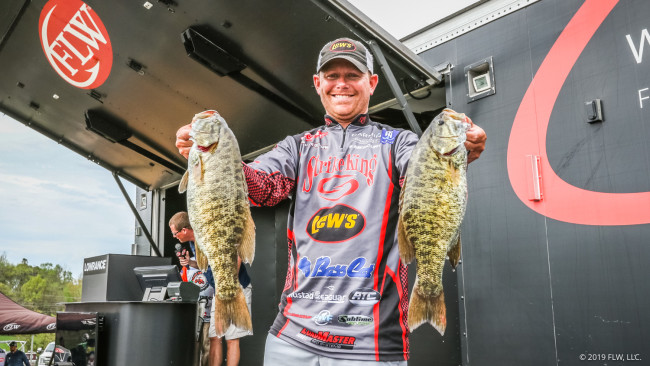 New lakes are always exciting to visit, and when you go there during the heart of the spawn, you can’t help but be in for a treat. That’s exactly what happened when the Tour rolled into Jefferson City, Tenn., last April for a springtime showdown on Lake Cherokee. It seemed almost impossible to not see a pro catch a fish at any given moment. And while Andrew Upshaw locked up his first win at the tour level, barely edging out Grae Buck, there wasn’t a pro in the field who was disappointed with how that played out.

To look back at all the action, check the links below.

Buck goes for a swim 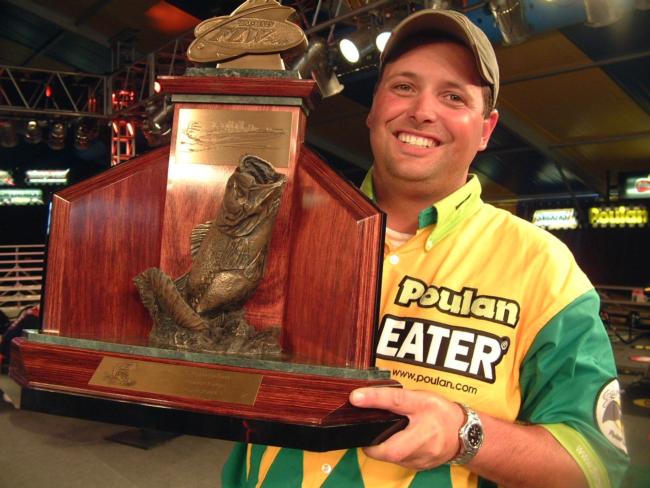 We can’t end the list without coming back to Beaver Lake for one more mention. Since it was such a staple fishery for the Tour, there are too many memories to count, and though the fishing wasn’t always a heavyweight throwdown throughout history, there were some serious hammers who claimed Tour titles on the White River impoundment.