Three for 16-6 does it for Elizabethtown High School duo 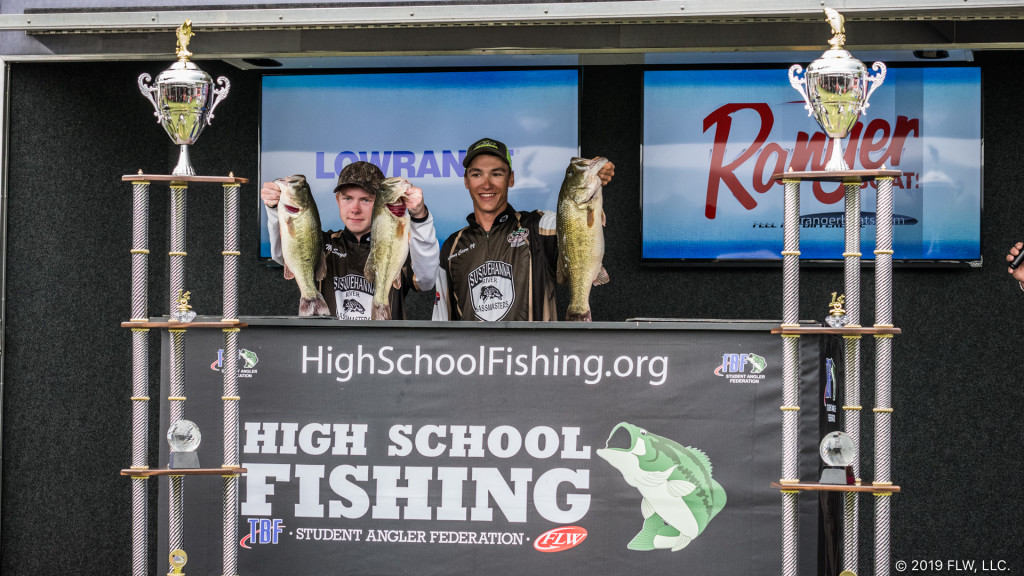 Anthony Cicero IV and Dakota Snyder went right to their spot, locked up a big limit early and about six and a half hours later, brought what would be the winning sack of 16 pounds, 6 ounces to McFarland Park where the Elizabethtown High School duo won the 10th Annual High School Fishing World Finals.

Presented by The Bass Federation and FLW, this four-day event was held in conjunction with the High School Fishing National Championship, which concluded yesterday. Northlake Christian High School’s Christopher Capdeboscq and Sam Acosta won that event with a three-day total of 35 pounds, 12 ounces. The last day of the World finals featured weights that were zeroed and a three-fish limit.

While many of their competitors opted for Pickwick’s traditional offshore ledge game, the winning anglers quickly determined that their best opportunities would be found shallower.

“We went offshore for like an hour and 15 minutes in practice and found a nice school of bass, but we couldn’t catch anything,” Cicero says. “We finally caught a 14-inch crappie and we were like ‘This is stupid. We’re done.’”

Working in the Mulberry Creek area, upriver from Kroger Island, Cicero and Snyder focused on shallow grass with wood and caught fish from 8 inches of water to five feet. They had plenty of area at their disposal, but ended up sealing the deal on a single piece of cover.

“We were fishing this stump where we had caught a couple in practice and we caught our three best fish there today and ended it all,” Cicero says.

Anchoring their sack was a 7-7 toad that earned Big Bass honors for the day.

Snyder notes that he and Cicero experienced their best bites this week during the morning hours and during overcast conditions. Unsurprisingly, today’s mostly cloudy conditions favored their bite.

“In the morning, we would burn it right above the grass and later in the day we would slow roll it to get it down deeper in the grass,” Cicero says.

For their victory, Cicero and Snyder won their choice of scholarship offers from Bethel University (Tennessee), Simpson University (California) or Kentucky Christian University. Snyder says he plans on joining the United States Marines after his upcoming senior year, while Cicero says the victory will have a life-changing impact on his future. 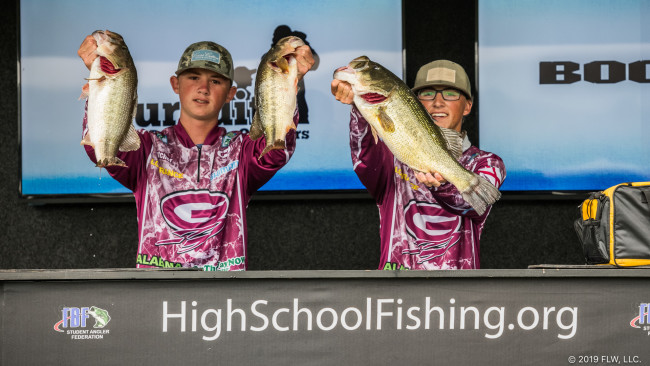 Catching the event’s second-biggest bass (behind Cicero and Snyder’s 7-7) buoyed brothers Griffin and Fletcher Phillips of Gardendale High School to a second-place finish with 14-13. Griffin says that catching the 7-pound, 1-ounce fish was their reward for believing in a key spot.

“We had a grass line in deep where we had gotten a few big bites in practice when it was overcast, but because it was sunny when we blasted off, we didn’t think we could get bit so we didn’t stop there,” he says. “But as we were heading back in this afternoon, our dad (their boat captain) said ‘You have enough time, you can stop on it.’

“We pull up, I make three casts with a 1 1/4-ounce white/chartreuse spinnerbait with gold willow-leaf blades, hook that big fish and I was like ‘This is the one we need.’ We had a decent bag that was about 10 pounds, but that fish helped out our bag a whole lot.”

Earlier in the day, Fletcher had caught a 5-pounder on a 3/4-ounce Buckeye Lures Mop Jig in the fall craw color with Yamamoto Swim Senko trailer. Slow crawling the jig through a rocky canal in Yellow Creek that was 20 feet deep fooled their second biggest fish.

“Sticking with it was the key for us,” Fletcher says. “We didn’t do very good the first day, but we knew we were on the fish to (potentially) win it, so we just kept trying.”

Griffin says the bites didn’t come easy any of the days. 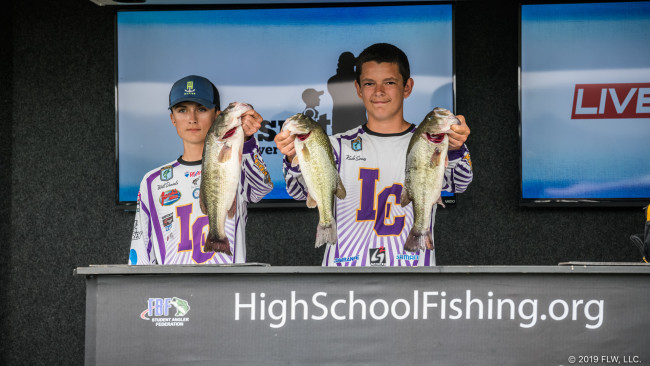 A blistering start found them culling 20 minutes into their morning, but Will Daniels and Kade Suratt of Lawrence County High School eventually saw their fast-and-furious productivity diminish into a grinding search for upgrades. After posting the event’s heaviest bag — 17-1 — on day three, Daniels and Suratt ended their campaign with a solid effort of 13-3.

The Lawrence County anglers were one of the few teams that turned left out of McFarland Park Marina and ran upriver to fish rock and wood banks within about a mile of the Wilson Dam. Targeting areas where eddies gathered baitfish, they were casting long before most competitors running downriver made their first stop.

“Being there early and being able to get on our spots was what we needed,” Suratt says.

Suratt threw a 1/2-ounce shaky head with a 10-inch Strike King Bull Worm in red bug. A slow, meticulous retrieve in which he often held the bait still to let the current impart action was most productive.

Daniels threw a 1/2-ounce Scrounger with a Jenko Booty Shaker swimbait in a shad color.

“That Scrounger put more wobble into the bait and the fish seem to like it better,” he says. 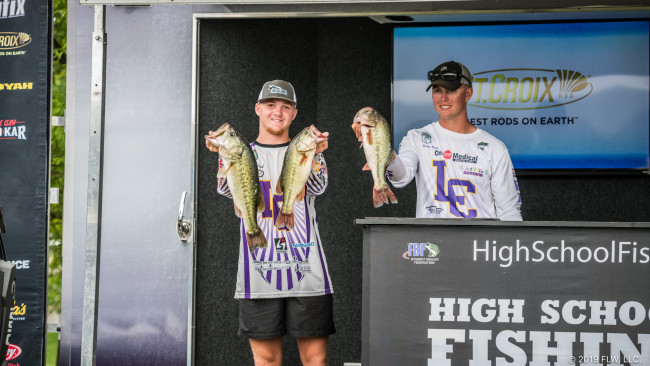 Consistency is key in competitive fishing and Lawrence County High School’s J.D. Bedford and Walker Brown proved theirs in impressive fashion, en route to a fourth-place finish with 12-10. First, the duo won this event in 2016, so making it back to the final round was gratifying, Brown says. Moreover, the duo also placed fourth in yesterday’s High School Fishing National Championship finals.

“This is our home lake and we came down here to win, but our goal was to make the National Championship cut and we did that, so to finish fourth in the World Finals feels good,” Brown says.

The anglers caught their fish on a drop-shot with a 6-inch Roboworm Straight Tail Worm in the morning dawn color and Carolina rigs with Zoom Z-Craws and Brush Hogs, both in green pumpkin.

“We just tried to show the fish different looks with a power fishing technique and a finesse technique,” Bedford says.

The anglers rotated between two different offshore spots and a final visit to their better one yielded a 5-pound kicker. 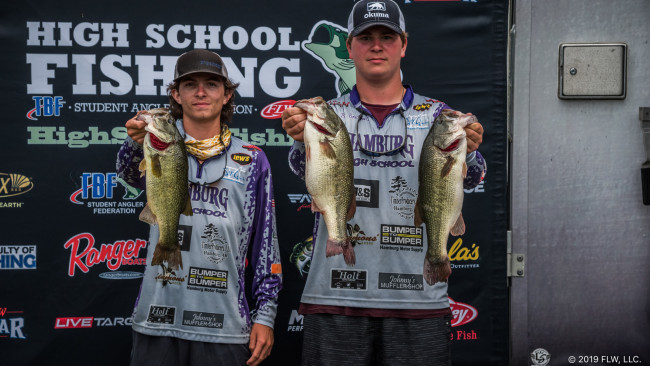 Hamburg High School’s Austin Flemming and Ben Brockwell spent their day in shallow water and caught a fifth-place limit that weighed 12-5. Texas-rigged creature baits were the most productive for them.

“We were just flipping the bank, brush piles, logs and doing the best we could to find bigger bites,” Flemming says. “We ran down to the Pickwick Dam but we could only catch small fish, so we decided to come back to the mid-lake area and fish shallow.”

Brockwell notes that he and Flemming worked down-current most of the day to cover water, but later switched to an up-current progression to slowly pick apart the cover.