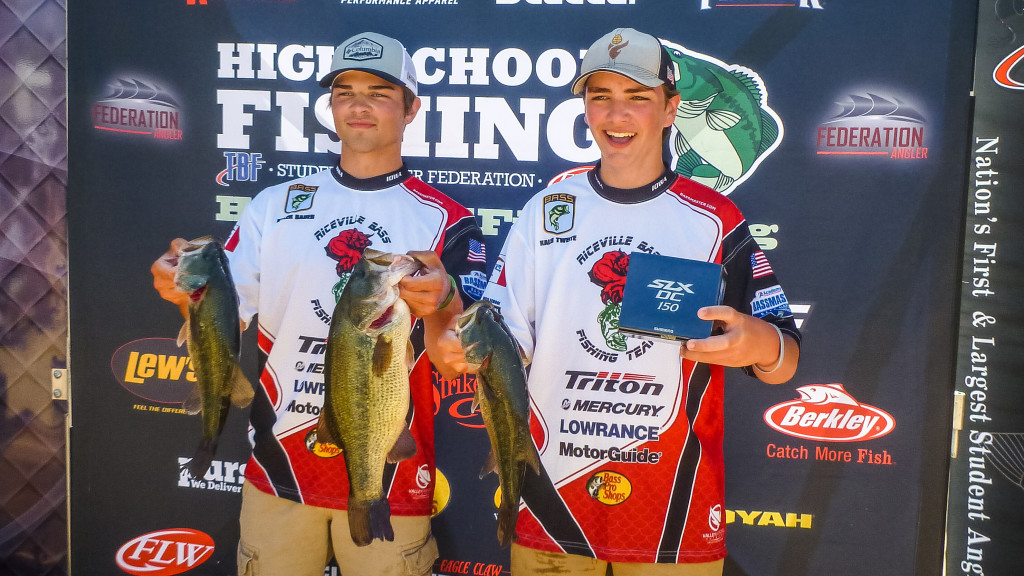 Fog followed by high skies greeted the participants for day two of the Student Angler Federation High School Fishing National Championship, June 24-26, 2020, on the Mississippi River out of La Crosse, Wis. The thick fog early on created a three-hour delay for all participants, and the bright, still skies changed fishing patterns.

Ten teams shined through the interruption and weather, however, to put them in place to fish the third and final day.

And here’s some of what the top five had to say.

In the lead is the team of Lawson Losee and Kooper Tweite, of Riceville High School in Ricevill, Iowa. The anglers weighed three fish for 10.06 pounds, which, when added to their day-one weight of 8.12 pounds, brings them to a total of 19.02 pounds.

“We only got to fish for an hour because of the delay, which is OK because all our fish came within the first 20 minutes,” the Losee says.

Getting away from the crowd was their key to catching success. 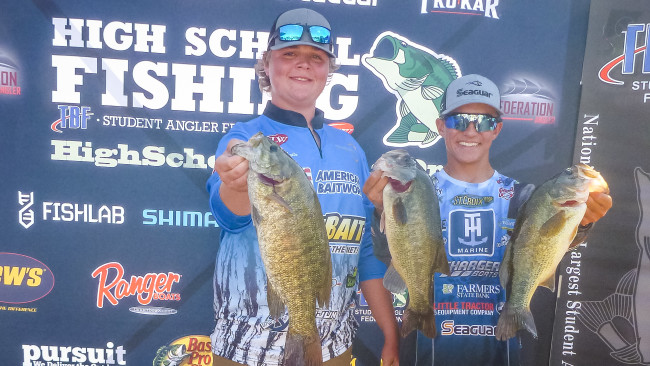 Illinois Student Angler Federation’s Trey McKinney and Zachary Martin are in second place because of their 10.7-pound catch, which added to day one’s 7.10 catch brings them to 18.01 for a two-day total.

Their four-hour day started out slow. With only one small smallmouth in the livewell, they ran to another spot and landed 20. And it wasn’t until late in the day they caught all their bigger fish to cull.

“They are so different than what we fish at home,” says McKinney. “We just change baits a lot, and start casting to whatever looks good.” 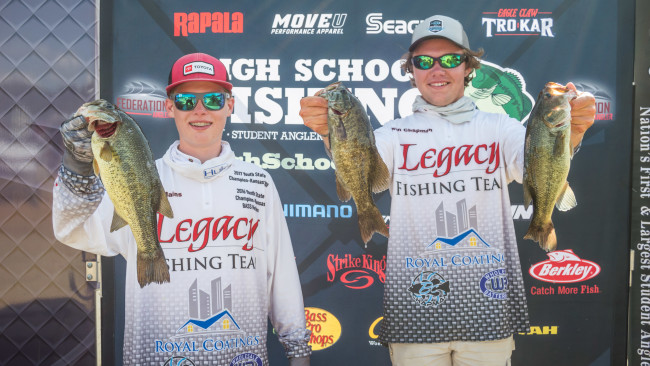 While their 6.4-pound catch was the average of most tournament goers, it was enough to put Ryder Mains and Mason Chapman, fishing for Legacy Christian Academy in Lenexa, Kan., in third place when coupled with day one’s 11.11 weight, for a total of 17.15 pounds.

“We’re going to try and go right back to where we were yesterday,” Mains says, “and the bite should be better because of the storms moving through later.”

The late start, barges and a broken-down lock had the pair fishing Pool 8 rather than Pool 7, where the day-one leaders had hoped to reach. They had five hours to fish after the late start.

Ransom Boone and Russell Moore fish for the Madison Patriots. With six hours to fish, they were able to put 8.07 pounds in the boat for a two-day total of 17.12 pounds and fourth place.

“We’ve been finding our fish in shallow water with current,” Boone says. “And we caught fish all day long, with our biggest landed an hour before heading back.”

Even with the delay, the team was able to make a long run, getting back to the area it fished the day before.

In fifth place is Joshua Buller and Conner Chase, fishing for the Thurston Colts. Their three-fish total weight along with day one’s catch of 8.06 pounds gives them a total of 17.11 pounds.

“We’re pretty confident in our spots for tomorrow,” says Buller. “We caught a lot of smallmouth, with 15 keepers when mixed with a few largemouth.”

The crew plans on using the same ploy for day three, looking for medium depths with current.

The High School Fishing National Championship is a three-day event that runs concurrently with the High School Fishing World Finals. More than 300 teams are competing in the World Finals, with 194 of them simultaneously competing in the National Championship. More than $3 million worth of scholarships and prizes are on the line this week.