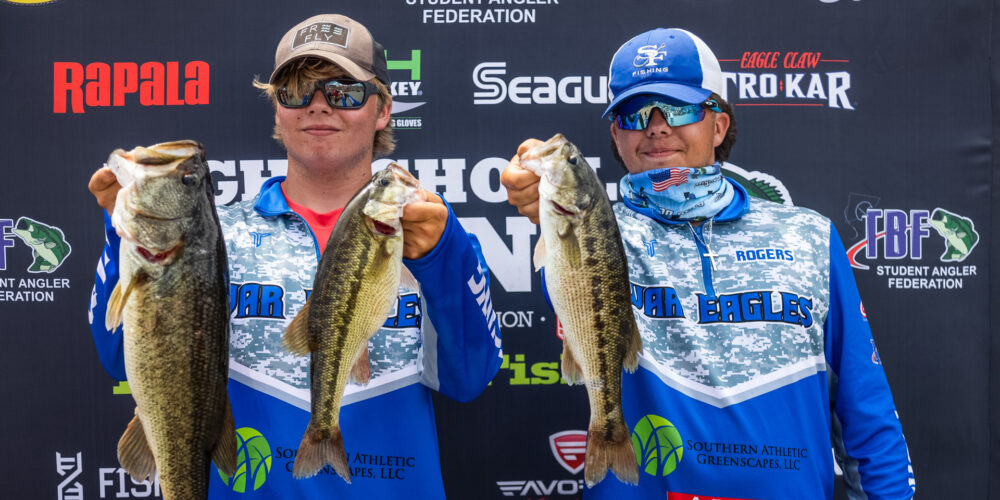 They were the 394th boat out of takeoff today, but after two days of competition, they sit in first place. Tallying three bass for 11 pounds, 9 ounces, the South Forsyth High School War Eagles duo of Jacob Rogers and William Ayscue moved to the top of the standings on Day 2 of the High School Fishing World Finals and National Championship. With a total of 19-6 for six fish, the team is 2 ounces ahead of the second-place Central High School Dragons team of Jerry Brumbaugh and Hunter Klotz who have totaled 19-4 through two days on Lake Hartwell.

“We knew we had to swing for the fences if we wanted to have a chance,” said Rogers. “We were mainly hunting for largemouth, and that’s when we caught our 6 1/2. Will actually caught him.”

“It was our third keeper of the day, and we were really needing one,” explained Ayscue. “I was throwing down the bank, and I saw the fish shoot out from nowhere and come after my buzzbait. It exploded on it. There was no feeling like it.”

Ayscue said he knew the fish was going to make it to the boat when he saw both the trailer and main hook embedded in its mouth. “He was stuck.”

Unlike Day 1 leaders Levi Seagraves and Blake Hooper, who fell to sixth today, Rogers and Ayscue aren’t Lake Hartwell locals; but they’re not from too far away, either. Based about 86 miles away on the shores of Lake Lanier, the duo said their experience on that other fabled body of water paid dividends today in South Carolina.

“There are more largemouth here and smaller spots than on Lanier,” added Rogers. “It’s kind of why we’re doing what we are doing. We have fished Hartwell before and our experience hasn’t been too great. We caught fish but just not the bigs.”

With rain and thunderstorms in the forecast, it’s anyone’s guess what the notoriously fickle Hartwell will deliver on Friday. The tournament leaders say they’re expecting things to change and are prepared to change their game plan if need be. One thing is for sure, they’ll be in a fight to hang on to first.

Going into Day 3, the Top 10 teams in the National Championship are set to compete in an all-out battle to claim high school bass fishing’s top crown. Rogers and Ayscue lead the pack, but the separation between first and tenth is exactly 3 pounds.

On Friday, those teams won’t have to worry about waiting in line to takeoff. They’ll be ushered to the front of the pack and given pole position to hunt for the morning bite.

“That’s what we were hoping to do today,” added Ayscue. “We were the fourth to last boat, and we were just hoping that we could find our morning bite and catch them big. We were lucky to be able to do that.”

“It feels like you are one of the pros out there with all of these boats,” said Rogers. “Usually, boat launching takes 15 minutes. Here, it can take an hour and a half.”

You can find complete results from Day 2 of the World Finals here and the National Championship here.