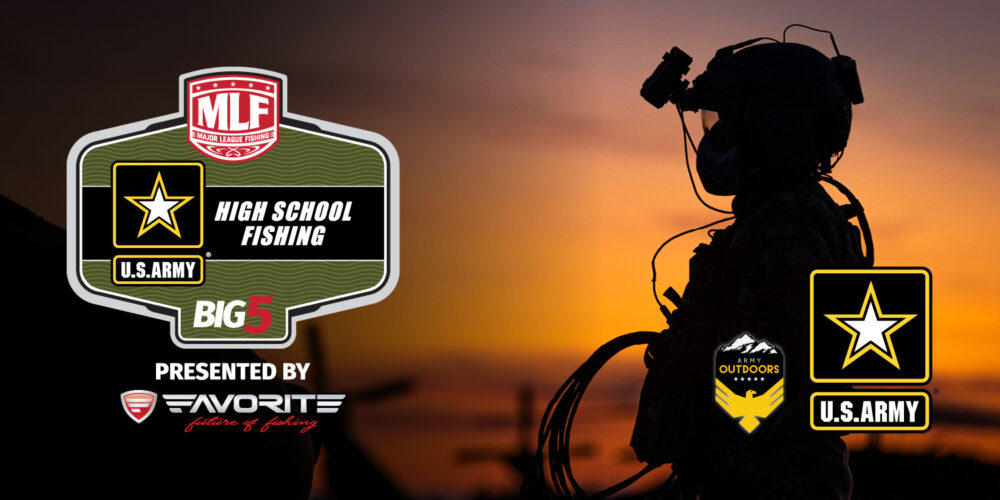 MLF announced today that the U.S. Army, the largest military branch in the United States with more than 700,000 soldiers – has signed on as the title sponsor for the 2021 season of MLF High School Fishing Presented by Favorite Fishing.

With multiple scholarship and advancement opportunities and a partnership with The Bass Federation (TBF) – including the opportunity to compete for more than $3 million in scholarships and prizes at the High School Fishing National Championship and World Finals – MLF High School Fishing Presented by Favorite Fishing is an excellent introduction to tournament bass fishing for teenage anglers.

“This partnership will allow the U.S. Army to connect with today’s outdoor enthusiasts across the United States,” said Sgt. 1st Class Andrew M. Benedict, Army Outdoor Team Leader. “We will share our experiences in the Army and demonstrate that you can serve your country while still pursuing your passions in the woods or on the water.

“We will also highlight how the U.S. Army assists soldiers in continuing the pursuit of their passions through programs such as Morale Welfare and Recreation (MWR) and others, where soldiers can rent equipment or book hunting expeditions around the world.”

“We are thrilled to welcome the U.S. Army and their Army Outdoors Team to our fishing family,” said Jim Wilburn, MLF President and CEO. “The U.S. Army’s diverse range of individual soldiers with unique backgrounds and heart-felt passions creates a seamless connection with the youth of today. We are excited to explore this partnership throughout the 2021 season and to continue to invest in our students across the nation.”

U.S. Army High School Fishing Presented by Favorite Fishing tournaments are two-person (team) events for students in grades 7-12 and are open to any SAF-affiliated high school team in the United States. The top 10 percent of each High School Open, TBF State Championship and TBF Challenge tournament held prior to June 14, 2021, will advance to the 2021 U.S. Army High School Fishing Presented by Favorite Fishing National Championship, held in conjunction with the High School Fishing World Finals June 30-July 3 on Lake Hartwell in Anderson, South Carolina. Launched by TBF in 2010, the World Final is the world’s largest open high school bass tournament, where student anglers compete for more than $3 million in scholarships and prizes.

U.S. Army Outdoors is the newest outreach team designed to Connect Americans with their Army.  Consisting of Soldiers from the Army Mission Support Battalion at Fort Knox, Kentucky, the group was formed to connect with the public through a shared passion for outdoor sports.

The U.S. Army’s foray into Major League Fishing builds on earlier success in eSports and Fitness, continuing to dispel the notion that Soldiers have no hobbies or interests, or time for them, outside of wearing the uniform. U.S. Army Outdoors, complete with its own branded fishing boat, is ready to hit the water, catch some fish and talk to the students about the opportunities open to today’s Soldiers.

After duty hours, Soldiers are free to pursue a range of activities both on and off Army installations, from fitness to crafts to outdoor recreation. The U.S. Army supports outdoor sports through recreation centers located across the country and individual installations including lakes for fishing, hunting areas, and areas for camping.

Founded in 2011, Major League Fishing (MLF) brings the high-intensity sport of competitive bass fishing into America’s living rooms on Outdoor Channel, Discovery, CBS, CBS Sports Network, World Fishing Network, Sportsman Channel and on-demand on MyOutdoorTV (MOTV). According to Nielsen ratings, Major League Fishing remains the number one series on Outdoor Channel for five years and MLF premiered as the number one outdoor show in their time slot on Discovery in 2019.