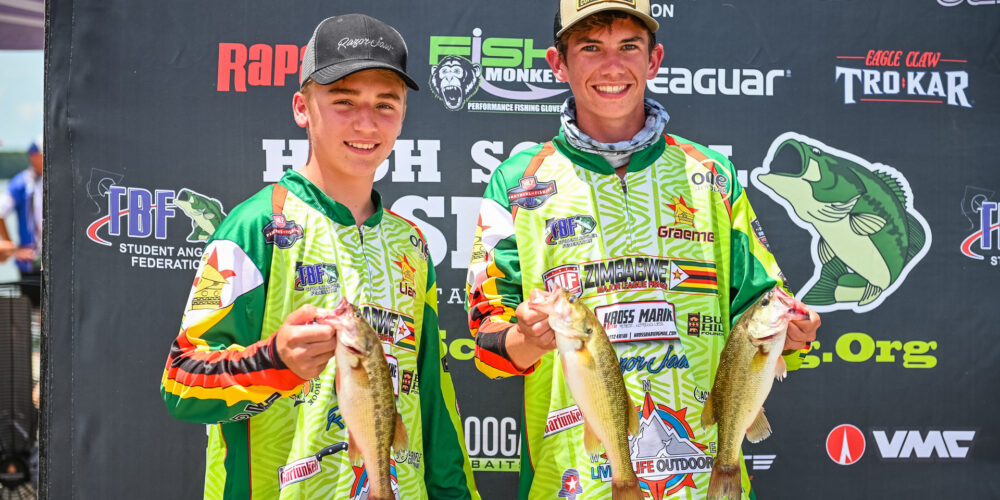 After 35 hours of airplanes and airports and more than 500 miles of Appalachian countryside, they made it—the MLF Zimbabwe team arrived at Lake Hartwell. With two coaches, two boats and four team members, they were ready to compete in the High School Fishing World Finals, being held this week—in conjunction with the National Championship – on a historic waterway that has hosted some of the biggest championship tournaments in bass fishing.

Only one thing was holding them back: They had no gear.

“The fishing here is completely different,” said team member Graeme Du Plooy, 17, who partnered with fellow Zimbabwean Liam Jones, 16, to weigh three fish for 3-8 on Day 1. “We didn’t bring any tackle from home. We left it all there and went to a store here to buy all new stuff.”

Du Plooy says the deep waters and scale of the 85-square-mile southern reservoir are a “completely different lake” from his home waters near Darwendale, Zimbabwe. That lake is shallow and full of grass, intermingled with some rocks. Largemouth bass records in the area exceed 18 pounds and average fish sizes in the 4- and 5-pound range are not unheard of.

Hartwell in June, by comparison, is tough and tame, with no poachers to keep an eye on and no rhinos lining the shore. For the most part, non-local anglers appear to be focusing on the lake’s deeper, offshore areas using techniques that vary wildly from shallow water, big bass hunting.

And while some teams fishing in the World Finals faced a shorter road to Hartwell, Du Plooy, who has only been bass fishing for about a year, says his crew feels they’ve earned their way here.

“We had three major events in Zimbabwe. The top four anglers from those events got picked to come to America for this competition.”

On the water, the obstacles extend beyond brand new tackle, brand new terrain and brand new techniques. As one can imagine, the local American dialects of the southeast take some adjustment.

“Our boat captain is from around here,” Du Plooy laughs. “So, sometimes he tells us to do something, and you don’t understand what he says. You eventually understand it, though.”

Du Plooy says bass fishing events in his home country generally cater to a smaller field of about 50 boats, compared to several hundred in the U.S., he’s excited to be stateside for the first time thanks to bass fishing.

Here, he’s noticed that there are more disparities than the quantities of trophy bass.

“First of all, COVID has had a big impact in Zimbabwe. The American embassy only opened six weeks before our flight, so it was quite tough to get here, but we got it done in the end. At home, everyone wears masks, there is a curfew from 6 to 6 and we have just gone into another lockdown. Vaccines are only available for people over 18, and it’s not easy to get one. They are very limited.”

In contrast, the United States Center for Disease Control dropped its face mask recommendations for vaccinated people on May 18. South Carolina lifted its own mask mandates for restaurants and state properties on March 5.

After the tournament, Du Plooy and Jones will head back to Africa on another multi-day journey. Unlike most of their American counterparts, the duo will head right back to school, which runs year-round. But this week, they’ll be guest stars in the United States, where they’ll continue to battle for worldwide recognition under the foothills of the Appalachian Mountains.

In addition to Du Plooy and Jones, the green, gold, red and black flag of Zimbabwe is being represented this week by fellow team members Jonny Bowen, 17, and David Berry, 16, who weighed three fish for 4-14 on Day 1. They are coached by John Herbst and Alex Berry.

Each proudly carries the golden image of a Zimbabwe Bird on their shoulder.