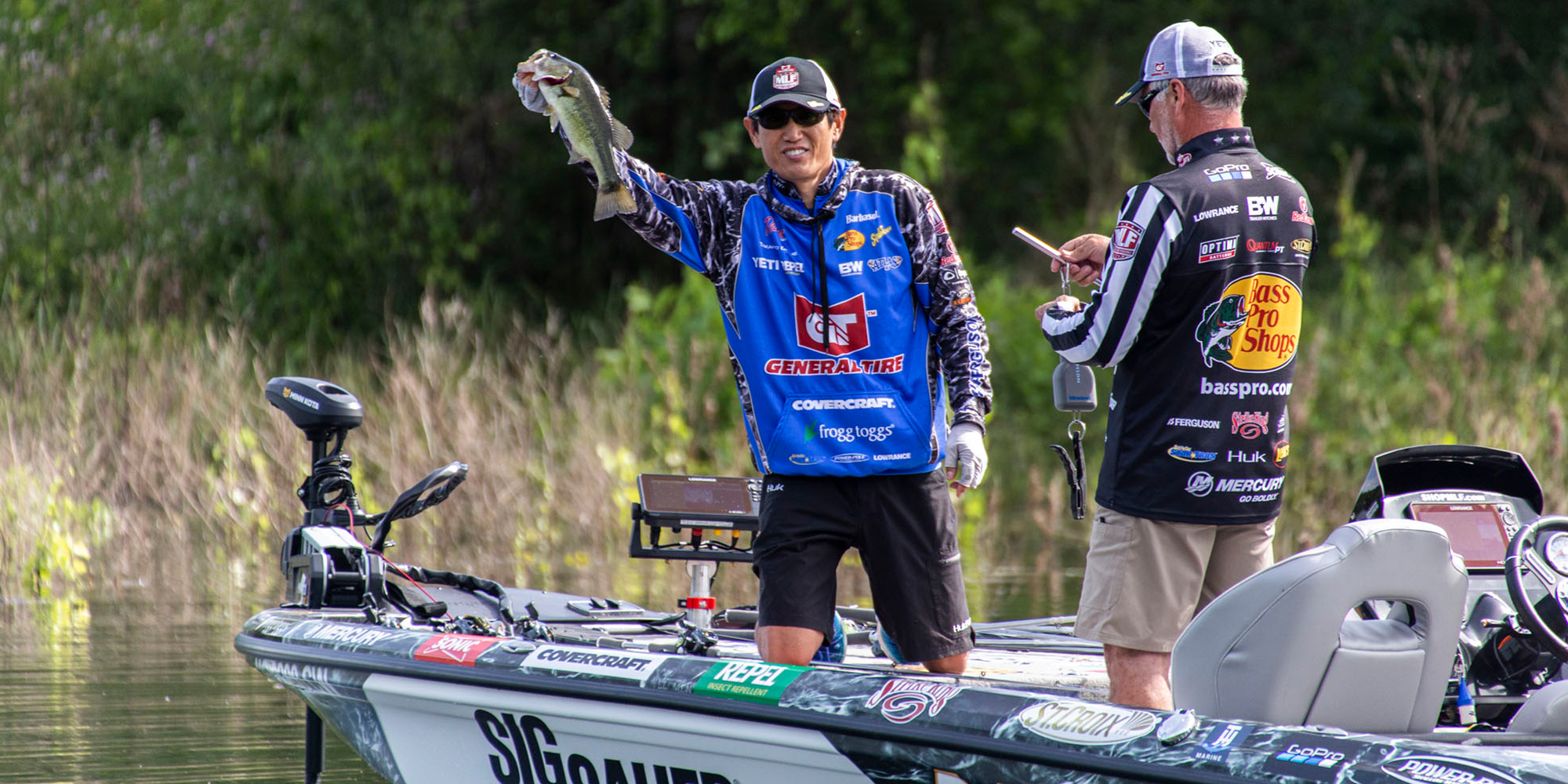 Takahiro Omori held on to a comfortable lead during Elimination Round 3 of the 2020 Challenge Cup. Photo by Phoenix Moore

MOUNTAIN HOME, Ark. – On a cloudy day on Bull Shoals Lake, the 10 anglers competing in Elimination Round 3 of the 2020 Lucas Oil Challenge Cup Presented by B&W Trailer Hitches found some crucial bites in some critical moments. After a long day of fishing, only six pros are moving on to the Sudden Death Rounds to meet the other 12 remaining anglers for a chance to win the 2020 Challenge Cup.

Takahiro Omori led from start to finish in Elimination Round 3, even though he decided to stop fishing an hour and a half before his day was officially over. Omori entered Period 3 with a 9-pound, 2-ounce lead over Anthony Gagliardi. After catching a 3-10 and a 2-4 in a five-minute swing, Omori decided that his lead over the Elimination Line was substantial enough for him to call it a day.

“I respect all of the guys that were fishing today, but I felt really comfortable with the lead I had built,” Omori said. “I wanted to go ahead and quit while I was ahead once I knew that I was going to make it to Sudden Death. I didn’t want the other guys to see what I was doing to be so successful.”

Omori ended up topping SCORETRACKER® with a 7-4 advantage over second-place Bobby Lane.

Arkansas pro Stephen Browning had a roller-coaster day in his home state. After zeroing in Period 1, Browning finally figured out a strategy in Period 2. Browning made his first couple of catches count, landing a 1-2 and a 3-15 while flipping flooded brush to get him on SCORETRACKER®. With around 10 pounds on the board, Browning made a prediction in the second period that would hold true.

“I just need to double my weight and I think I can make it,” Browning said.

With time winding down in Period 3, Browning found himself below the Elimination Line and in need of a bite to move him into the top six. The Arkansas pro set the hook on a 3-4 largemouth with under an hour remaining in the round to push him up SCORETRACKER® and secure a sixth-place finish with 19-9.

Fight for the Final Spot

Randy Howell held the sixth-place spot towards the end of Period 3 with 16-1. Edwin Evers was within a pound of catching Howell. With Evers’ proven MLF track record, Howell knew he needed to keep catching scorable bass if he wanted to hold Evers off.

Howell was able to end his day with two 2-pound bass off an offshore point to extend his lead over Evers and the rest of the anglers near the Elimination Line to finish in fifth place with 20-8.

End of the Road in Mountain Home

Takahiro Omori, Bobby Lane, Anthony Gagliardi, Jared Lintner, Randy Howell and Stephen Browning will be moving on to the Sudden Death Rounds. Adrian Avena, Edwin Evers, Alton Jones and Mark Rose have been eliminated from the 2020 Challenge Cup. Evers will compete in the remaining three MLF Cup events. Rose will fish in the Patriot and Heritage Cups. Avena will participate in the Summit Cup and Jones the Heritage Cup.

The 2020 Challenge Cup continues on Saturday, Jan. 25 at 2 p.m. ET with Sudden Death Round 1 on Outdoor Channel.