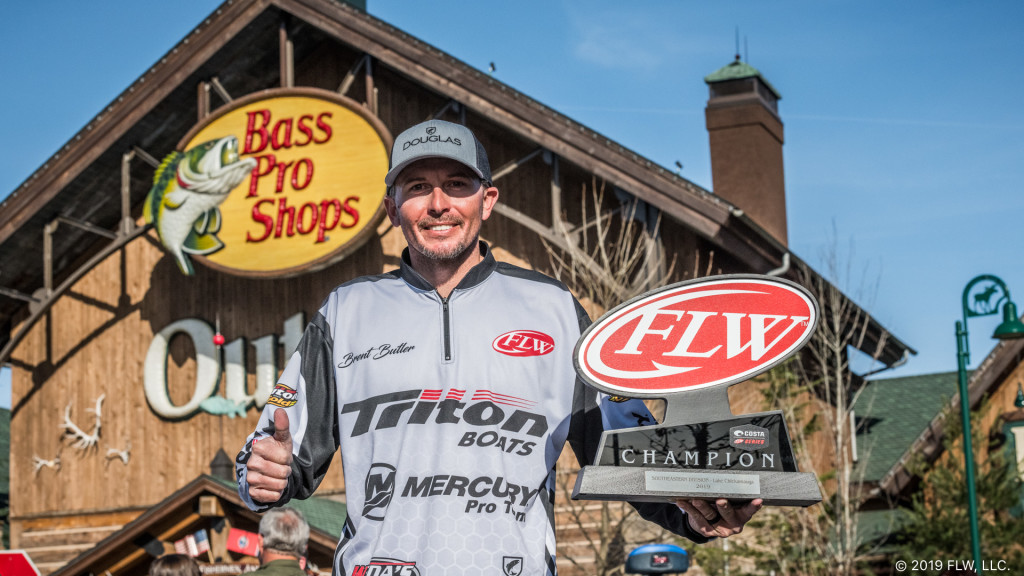 DAYTON, Tenn. – Fishing in his sixth event with Fishing League Worldwide (FLW), pro Brent Butler of Vonore, Tennessee, caught a five-bass limit Saturday weighing 16 pounds, 11 ounces, to win the Costa FLW Series at Lake Chickamauga presented by T-H Marine. Butler’s three-day total of 15 bass weighing 68 pounds, 8 ounces, was enough to earn him the victory at the Southeastern Division tournament and a check for $45,800.

In route to victory, Butler posted an above-average start to the tournament Thursday, catching 14 pounds of bass to sit in 40th place. He said he put together his limit fishing shallow bars and shell beds mid-lake, with a ½-ounce, chrome-colored Strike King Red Eye Shad crankbait.

Heading into Friday, Butler said he knew he needed more weight to have a shot at winning. He switched patterns completely, fishing seven new areas near major creek mouths, and produced a 37-pound, 5-ounce haul – the fifth-largest limit in FLW Series history.

“All I was catching [Thursday] was buck bass, and with 14 [pounds] and change, I knew I needed to swing for the fences,” said Butler, who earned his first win in FLW competition. “I started looking for staging areas for both prespawn and postspawn females. I went offshore, and honestly, I got my timing down and saw what the bait was doing – how it was hanging out off of ledges and things of that nature. I just kept paying attention to it and the wind direction and I would occasionally see them on the graph and knew they were in the area. They were following gizzard shad. I sat in 30 feet and caught them out of 15 feet of water.

“I think they were heading in [prespawn], but the two big ones – two 10-plus pounders – were postspawn,” continued Butler. “I caught them almost on back-to-back casts.”

Butler said he had seven bites Friday. He said he used a custom Super G Lures umbrella rig with 4.3-inch, shad-colored Keitech swimbaits to catch three of the monster limit and a chartreuse and shad-colored Lucky Craft Flash Pointer 100 jerkbait for the other two.

On Saturday, Butler didn’t catch nearly as much weight as he did Friday, but was able to put together the right bites at the end of the day.

“I ran those areas again today, and I saw the bait down in the creek and river channels. I only saw one school of gizzard shad come up under my graph in 15 of water and I could see two [bass] following it, but I couldn’t get them to cooperate. That was the only school I saw out of all those areas.”

With only one small bass in the boat at 1 [p.m.], Butler again made a change, running 32 miles to fish shallow ledges with stumps between the Highway 60 bridge and Mud Creek. He caught a couple more fish on the umbrella rig, one on the Red Eye Shad and three on the Lucky Craft jerkbait.

One of Butler’s giants on Friday weighed 11 pounds, 10 ounces, and was the biggest of the tournament in the Pro Division. For his catch, Butler also earned the day’s Boater Big Bass award of $300.

Scott Ostmann of Cincinnati, Ohio, won the Co-angler Division with a three-day total catch of 15 bass weighing 54 pounds, 12 ounces. For his win, Ostmann took home a prize package including a Ranger Z175 with a 115-horsepower outboard motor and $5,000.

Scott Towry of Lawrenceburg, Tennessee, caught the biggest bass of the tournament in the Co-angler Division Friday, a behemoth largemouth weighing 11 pounds, 2 ounces. For his catch, Towry earned the day’s Co-angler Big Bass award of $200.