Lake Chick Kicks Out 12 Limits in Excess of 20 Pounds 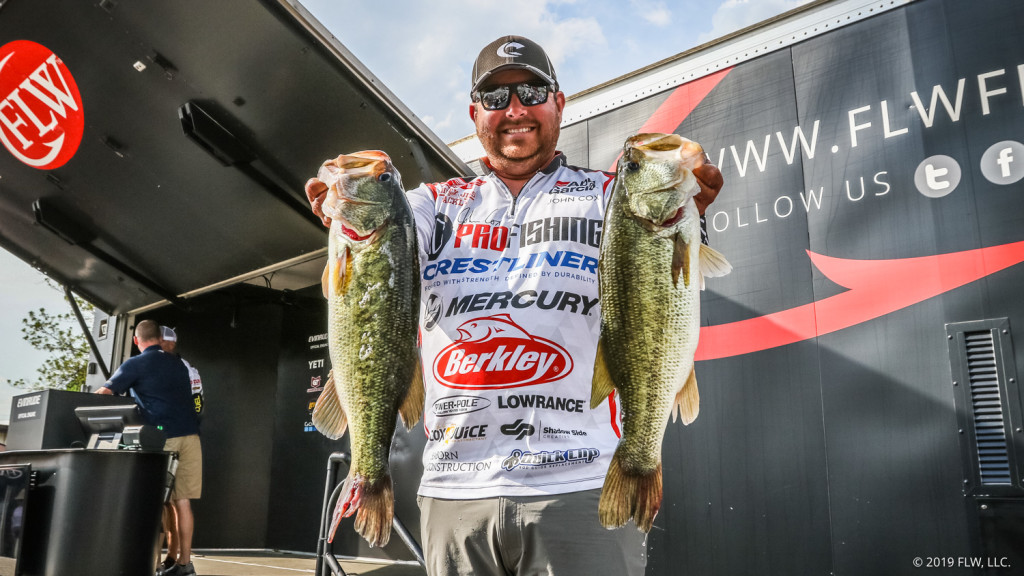 DAYTON, Tenn. – A field of 165 of the best bass-fishing professionals in the world began their four-day competition for a top award of $125,000 at the FLW Tour at Lake Chickamauga presented by Evinrude Thursday in Dayton, Tennessee.

“This place is just awesome,” said Cox, a six-time FLW Cup qualifier. “I started out on a real big fish that I had marked in practice – she’s at least a 10 (pounder) – but I couldn’t catch her. I got frustrated and bailed and went and caught a few decent males that I had marked, then came back to her. I caught the male with her, which was a 4-pounder, so I kept it at the time. Then she left.

Cox said he caught six keepers– all sight fishing – but marked 10 more while looking for beds this afternoon. He said he caught his bass using a selection of Berkley PowerBait MaxScent plastics.

“It was not easy today,” Cox said. “The water is coming up and a lot of the banks are getting really stirred up. The visibility is gone on almost every spot that I stopped at. I was guessing as to where they were.

“I’m going to go out tomorrow and try to catch five more decent males and hope I can get lucky and catch a 9- or 10-pounder,” Cox went on to say. “I will stop in and see if the big female I have marked is ready, then after that I really don’t know what I’m going to do yet.”

The top 10 pros after day one on Lake Chickamauga are:

McCaghren earned Thursday’s $500 Big Bass award in the pro division after bringing a 9-pound, 13-ounce largemouth to the scale – the largest fish of the day.

In FLW Tour competition, the full field of 165 pro anglers compete in the two-day opening round Thursday and Friday. The top 30 pros based on their two-day accumulated weight advance to Saturday. Only the top 10 pros continue competition Sunday, with the winner determined by the heaviest accumulated weight from the four days of competition.

The total purse for the FLW Tour at Lake Chickamauga presented by Evinrude is more than $860,000. The tournament is hosted by Fish Dayton and the Rhea Economic Tourism Council.

In conjunction with the weigh-ins, FLW will host a free Family Fishing Expo at the Dayton Boat Dock from 2 to 6 p.m. each day. The Expo is a chance for fishing fans to meet their favorite anglers, enjoy interactive games, activities and giveaways provided by FLW sponsors, and learn more about the sport of fishing and other outdoor activities.

Also for youth, the FLW Foundation’s Unified Fishing Derby will be held at the Dayton Boat Dock on Saturday, May 4, from Noon-2 p.m. The event is hosted by FLW Foundation pro Cody Kelley along with other FLW Tour anglers, and is free and open to anyone under the age of 18 and Special Olympics athletes. Rods and reels are available for use, but youth are encouraged to bring their own if they own one. The 1st and 2nd place anglers that catch the biggest fish will be recognized Saturday on the FLW Tour stage, just prior to the pros weighing in.

Television coverage of the FLW Tour at Lake Chickamauga presented by Evinrude will premiere in 2019. The Emmy-nominated "FLW" television show airs each Saturday night at 7 p.m. EST and is broadcast to more than 63 million cable, satellite and telecommunications households in the U.S., Canada and the Caribbean on the World Fishing Network (WFN), the leading entertainment destination and digital resource for anglers throughout North America. FLW television is also distributed internationally to FLW partner countries, including Canada, China, Italy, Korea, Mexico, Portugal, Spain and South Africa.

The popular FLW Live on-the-water program will air on Saturday and Sunday, featuring live action from the boats of the tournament’s top pros each day. Host Travis Moran will be joined by FLW Tour veteran Peter Thliveros to break down the extended action each day from 8 a.m. to 2 p.m. On-the-water broadcasts will be live streamed on FLWFishing.com, the FLW YouTube channel and the FLW Facebook page.