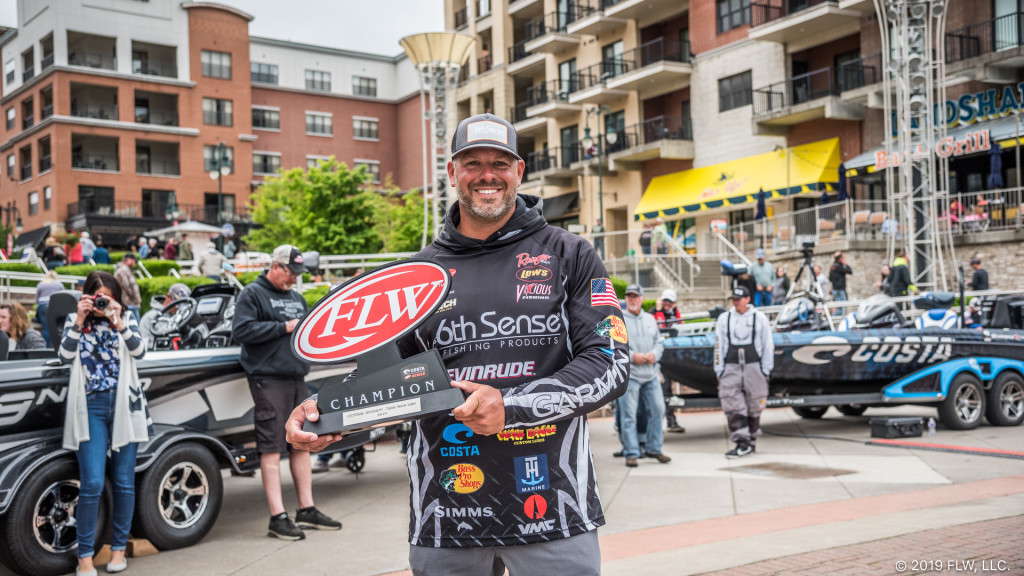 Olliverson said that he fished two main patterns throughout the week, targeting smallmouth in the morning before flipping for largemouth in bushes in the afternoon.

“Every morning I’d start out fishing for smallmouth and would spend 2 to 5 hours doing that,” said Olliverson, who earned his first career victory in FLW competition. “Then I’d go flipping in the bushes for largemouth. I’d have done that the whole time, but I just couldn’t get a largemouth bite going early.”

Targeting offshore areas off points on the lower end of the lake, Olliverson caught a limit of smallmouths on Thursday throwing a Keitech Swing Impact FAT 3.3 swimbait on a 6th Sense Divine Swimbait Jighead and a 6th Sense Dogma 115 topwater bait, on which he replaced the back hook with a feathered VMC treble.

From there, he went flipping a beaver-style bait to shallow brush from Kimberling City to the mouth of the rivers, catching a pair of culling largemouths.

Friday was more of the same, but Olliverson noticed his morning smallmouth bite really never got going until after 8 a.m. Saturday, Olliverson only spent an hour on his smallmouths, catching one keeper before heading shallow to flip. Yet, he never got out his flipping rod.

“Before I flipped, I picked up the Dogma topwater and was throwing it around the bushes and a 3-pounder ate it,” Olliverson said. “From there I just kept the topwater in my hand and covered a ton of water.

“I think the key for me this week was trusting my instinct and trusting the Good Lord,” Olliverson went on to say. “It’s weird, but I felt like I was led this entire week. I’d be running down the lake and it was like there was a voice telling me to ‘turn around, that looked good.’ I’ve got a lot of experience here and I was fishing random places that I’d never fished before. And I was catching big ones. It was truly an amazing week.”

Wood weighed a 6-pound, 11-ounce bass Thursday – the heaviest of the tournament in the Pro Division – and earned the day’s Boater Big Bass award of $278.

Scott Parsons of Rogers, Arkansas, won the Co-angler Division with a three-day total of 15 bass weighing 36 pounds, 9 ounces. For his win, Parsons took home the top prize package of a new Ranger Z175 boat with a 115-horsepower outboard motor.

Caleb Chapman of Dawson Springs, Kentucky, caught the biggest bass of the tournament in the Co-angler Division Thursday, a fish weighing 5 pounds, 10 ounces. Chapman earned the day’s Co-angler Big Bass award of $185 for his catch.