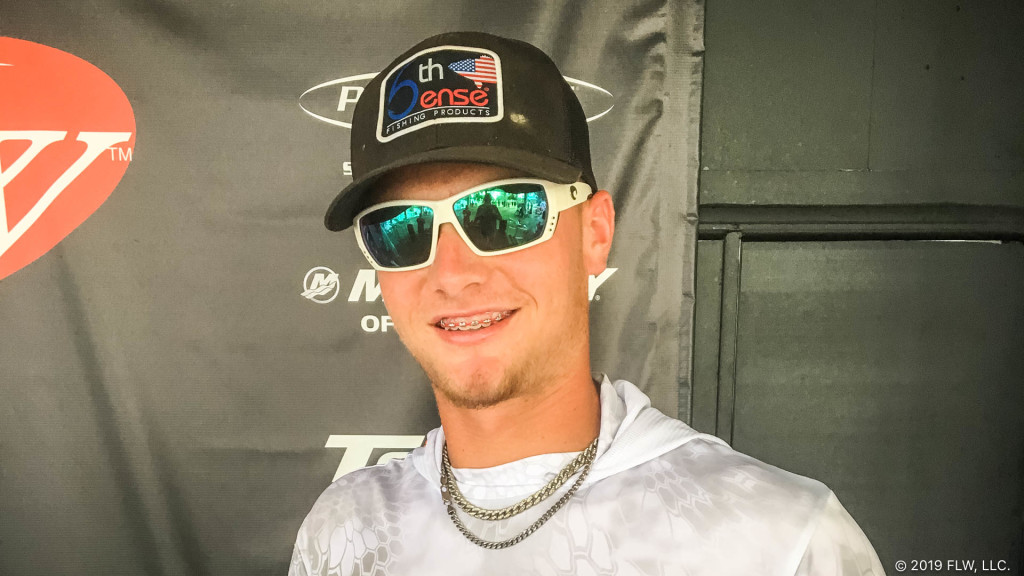 Ganey said he primarily flipped hay grass and bushes in two areas to catch his fish. His first area – in Mill Creek – only gave up one keeper. It was his second stop, though, that really jumpstarted his day.

“I ran up to my second area across the lake from Mill Creek around 9 [a.m.], flipped in a bush, and within five flips I caught an 8-pounder,” said Ganey, who notched his first victory in FLW competition. “That set the tone. I knew I had a good chance to place in the top five with a kicker like that.

“Within another hour I filled my limit,” continued Ganey. “I culled three times – all in that second area. I got a lot of big bites there in practice and kept getting fish that I needed there Saturday.”

Ganey said he used Watermelon Red Flake-colored Strike King Rage Tail Denny Brauer Structure Bugs, rigged with either ¾- or 1-ounce weights depending on how thick the cover was. He threw them on a trio of Duckett White Ice Casting rods with 13 Fishing Concept “A” casting reels, spooled with 65-pound-test PowerPro Spectra braided line.

“The rods were strong and really helped me pull those fish out of the bushes – they have a great backbone on them.”

Ganey’s big kicker bass ended up weighing 8 pounds, 9 ounces – the heaviest of the event in the Boater Division – and earned him the day’s Boater Big Bass award of $655.

Leblanc caught the heaviest bass in the Co-angler Division, a fish weighing in at 7 pounds, 8 ounces. The catch earned him the day’s Co-angler Big Bass award of $327.

The tournament was hosted by the Jasper County Development District.