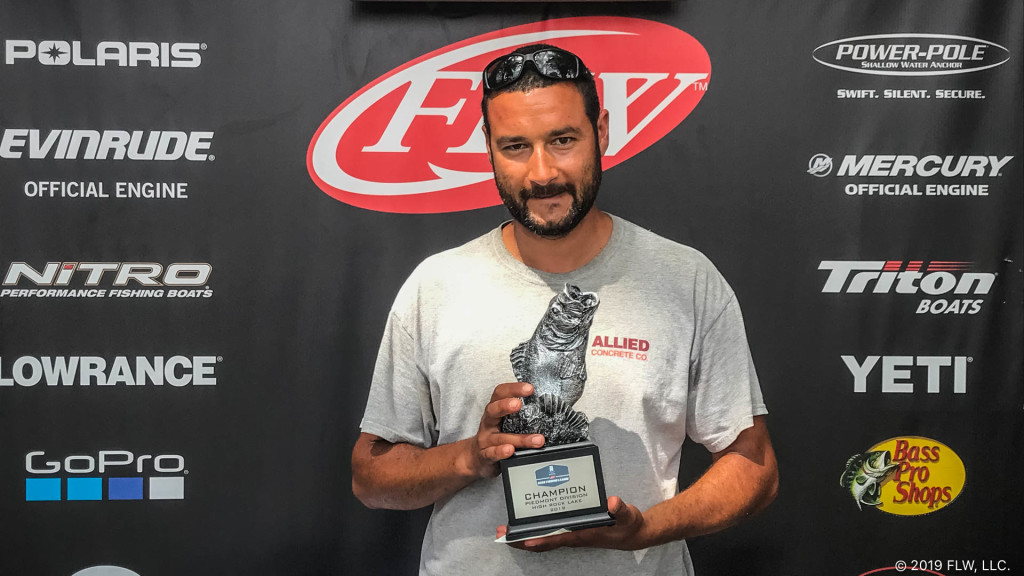 “I started out at a point where I’d caught a 5-pounder in practice Friday, but didn’t catch anything,” said Villa, who earned his first career victory in FLW competition. “I was planning on fishing the shoreline there, but eight to 10 boats showed up and after an hour and a half, I didn’t have anything and I didn’t see anyone else catching anything.

“I jumped across the cove within eyeshot of the first area, flipped a laydown and caught a 2-pounder,” continued Villa. “I went down the shoreline and lost a 5-pounder. I went further down and at the next point, caught a 6-pounder and lost a good one off of a boat dock.”

Villa said he stayed in the same southwestern arm of the lake as Tamarac Marina, the same marine where the field launched from, and that he eventually caught 12 keepers throughout the day.

“I essentially junk-fished and realized after eight or nine catches that everything was on points,” said Villa. “You had to look for the dominant piece of structure on the point to catch fish – it didn’t matter if it was wood, rock or a dock. I steadily caught fish throughout the day and made my last cull at 12:30 [p.m.], which put me at about 20 pounds.”

Villa’s key baits included a Texas-rigged Zoom Brush Hog with a 5/16-ounce Strike King Tour Grade tungsten weight and a Zoom Trick Worm in Green-Pumpkin and Red and Redbug colors. The lures were rigged on 17-pound-test Gamma Edge fluorocarbon line. Villa said he also threw the Trick Worm with a 1/8-ounce Strike King Tour Grade shaky-head rig, on a Carolina-rig and weightless depending on the circumstances.

“I have [Garmin] Panoptix on my boat and I noticed that fish were all up underneath the trolling motor, including some big ones,” said Villa. “So, I’d throw that worm weightless and they’d get it as soon as it hit the water.”

Ben Reynolds of Callands, Virginia, caught a bass weighing 6 pounds, 7 ounces – the heaviest of the event in the Boater Division – and earned the day’s Boater Big Bass award of $465.

Pettiford caught the heaviest bass in the Co-angler Division, a fish weighing in at 8 pounds, 6 ounces. The catch earned him the day’s Co-angler Big Bass award of $232.