Louisiana pro targets largemouth, weighs sole 22-pound limit to sit atop the leaderboard after Day One 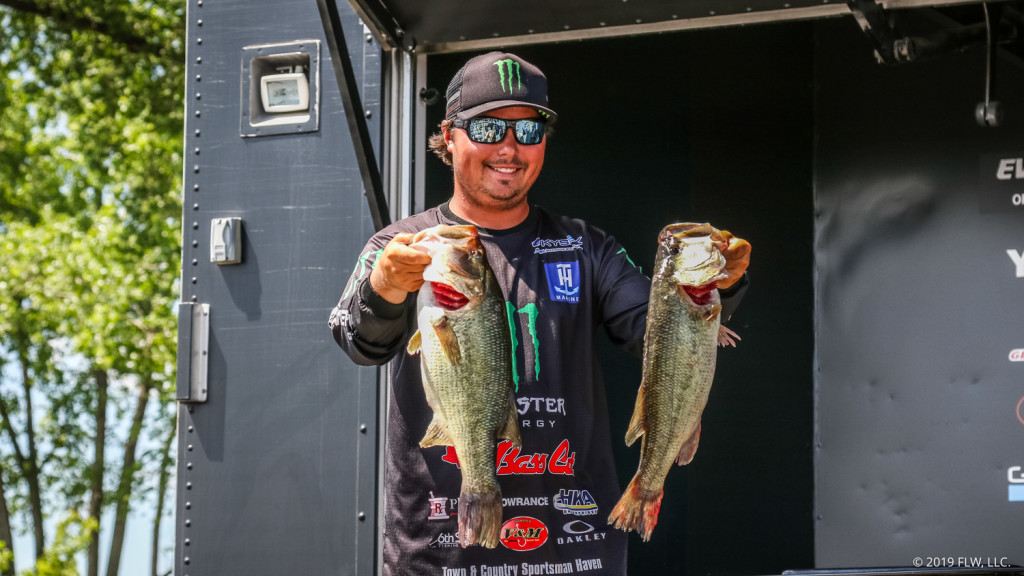 PLATTSBURGH, N.Y. – Pro Tyler Stewart of West Monroe, Louisiana, caught a five-bass limit weighing 22 pounds, 3 ounces to sit atop the leaderboard after day one of the FLW Tour at Lake Champlain presented by T-H Marine. Tied for second place with 20-7 are pros John Voyles of Petersburg, Indiana, and Tom Redington of Royse City, Texas. The full field of 163 anglers, who are casting for a top award of up to $125,000, will continue competition Friday on day two, with just the top 30 fishing Saturday and the final 10 competing Sunday.

“On the first day of practice, I spent the whole day [focusing] on largemouth. On day two, I tried smallmouth, but just really couldn’t anything going,” said Stewart, a second-year FLW Tour pro. “On the third day of practice I focused on largemouth again and got a little something going, and that’s kind of what I ran with today.

“It started happening pretty quick [this morning]. I caught my weight by like 10:30 [a.m.],” continued Stewart. “I had a 2-pounder in my livewell, and at 11, I caught a 4-pounder that culled, then I left. I’m keeping a flipping stick in my hand all day. I only have a couple of small areas and that’s basically what I’m doing – flipping them up in pretty shallow water.”

Stewart said he caught around 10 keepers throughout his day. He did weigh one smallmouth, a fish he caught after leaving his primary areas.

“I ended up making a quarter-pound cull, which could be pretty crucial,” said Stewart.

The top 10 boaters after day one on Lake Champlain are:

Ryan Salzman of Huntsville, Alabama, earned Thursday’s $500 Big Bass award after bringing a 5-pound, 12-ounce bass to the scale – the largest fish of the day.

In FLW Tour competition, the full field of 163 pro anglers compete in the two-day opening round on Thursday and Friday. The top 30 pros based on their two-day accumulated weight advance to Saturday. Only the top 10 pros continue competition Sunday, with the winner determined by the heaviest accumulated weight from the four days of competition.

The total purse for the FLW Tour at Lake Champlain presented by T-H Marine is more than $860,000. The tournament is hosted by the City of Plattsburgh and the Adirondack Coast Visitors Bureau.

In conjunction with the weigh-ins, FLW will host a free Family Fishing Expo at Plattsburgh City Marina from 2 to 6 p.m. The Expo is a chance for fishing fans to meet their favorite anglers, enjoy interactive games, activities and giveaways provided by FLW sponsors, as well as learn more about the sport of fishing and other outdoor activities.

Also for youth, the FLW Foundation’s Unified Fishing Derby will be held at Wilcox Dock, located at 90 Cumberland Ave., in Plattsburgh, on Saturday, June 29, from Noon-2 p.m. The event is hosted by FLW Foundation pro Cody Kelley along with other FLW Tour anglers, and is free and open to anyone under the age of 18 and Special Olympics athletes. Rods and reels are available for use, but youth are encouraged to bring their own if they own one. The 1st and 2nd place anglers that catch the most fish will be recognized Saturday on the FLW Tour stage, just prior to the pros weighing in.

The popular FLW Live on-the-water program will air on Days Three and Four of the event, featuring live action from the boats of the tournament’s top pros each day. Host Travis Moran will be joined by veteran FLW Tour pro Todd Hollowell to break down the extended action each day from 8 a.m. to 2 p.m. On-the-water broadcasts will be live streamed on FLWFishing.com, the FLW YouTube channel and the FLW Facebook page.