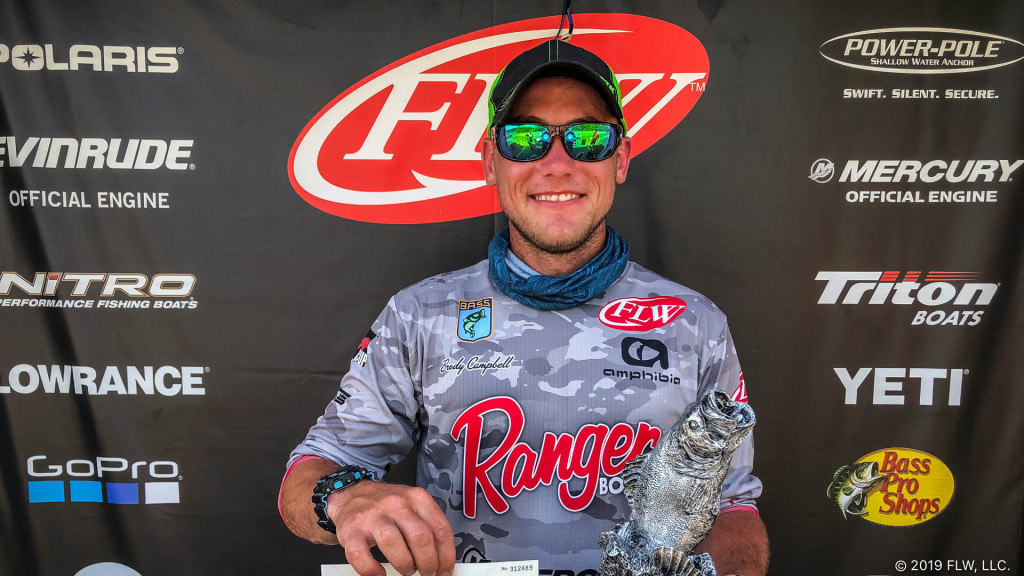 “I should have won the BFL tournament on Saturday as well, but I had a few dead fish penalties – it was very hot – and I finished second,” said Campbell, who earned his third BFL victory of the season on Sunday. “I went back out on a mission.

“I started the day targeting early-morning schooling fish by the dam for an hour or so, then I ran up to the North Fork area and flipped flooded willow bushes,” Campbell said. “I caught around 20 fish in that first hour, but there were a lot of little ones. North Fork was a lot tougher, and I only had three or four bites there.”

Campbell said he threw a Heddon Zara Spook and a fluke while targeting the schooling fish, then flipped a green-pumpkin-colored Strike King Rodent and a ½-ounce peanut butter and jelly-colored jig with a green-pumpkin Strike King Rage Craw trailer to the willow bushes.

“I think the key to my victory was just capitalizing on the bites that I did get,” Campbell went on to say. “I was around fish, but I only had four or five keeper bites all day. It was tough, it was hot. And it was important that I landed every keeper fish that bit.”

Kalen caught a bass weighing 4 pounds, 12 ounces – the heaviest of the event in the Boater Division – and earned the day’s Boater Big Bass award of $300.