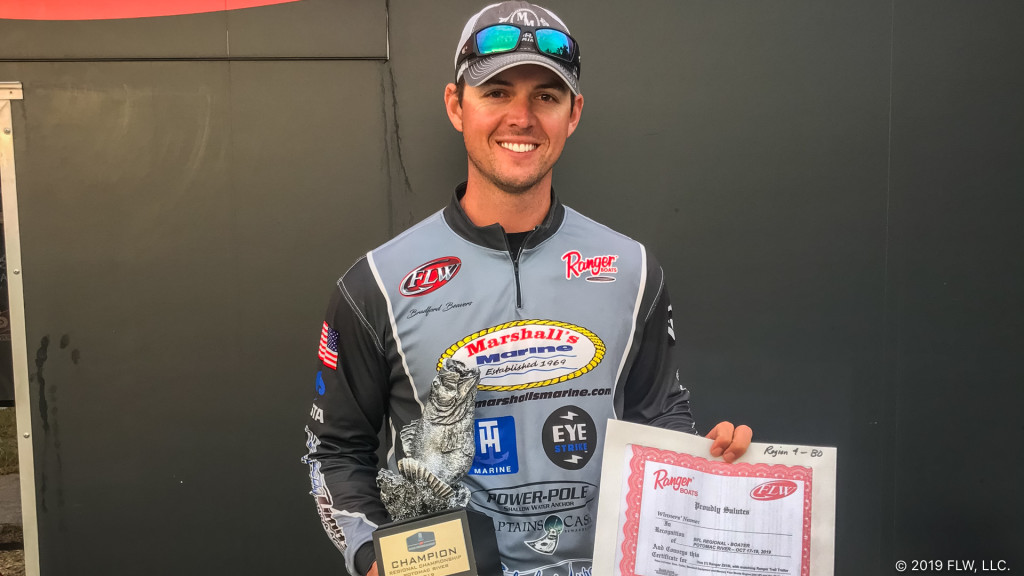 MARBURY, Md. – Summerville, South Carolina’s Bradford Beavers, brought a two-day total of 10 bass to the scale weighing 28 pounds, 8 ounces, to win the weather-shortened, no-entry fee T-H Marine FLW BFL Regional Championship on the Potomac River Saturday. The event was originally scheduled for three days, but tournament officials canceled competition on day one due to significant winds. For the win, Beavers earned $71,200, including a new Ranger Z518L with a 200-horsepower Mercury or Evinrude outboard and automatic entry into the 2020 BFL All-American Championship, April 30-May 2, at Lake Hartwell in Anderson, South Carolina.

The cold front and significant winds didn’t just cancel the first day of the event; they drastically changed water levels and left anglers scrambling for any semblance of a pattern. A total of 37 pros never weighed in a fish either day, and Bradford Beavers sure felt like he might be one of them when he got to his planned starting spot and found it on dry ground. Yet, a little luck can go a long way in an event like that, and he got just the right amount of luck.

The FLW Tour pro found a magic pass through a grass flat that accounted for the majority of his weight, as he caught 13-15 and 14-9 over two days to win with a total of 28-8.

“I don’t really know why they were there,” said Beavers, who earned his fifth career victory in FLW competition. “There was nothing really different. But if I had gone 50 yards in either direction, I never would’ve found them.”

Beavers had only been to the Potomac once before – five years ago – for a Costa FLW Series event in the summertime. So he spent the majority of practice refamiliarizing himself with the fishery. Overall, practice was OK, and he figured he at least identified a starting spot for Thursday.

Then the storm happened, with winds gusting so hard the river went from flood stages to as low as what even locals had ever seen. Bryan Schmitt, who finished third in this event, guides on the river and said he’d never seen the Potomac change that much so quickly.

“The place was a mud hole,” added Beavers, who never ventured more than five miles from takeoff. “I was afraid I’d get stuck at blastoff because we were kicking up mud. I got to my first spot and it was practically dry. So I went to another spot that was a little deeper. I was fishing around, not catching anything, so I started fishing my way out because it was too shallow.”

As he fished his way out, he caught his first keeper. And then he caught another, and another, and another. He landed four keepers by 9:15 a.m. from a 50-yard stretch by alternating between a 1/2-ounce white spinnerbait and a black-and-blue homemade vibrating jig thrown on Dobyns Champion 734 C rods.

Beavers fished another five hours without a single bite, making it pretty easy for him to know where he’d be starting on Saturday.

“I lined up and made the exact same pass, and I had a limit by 9:30 a.m.,” said Beavers of the final morning. “It wasn’t a flurry or anything. You just had to grind and fish for them; make a lot of casts and eventually you ran into one.”

By the time Saturday was over, Beavers had managed to land nine keepers, with seven coming from that magic 50-yard stretch, to help him close out his season with consecutive victories.

“I won the BFL on Lake Hartwell in September to qualify for the Regional Championship,” said Beavers. “So, I’m extremely surprised and extremely satisfied to win the Regional. It’s the best way to end my season.”

Mark Blankenship of Christiansburg, Virginia, weighed in 10 bass over two days totaling 21 pounds, 3 ounces to win the top co-angler prize package of $50,200, including a new Ranger Z518L with a 200-horsepower Mercury or Evinrude outboard.

The T-H Marine FLW BFL Regional Championship on the Potomac River was hosted by the Charles County Board of Commissioners. It featured the top pros and co-anglers from the Buckeye (Ohio), Northeast (Maryland-New York), Piedmont (North Carolina-Virginia), and South Carolina divisions.