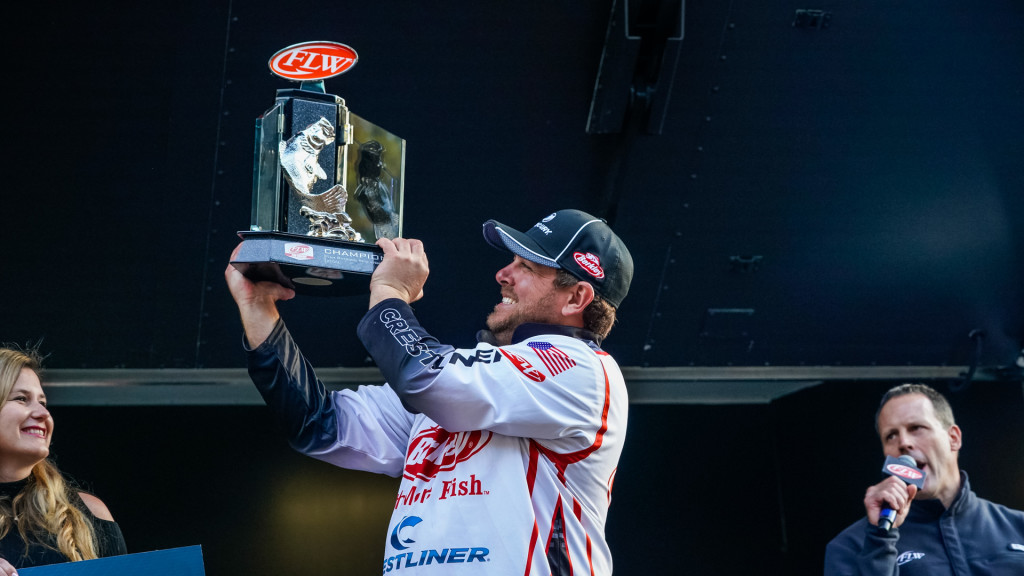 Cox weighed a five-bass limit totaling 12 pounds, 9 ounces to win with a wire-to-wire victory at the Tackle Warehouse Pro Circuit at Sam Rayburn Reservoir. Cox’s four-day total of 65-15 was enough to get the win by a 2-pound, 7-ounce margin and earn his fifth career victory in FLW pro-level competition. Each of those five victories have come from a different fishery and a different state.

“This was the best win I’ve ever had,” said Cox, who moved into a tie with David Dudley at No. 6 all-time with five career wins. “I usually start off the year pretty slow and get better through the season. To start the season with a win, I don’t even know what to say. I’m so thankful – this is just incredible.”

Cox caught all of his fish on the first two days of competition at one specific spot, making one specific cast with one specific bait. He described the area as a 3-foot high spot with a little bit of sand and rock with hydrilla all around it, right at the mouth of one of the best-known spawning creeks on Sam Rayburn.

“I had to make the same cast the entire time,” Cox said. “I could feel the crankbait come over their backs – it felt like logs – and then one would just smoke it.”

After mining the same spot for the first two days with a Berkley Frittside 5 Crankbait (Lone Ranger- and Ghost Morning Dawn-colored), the area fizzled on Saturday. Cox was forced to scramble for the final two days of competition, but in true John Cox-fashion he was able to find just enough weight to hang on and earn the win.

“The last two days have been the hardest that I’ve ever had to grind, ever, just to catch a limit,” Cox said. “Coming back to the weigh-in today, I thought I had blown it.”

“The key was definitely the Frittside crankbait and catching all of them on that spot,” Cox went on to say. “I didn’t even own a crankbait rod until this year.”

Overall there were 44 bass weighing 108 pounds, 8 ounces caught by pros Sunday. Seven of the final 10 pros weighed in five-bass limits.

In Tackle Warehouse Pro Circuit competition, the full field of 154 pro anglers competed in the two-day opening round Thursday and Friday. The top 30 pros based on their two-day accumulated weight advanced to fish Saturday. Only the top 10 pros continued competition Sunday, with the winner determined by the heaviest accumulated weight from the four days of competition.