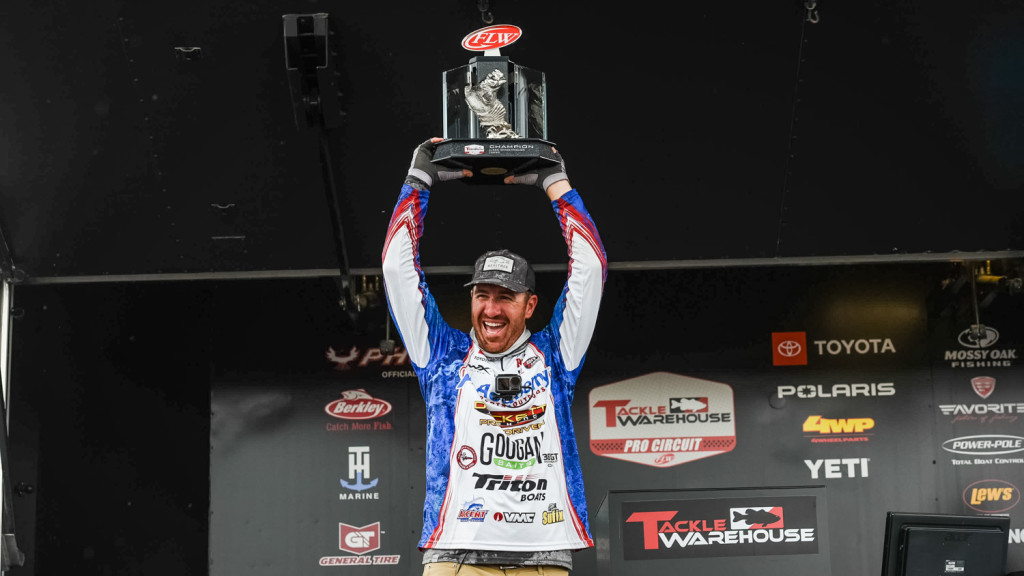 “It’s been an unbelievable week,” said Wheeler, who notched his fifth major win since the start of the 2019 season. “I put more time in (practice) for this event than any other event that I’ve fished. To get the win here means so much to me. On my home lake. In front of my best friends and family. With FLW, the organization that I started with and the people that watched me grow up. This one means the world to me.”

Wheeler said he used a variety of baits to catch his fish this week, including Rapala DT-20 (Citrus Shad) and DT-16 (Big Shad) crankbaits, an 8-inch green-pumpkin-colored worm, a 5/8-ounce white hairjig, a scrounger with a soft-plastic jerkbait trailer, a jig, an unnamed topwater bait, and a vibrating jig.

“I knew that I had to keep an open mind and I couldn’t get locked into one particular bait,” Wheeler said. “There was no magical bait. That’s why I had so many different rods on my deck each day. I was able to trigger some of those really good bites by rotating through them.”

Wheeler estimated that he fished around 50 spots throughout the week but had three areas that were really key for him. While many pros focused solely shallow or deep, Wheeler constantly switched between the two over the course of the event.

“Each place was so unique,” Wheeler said. “The areas were completely different. It’s not like it was a pattern. It was just finding places that were a little bit less obvious was really what it came down to. Those fish weren’t as pressured and easier to get to bite. That was my game plan the whole week.

Overall there were 50 bass weighing 149 pounds, 14 ounces caught by pros Friday. All of the final 10 pros weighed in five-bass limits.

The Tackle Warehouse Pro Circuit at Lake Chickamauga was hosted by Fish Dayton and the Rhea Economic & Tourism Council.

In Tackle Warehouse Pro Circuit Super Tournament competition, the full field of 204 pro anglers competed in the two-day opening round on Tuesday and Wednesday. The top 50 pros based on their two-day accumulated weight advanced to Thursday. Only the top 10 pros continued competition on Friday, with the winner determined by the heaviest accumulated weight from the four days of competition.